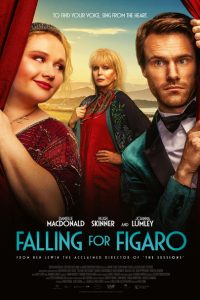 I was on an airplane and everyone knows that you watch movies on airplanes that you don’t normally watch at home (at least that’s true for me!). As I scrolled through the list, an image popped out at me. The cover was striking—it had beautiful colors and featured a woman’s face gazing with something between a smirk and a tender smile at the nervous face of a man across from her. Something about the interplay between them intrigued me and made me want to know—what is this story about? I clicked play and was immediately transported into a beautiful opera scene. The film goes from a close shot inside the singer’s vibrating mouth to her face to the stage to the audience. In the audience, a beautiful curvy blonde woman is completely enchanted by the scene and the music as her handsome ponytailed boyfriend sleeps on her arm. I was hooked. Ignoring everything around me I was sucked into the world of the movie and the time flew by.

Falling for Figaro is a romantic opera comedy. I’m not really a huge fan of opera but this movie made me into one. The singing in it is enchantingly good. The film stars Danielle MacDonald as Millie Cantwell an ambitious American living in London and working in finance. While Millie is touted as a success in her firm, earning accolades and rave reviews and living the good life, she is a frustrated artist. She longs to fulfill her dream of being an opera singer. She quits her financial job and embarks on a journey to a remote village in the Scottish Highlands, where she hopes to train with the very reclusive and haughty voice coach Meghan Geoffrey-Bishop played by Joanna Lumley. Antics and comedy ensue when she encounters the deprivations of village life, and the depredations of her steely eyed and imperious coach. Mrs. Geoffrey-Bishop happens to be coaching another aspiring opera star, the awkward and adorable Max played by Hugh Skinner. Both Max and Millie are competing to win a vocal competition called Singer of Renown.

Millie was a refreshingly confident and strong heroine. She takes no prisoners, is brimming with confidence in herself, and is independent and clever. She is also beautiful and curvy and owning it. She dresses elegantly and sings like a dream. She is 90 % of why I loved this movie. Mrs. Geoffrey-Bishop is a delight—moving between acerbic tormentor and wise teacher, she delivers many of the film’s funniest lines. The tensions and stakes of the movie are low-will Millie and Max turn from enemies to lovers? Will Millie win the competition? Will Millie’s boyfriend redeem himself? Please watch this movie to find out! If you want a gentle and beautiful looking film with some lovely music and light romance, well this is for you.

Previous article: REVIEW: Anatomy: A Love Story by Dana Schwartz
Next Post: REVIEW: A Song of Secrets by Jayci Lee