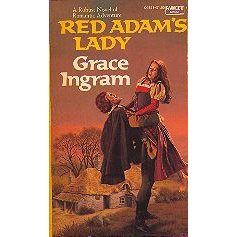 How I wish she’d written more books. I’d read posts touting Red Adam’s Lady and due to the generosity of another Avid Reader (thanks Keishon!), I got my hands on a copy of it. Depending on how readers like their realism, this one might be worth it though. It really gives a *you are there in the cesspool of a medieval hold* feeling. But it has humor and a great hero to balance that out.

Julitta starts out as a bit of a prickly pear. She’s been tossed around her whole life and not been valued by any man so it’s not surprising that she views Adam with skepticism, especially considering how they first met. It takes her a long time to warm to him but I found it more believable than if she had fallen head long in love at first sight. Watching her begin to set her new home in order gives a great view of the life and duties of a castle lady of the time. Don’t let your kitchen maids turn to slatterns, keep your rushes swept to avoid an infestation of fleas, make sure you have plenty of wood ash boiled with urine to make lye to scour the floors if you do, at all costs, keep your kitchen free of entrails and be sure your scullions don’t piss in the cook pots.

There is a slight mystery which is fairly easily solved and some of the secondary characters, especially the nobles, are a bit two dimensional but Ingram really showed the hardships of daily living in the time and the horror that can happen when things go truly wrong. I thought the she also did a good job in showing the relationships between the peasants and the nobility (pretty darn one sided).
There isn’t much sensuality here (kisses for the most part) but I had a fun time reading about Red Adam and his Lady. B+