I am going to be worthless today and it is all your fault. You see, last night I picked up your book on a whim. It was 11:30 pm when I started to read. I had a big day today with an important meeting. I figured I would read for a half an hour and go to bed. But by midnight, I had made it about 4 chapters in and I couldn’t quit. I kept telling myself that I had to go to bed but the need to keep reading and find out what happened next overrode good sense and the need for sleep. 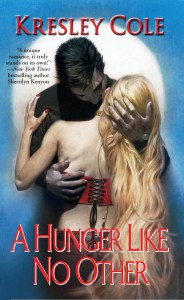 For the uninitiated, AHLNO represents your first full length paranormal. It is the second published story, however, about your Valkryie. The Valkryie in your books remind me of the males in JR Ward’s Brotherhood. Some are tormented. Some have special gifts. All are immortal. And they live together. This works much better for a group of women than men.

AHLNO has a gripping opening. A man stands in the catacombs in Paris. He has been chained to a rock in front an eternal pit of fire. Because he is immortal, he will be burned and regenerated only to be burned again. Over the centuries that he has been imprisoned, he notices the smells of Paris above him and one day, he scents HER, his mate. For each Lykae has a mate and he had searched ceasingly for her up until his capture. The triumph of finding HER imbues this creature with enough willpower to overcome his bonds but only in the most savage of ways – amputation of his leg.

The heroine, Emmaline Troy, is a young (72?) vampire/valkryie mix. She is the only one of her kind. Her mother begged the coven to take her in and raise her. In comparison to her Aunts, Em has always felt lesser because of her vampireness: her need for blood, her aversion to the sun (she has a medic alert card that describes her as having a “sun allergy and extreme photosensitivity”. I like your sense of humor which is peppered throughout the book She is in Paris searching for her beginnings: her parents and whether other mixes like her exist. It is the first time away from her Aunts. She describes her most triumphant action as going to Tulane and getting degree. She realizes, with some amount of self deprication and self pity, that this is essentially meaniningless. Through her journey with Lachlan to his enclave, she finds herself and strength in herself.

The plot is primarily focused on whether Lachlaen can convince Em that she and he are mates and the search for Em by differing factions of the Hoarde, or vampires. You have created a fascinating world called the Lore that is peopled with demons, vampires, shapeshifters, wraiths, valkryie. You have even brought something new to the werewolf mythology that I had not read before.

There are flaws in your story. Like how did Lachlan know of Louisiana if he had been in the catacombs for over 200 years. It is also possible that your readers will find Em a bit too changed but you had a decent explanation for her discovery of strength and I liked that it was within herself and not the taking of blood as I originally thought. Em’s background and training with the Valkryies seemed inconsistent at times. The sex scenes came on early and fast and didn’t seem consistent with Em’s timidity.

Overall, though, those minuses were inconsequential. I thought your book was scorching hot, extremely entertaining and left me anxious for me. I will definitely be re-reading this one and glomming your entire backlist.   B+ (It would have been an A but we readers are all tired of the whole soul mate thing)