What Janine is Reading in March of 2019

My Once and Future Duke by Caroline Linden

A friend recently recommended Linden’s An Earl Like You, but since I’m a stickler for reading series in order I decided to start with My Once and Future Duke. 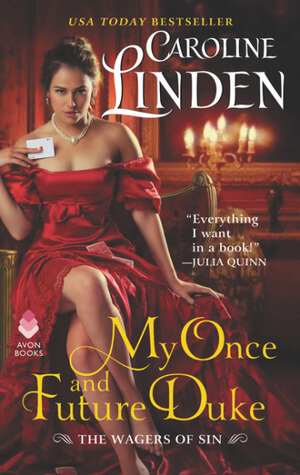 The hero, Jack, Duke of Ware, visits the club where his brother has been gambling a small fortune away in order to put to stop to this misbehavior. The club admits women and Sophie, the heroine, gambles there, earning herself a modest living and hoping to earn enough for a small dowry. Sophie tries to dissuade Jack’s brother from gambling again that night, but he insists. When she wins, Jack offers to wager an enormous sum—enough to provide Sophie with the rest of the money she needs—if she’ll wager a week of her company against it.

Of course, Sophie agrees. And of course, Jack wins. Sophie protests at being taken to his property, but he does take her there. Despite the bolt-of-lighting attraction he feels for her, he has no intention of sleeping with her. All he wants is to teach his brother, who is enamored of Sophie, a lesson.

Once they are at his house, a severe, days-long rainstorm strands them there together. They get to know each other and fall in love, but the men of Jack’s family are expected to marry for the bloodline, not love, and Sophie’s reputation is on the edge of what is proper.

I had multiple issues with the book. First, the characters’ choices weren’t that well-motivated. For example, I couldn’t believe that Sophie, keen on preserving her reputation and desperate for Jack to release her, would approach him while wearing only his robe (supposedly there was nothing else for her to wear, but still) before she knew him. That seems more like a recipe for seducing than for convincing him to let her go.

The mental lusting was clunky at times, and the dialogue occasionally sounded stilted and artificial to my ear. There were repetitive thoughts and dialogue as well. It was stated that the men in Jack’s family didn’t marry for love enough times to make a drinking game.

The prologue, in which twelve-year-old Sophie, an orphan whose father married an opera singer despite being a viscount’s son, is dumped by her grandfather at a girls’ school, was the best part of the book. That was because it had more plot and conflict than the rest of the book.

I’m not one who likes a lot of plot in romances, but this book practically sat up and begged for more. The first half felt sluggish—Sophie and Jack soon like each other so much that it’s not clear what is keeping them apart, other than a failure to tell each other what they want.

Another issue was that Jack lacked charisma. Even his brother, an immature little jerk, was more interesting. Sophie had the charisma Jack lacked, but it just made me want to see her paired with someone else.

My biggest problem, though, was that the book didn’t evoke much emotion in me, and it wasn’t particularly thought-provoking either. If a book doesn’t make me feel *or* think, then it’s lost me. This book was a bit like pudding made from a mix—fine, okay to eat, and having the basic hallmarks of dessert (or in this case, of a romance) without being special.

I will probably still read An Earl Like You since my friend liked it, but it will be a library read for me. My Once and Future Duke picked up in the final third and I liked Sophie, so it gets a C.

This book was recommended to me by someone who does not know the romance genre that well, but thought it was a romance. In my opinion it isn’t that (I would call it Women’s Fiction), but others might disagree. 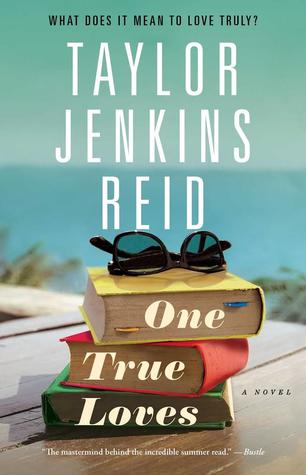 The plot concept is similar to that of LaVyrle Spencer’s Twice Loved, for anyone who has read that book, but here it plays out in a contemporary rather than a historical context.

The book begins when the heroine, Emma, engaged to be married, receives a phone call from the husband whom she believed to be dead. We then flash back to her teen years where she worked in a bookstore with a boy who grew up to be her fiancé, Sam, while secretly crushing on Jesse, the captain of the swim team.

Eventually Emma and Jesse do hook up, share their dreams for the future with each other, get married, and live happily. But not happily ever after, because Jesse, a photojournalist, disappears when his helicopter crashes.

At first Emma refuses to believe he is dead, but eventually, after grieving, she begins to heal her broken heart and build a new life for herself, a life that involves moving back to Massachusetts, where her parents and sister live, leaving her job as a travel writer to manage the family bookstore and falling in love with Sam—a music teacher who has loved her since their teen years.

When Jesse is rescued, after swimming away from the tiny island that he managed to survive on for a few years, Emma doesn’t know where her heart lies—with Jesse or with Sam.

One True Loves was very readable, but I found the first-person narration too pointed at times. Reid has a tendency to use single-sentence paragraphs to drive home her point, which is fine in moderation, but here I felt like I was being clobbered with it. Here’s an example referencing Emma’s competitive relationship with her sister, Marie:

I became a journalism major and I worked hard at improving my interviewing techniques and imagery, a per the advice of my professors.

I graduated college a writer.

That’s the part that I knew killed Marie.

I was the writer of the family while she was in Acton, running the bookstore.

Or, when reflecting on her wedding day:

As for the actual day, the truth is I don’t remember it.

I remember my mother pulling the dress up around me.

I remember pulling the train of it high enough as I walked to avoid getting the edges dirty.

I remember the flowers smelling more pungent than they had in the store.

I remember looking at Jesse as I walked down the open aisle—looking at the black sheen on his tux, the perfect wave of his hair—and having a sense of overwhelming peace.

Preferences in voice differ from reader to reader, but this author’s voice didn’t work that well for me. At times I felt Reid was trying too hard to get me in the feels. Sometimes she succeeded in that, other times she didn’t, but I was too conscious of the authorial hand at work to get fully immersed in the reading experience.

Although the book kept me guessing, for the most part, as to who the heroine would end up with, more time was spent on one of the relationships than on the other, and I was more interested in the guy who didn’t get as much attention. I wanted to know a lot more about him. While I liked him, he remained, to a certain extent, an unknown quantity even at the end of the book.

The book was a C+ for me but I’m not generally a fan of Women’s Fiction, so readers who like that genre more might very well like the book better than I did.

The Story of Us by Molly O’Keefe

Samantha Riggins runs a women’s shelter and lives on the premises. When a pregnant teenager from an obviously moneyed family shows up seeking refuge, giving Jane Doe as her name, Sam contacts J.D. Kronos. A private investigator and Sam’s on-again, off-again lover, J.D. can help her find out more. 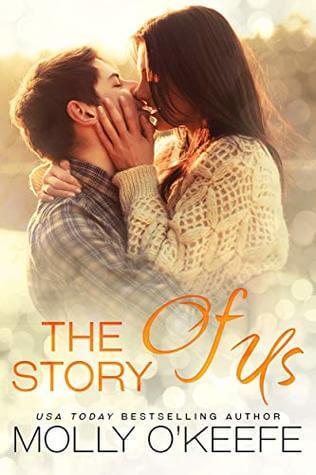 But Sam and J.D.’s relationship hits a roadblock when he hints at his dark past and amoral deeds. Sam is uncertain whether he has Jane’s best interests at heart, or if he would sell her out for money. And then another woman arrives at the shelter.

The new arrival’s name is Jennifer, and she is not seeking help, but rather to introduce her nine-year-old son, Spence, to Sam. A decade earlier, Sam got pregnant with J.D.’s child, and chose to give the baby up for adoption without ever informing J.D. that he had fathered a child. Now Doug, Spence’s dad, has died of terminal illness, and before his death, he made Jennifer and Spence promise to seek Samantha out.

Sam is shocked to meet Spence, but after a few moments of awkwardness, she realizes what a gift it is to have the chance to become acquainted, even a little, with the child she gave up. But J.D. is angry to learn that Sam never told him she was having his baby, and Jennifer, lost in the fog of grief for Doug, feels insecure around Sam, afraid, on some level, of losing Spence.

When Jennifer accepts an offer to conduct an interview with the former First Lady, Spence begs to stay with Sam for those few days. Jennifer allows it and leaves. That’s when J.D. learns that Jane Doe is Christina Conti, a dangerous mobster’s daughter.

While I liked this book, I had some caveats about it. We get a lot of insight into J.D.’s backstory and family history, but there is less about Sam’s. I wanted to know more about where she came from and what her own childhood had been like.

Further, it’s not entirely clear why Sam chose adoption over abortion, or why she didn’t tell J.D. about Spence at any point. Essentially, she stole his legal rights to his child, and this aspect is never dealt with head on. J.D. gets angry over not having been told about Spence, but not at losing him. And Jennifer never thinks about how her and Doug’s adoption of Spence could perhaps be contested, since J.D. never signed the adoption papers.

To clarify, it makes sense that J.D. wouldn’t feel angry about that aspect of it, since he thinks of himself as terrible husband and father material, and so Jennifer is never given anything to worry about on that score. But it still frustrated me, because I wanted Sam to fully face up to the wrong she had committed.

I was also annoyed with Sam and J.D. for not calling Jennifer immediately once they learned who Jane/Christina was. The possibility of her mob boss father coming to look for Christina was real, no matter how small, and it posed a danger to Spence and everyone else at the shelter. Sam and J.D. should have called Jennifer to take Spence to safety, though of course, if they had, there would be no conflict in the book’s second half.

Mostly, though, I really liked this book. The secret baby trope has been done a lot in romance, but this was an interesting take on it, and I liked Sam and J.D. both separately and as a couple. The layers of their emotions were peeled back gradually, and having Spence in the mix brought out their vulnerabilities and soft sides even when they wanted to stay angry at one another.

Spence was a great character and I also liked Jennifer, Christina, and Deb, a co-worker of Sam’s. The tight focus on the shelter as the setting made a section that took place outside it, when the characters go to the river for a swim, all the more effective.

The Story of Us was very readable and emotional—sexy, tender and moving. I cried when J.D. told Sam about his past, and was touched by a decision Jennifer made near the end. B-.