REVIEW: Thrill Me to Death by Roxanne St. Claire

So I am on my way to a small town for a business trip and I have a Pocket PC full of books to read. This one made my four hour trip seem like 1 hour. And I gleefully reminded myself that I only paid $3.89 at SimonSays.com. 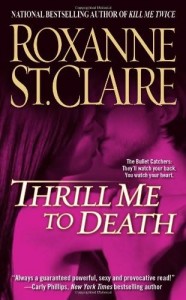 Thrill Me to Death is an action packed book that reunites two old lovers. Cori Paker nee Cooper is the widowed wife of billionaire mall developer William Parker. Theirs was a May to December romance that lasted five years. William died of a heart attack in his bed but Beckwith International, the insurance company, questions whether this is really a homicide. Cori is concerned for her safety and contacts Beckwith who refers her to Bullet Catchers. Now, it bothered me a lot that BC was hired both by the insurance company and by Cori. It was a huge confict AND BC took on the case with no real loyalty to Cori.

Lucy, the enigmatic head of BC, taps Max Roper to be the muscle. She does so intentionally because Max and Cori have a past. They were lovers 6 years ago and their relationship ended suddenly with the death of Cori’s father. Cori blamed Max for her father’s death. Max left and by the time that Max came back, Cori was married to William. Lucy is relying on Max to use his past relationship with Cori to ferret out information as to whether Cori killed William.

The reason for why Cori left Max in the first place made absolute no sense. Cori’s explanation was dumb and showed a shocking lack of maturity and communication. She also acted TSTL in at least one major situation. For some reason, however, I was able to look past the explanation (it came toward the end of the story) and the TSTL event and enjoyed this book. I think I just liked Max. and that Cori actually loved William. The plot moved by swiftly. Max and Cori’s chemistry was palpable. Again, I found that despite the lack of graphic words, the love scenes were raw and passionate.

You did a good job of keeping the suspense, the action, and the romance balanced. There was just the right insertion of other characters to make me excited for the next book but not detract from Max and Cori’s story. The ending maybe was a little too HEA but I can see what the point of it was closure.

This isn’t a book that I will want to read again, but I am looking forward to the next BC novel. B- for this one. (I liked Max better than Alex so would rank this book above the other).

→ Jane
Previous article: REVIEW: Dangerous Cravings by Evangeline Anderson
Next Post: REVIEW: The Spinster and the Rake by Anne Stuart