Your young adult fantasy novel, The Thief, was named a 1997 Newbery Honor Book, an ALA Notable Book, and an ALA Best Book for Young Adults. After hearing good things about the series that begins with this book from two different friends, I was eager to begin reading it. 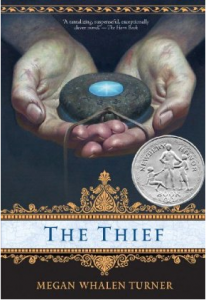 Gen, the hero of the story, is languishing in the King of Sounis's prison when the Magus, who is the king's advisor and scholar, comes to see him. The Magus explains that he needs Gen (a thief who managed to swipe the King's seal) to steal something for him, but he won't reveal what. Gen will be released into the Magus's custody if he agrees to this theft. If he tries to escape before stealing the object and turning it over to the Magus, the King of Sounis will offer a huge reward for Gen's capture.

So it comes about that Gen agrees, and the next day, he begins a journey to an unknown destination in the company of the Magus, a soldier named Pol, and two young men that Gen dubs Useless the Elder and Useless the Younger. Gen must make the journey on horseback, and he is not very good on horses. He is also weak and hungry because of the time he spent in prison. Therefore he is not always on his best behavior as the group travels, and tensions begin to develop in the group.

Since Gen bragged about stealing the king's seal, the Magus thinks Gen is a good thief but a stupid one. He plans to use Gen as he might a tool, like a hammer, but he doesn't accord him anymore respect than he would a hammer. Gen, who had reasons for bragging about his thieving that he doesn't want to reveal, is chafed by the Magus' attitude.

Then there is Useless the Elder, whose real name is Ambiades. He is the kind of person who looks down at anyone from a lower station, and sees most people as being below himself. To say that Ambiades is difficult to get along with is an understatement, and Gen doesn't even bother trying.

On the other hand, Gen comes to like Pol and Useless the Younger, whose real name is Sophos. Pol is very capable and Sophos friendly to Gen.

During their travels, the group passes from the Kingdom of Sounis to that of Eddis. Gen's mother was from Eddis, and he is familiar with its religion, in which a different, older set of gods is worshipped than the ones prayed to in Sounis and Attolia. To make the journey more enjoyable and to educate Ambiades and Sophos, the Magus begins to tell Eddis's creation myth to the other men. Gen knows different variations of these stories from his mother, and eventually, he too begins to tell the others stories about the old gods.

Some of the dynamics between Gen and his companions begin to change as the journey progresses. Gen also learns that the object he will be stealing is something that could shift the balance of power between the three kingdoms of Sounis, Eddis, and Attolia. When, about halfway through, the travelers reach their destination, the place turns out to be more mysterious and magical than Gen imagined.

Will Gen succeed in stealing something where countless others have failed? And what will happen to him and his companions after this attempt? What will happen to the balance of power between Sounis, Eddis, and Attolia? Those things are left to the reader to discover, and in the process, we also learn that not everything is what it appears to be.

It took me a while to get involved in the story because although Gen's narration was very well written, his character was not instantly sympathetic to me. In the beginning of the book he is portrayed as a rather selfish person who cares mostly about his own comfort and about becoming famous through an extraordinary theft. This does change as the book continues, and I gradually grew to like him better.

The first half of the book seemed somewhat slow to me. The tension between Gen and his companions begins with mild annoyances, and I felt a bit impatient while waiting for something of greater significance to happen. The myths of the old gods held my interest, and I thought that you did a terrific job of making them unique, and giving them the flavor of mythology at the same time.

The second half of the book held more excitement, and I especially liked what happened when Gen and his traveling companions reached the place where the object he came to steal was located. There were some twists that were revealed at the end of the book, and even though I had guessed one of them all along, there were others that surprised me.

The setting of The Thief is based on Greece, and it was refreshing to read a fantasy with a Mediterranean flavor. I enjoyed the little details such as the characters eating olives and cheese for lunch and yogurt for breakfast, but one little detail that threw me was the mention of guns. Although they were said to be less accurate than crossbows, I still had to revise my mental picture of the society of this world. Because everyone traveled on horseback and there were no other inventions as advanced that were mentioned, I had not anticipated that guns would exist in Sounis, Eddis or Attolia.

While I can’t rave about The Thief, I enjoyed it enough to look for the next book in the series, especially in light of a spoiler I’ve know about and in light of how passionately some readers love that book.

As for this book, although I think it may be a better read for young adults than for grownups like me, it’s still good enough to get a a B- from me.