You hardly need my review, as you seem to be a fairly well-known and well-selling author—in scifi/fantasy. Certainly, I had never heard of you until I stumbled across your book at my library, which sports a lovely, romance-novel-type cover. 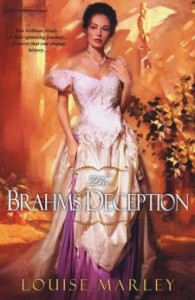 That’s right. This is a case study in covers telling the reader what genre it is and successfully suckering a long-time romance reader jaded to all the subgenres. Because the cover had all the cues, I assumed certain things from the blurb.

Music scholar Frederica Bannister is thrilled when she beats her bitter rival, Kristian North, for the chance to be transferred back to 1861 Tuscany to observe firsthand the brilliant Johannes Brahms. Frederica will not only get to see Brahms in his prime; she’ll also try to solve a mystery that has baffled music experts for years.

But once in Tuscany, Frederica’s grip on reality quickly unravels. She instantly falls under Brahms’ spell—and finds herself envious of his secret paramour, the beautiful, celebrated concert pianist Clara Schumann. In a single move, Frederica makes a bold and shocking decision that changes everything…

When Frederica fails to return home, it is Kristian North who is sent back in time to Tuscany to find her. There, Kristian discovers that Frederica indeed holds the key to unraveling Brahms’ greatest secret. But now, Frederica has a dark secret of her own-one that puts everyone around her in devastating peril…

I’m a little embarrassed to admit the extent to which I was suckered. I was about halfway through the book when I realized this was not a romance. I didn’t know what it was, but I liked it.

I looked you up later to find out you are a scifi/fantasy author, which then made everything click. What can I say? I’m slow. Especially when the cover and blurb scream historical romance.

Clearly, this is a time-travel novel, which I don’t normally care for, but the premise of observing the past instead of interacting with the past was palatable for me. It also features artists of some kind, and I love artist stories.

It begins with the unlikely (at least, to a romance reader) scenario where the first character mentioned in the blurb and the book proper is actually not the protagonist. There are three points of view, all told in third person.

Frederica was a homely girl who has grown into a homely woman. She is also rich, spoiled, and ambitious—none of which is shown until about halfway through the book, which makes what she actually does in 1861 rather jolting to the reader. At the risk of spoilage, I will only say that she invades Clara Schumann’s personal space in rather more than a personal way. At first, the reader is sympathetic with Frederica, knowing her lifelong struggle with her ugliness, but as Frederica’s ambition ramps up, one loses any sympathy at all.

The real protagonist in this novel is Kristian North, whose name I read all the way through as “Kristin.” Really, “Kristian”? Now, while writing this review, I realize that at times, he read like a woman. He was too quick to take blame for his (justified) anger and apologize for it, which I don’t feel a man would have done after having been cheated of a position he’d earned by an indulgent (and very rich) father of a spoiled, ambitious woman. Money talks.

He is a sympathetic character, though, and his unprivileged ambition pays off in the end. There is a hint of romance with a secondary character, which was very sweet.

The main conceit of the book can be boiled down to this: Frederica had had a lifelong fascination with Brahms and, lacking any social life at all outside her immediate family, had a crush on him the way any other girl would have a crush on a rock star. By happenstance, Kristian was in the same position of having a crush on Clara Schumann. My only beef with this was that Kristian never seemed to understand that he and Frederica shared this personality trait.

The characterization of Clara Schumann was done very well and, though I don’t know how true to life it was, how 19th-century characters might have acted with somewhat more formal decorum, even when conducting a very secret affair, even in bed.

I can’t say much more about the relationship between Clara and Brahms during this time period because of spoilerage, except to say that the premise of historical research using observation time travel (where the travelers are essentially ghosts and cannot interact with the past) had not been tested thoroughly enough for the powers that be to know that the past could be changed via a specific (and despicable) mechanism.

I had other minor quibbles with the book, such as the ending feeling simultaneously rushed and too drawn-out. There was one particular act Frederica committed that was never explained how she did it.

The descriptions of scenes, landscapes, and ambiance were well done. Historical facts about Brahms and Clara were narrated from Clara’s point of view as if in flashback, so it didn’t feel like infodump. The explanation of the mechanism of time-travel made sense to me and it seemed you covered all the logical bases. Likewise, descriptions of the side effects of Kristian’s time-traveling made me about as dizzy as they made him, which is a definite win.

There was one line that made me laugh. Frederica, who despises children (and who is jealous of Clara’s relationship with Brahms), wonders about the nature of Clara’s lovemaking:

And she didn’t know if Clara—who had years of experience and a revolting flock of babies to show for it—was bold or shy. Modest or demonstrative.

I was mildly annoyed that I got suckered by the cover, which led me to assume things about the blurb. There was a bit of heavy-handed points made about morality (time-travel and illicit sex, to be specific). But I read the book in one sitting, so in spite of its flaws (and mine), it kept my attention. B-/C+.