This book started out so well. The dialogue was sly and fun. There was an air of mystery introduced by the vague prologue and background of the heroine. But the book kept meandering along with NOTHING happening and the ending left me unsatisfied, as if I had only read half the story. 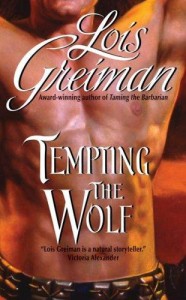 Sir Nairn O’Banyon made a mistake early on in life. As a lover of women, he allowed himself to be seduced and enchanted by a golden goddess. Said golden goddess wanted him to kill his friend, Killian of Hiltsglen. O’Banyon refuses and is cursed by the golden goddess to turn into a wolf or “Irish Hound” when his passions overtake him.

Much of the story is told in a veiled fashion where you hint at the truth without ever fully revealing it. I am not even sure what the plot is. I think it’s that O’ Banyon falls for the Countess of Colline, a woman with a mysterious past. It is said that Antoinette Desbonnet is a witch whose touch adversely affects everyone around her. Antoinette herself believes that if she should touch someone with her hands, she would bring them harm. Thus, the plot is for O’ Banyon to convince Antoinette that only she can tame his savage beast.

The witty dialogue is superb but I couldn’t help but notice that much of all that happens in the book is dialogue. In fact, I was reading merrily along when I looked at the page number and thought, “holy crap, I am in the middle of the story and there’s nothing happening here.” There simply wasn’t enough balance between banter and action.

The uncertain nature of the paranormal aspects made for a confusing read. I wasn’t quite sure what was magic and what was not in this story. I wasn’t sure what happened with the curse of the Irish Hound. Several reviews that I read mention that the hero turns into a hound and I believe that to be true, but it wasn’t clear how the hound’s nature was triggered, what would break the “curse”, what would happen once the curse was broken. The world building was a bit weak and, at the end, it seemed inconsistent. I could have used one extra chapter to kind of lay out the facts for me. It’s completely possible that other readers didn’t have this problem but I like to be certain of my conclusions unless a more nebulous ending is important to the tale. I don’t know if I had read the first book in the series whether this one would have made more sense.

Let me paint you a picture about how this book left me. When I stood in front of your book, Taming the Guardian, at Waldens contemplating books to purchase given the 10% off sale, I decided against purchasing it because I just don’t like being confused at the end of my stories. B- given the great dialogue but muddy plot.

P.S. Your website is kind of confusing (like the book). I googled you and came up with http://home.earthlink.net/~lgreiman/. This is an old site of yours, I guess. Your real site doesn’t show up until the 6th search result. You may want to SEO your website and take down the other one. Just a suggestion. But at your “real” website, you have no excerpts of your books!! Please include excerpts. Readers like excerpts. ALOT. Plus, there isn’t anything new on the website and it hasn’t been updated since like June????