I haven’t stopped reading gay fiction, but I find myself reading fewer and fewer m/m stories these days, especially compared to the amount I used to read. I’m continuing with the Brandstetter series, as well as with Michael Nava’s Henry Rios mysteries, and I’ve picked up recent and not-so-recent mainstream and literary novels with romance subplots. But the direction that so much of m/m romance has taken lately isn’t working for me. I’ll keep reading my favorite authors, though, and I’d love to have recommendations for more of the same. 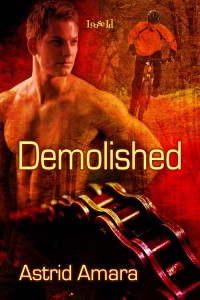 I’m a fan of Amara’s other books (especially her contribution to the Irregulars anthology and Carol of the Bellskis) so I picked up this contemporary. The characters are as likeable and amusing as ever. The book features two characters who are in college, so it might be considered NA; it’s not about their coming of age, per se, but it is somewhat about them finding themselves and figuring out the future. Calvin and Felix are out, gay men in their early 20s, living in Bellingham, Washington. They meet on a Grindr-like sex/hookup website, but when they make a face-to-face appointment they discover they knew each other in high school, and Calvin has hated Felix since their senior year.  So much for the fantasy hookup, but fairly quickly Felix is able to show Calvin that he was operating under mistaken assumptions, and they begin a tentative relationship. At the same time, Calvin is finishing college and trying to figure out what is going on with his nephew, Robby, who is also gay and has changed from a happy-go-lucky high school student to someone with a secret that’s making him unhappy and volatile. This sets up a mystery that propels the plot and involves Calvin, Felix, and various other family and friends. I really liked the relationships and the voice, but the romance took a back seat to the mystery, the mystery wasn’t all that mysterious, and the villain was a stereotype. Most problematically for me, though, the story felt as if it was as much a cautionary tale as a contemporary romance, so the whole thing never came together for me. Grade: B-/C+

See the Light by Cassandra Carr 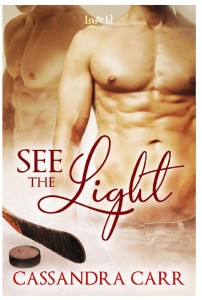 I picked this up because I’m always looking for sports romances and I like hockey. But what a disappointment it turned out to be. Nominally, the story is about Jason, a young NHL hockey star, and Patrick, a retired player turned coach, who are brought together on the US hockey team as it prepares for the upcoming Winter Olympics. Unfortunately, there is almost no time in the book that is spent on the game or on hockey relationships. Jason and Patrick lust after each other like obsessed teenagers, meet clandestinely to have sex, and masturbate a lot. There is also an obsession with topping/bottoming and whether or not the newbie gay guy will be willing to bottom. I didn’t find the sex scenes particularly sexy, which is a shame because there are a lot of sex scenes, and it’s a hockey book with very little about what makes hockey and hockey players fun to follow (except for endless discussions of their fab bodies), The storyline sets up scenes at the Winter Olympics, but when we finally get there, the hockey disappears in favor of the drama. Before that, Jason and Patrick agonize over being separated, because apparently the 90 miles tht separate Newark from Philadelphia create such a difficult commute during the season that getting together is a major hassle. There is a big reveal after the Terrible Event That Shows Us What Really Matters and then boom, no follow up, the book just ends. And while the athletes are closeted for most of the book and worried about being outed, when they do finally come out, there’s very little reaction. There’s better fanfiction out there, for free, if you want to read hockey slash.  Grade: D

By Chance by Cat Grant 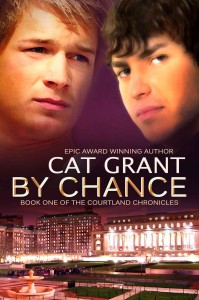 This is the first installment in Grant’s Courtland Chronicles series. It’s another college-set romance, this time featuring an outgoing jock and an introverted rich kid. The  The novella starts out strongly with a clever hook and immediately relatable characters. Grant presents a believable, accurate picture of Columbia University and college life; nothing feels “off,”and I’m a tough critic since I once knew the place very well.  The writing is smooth and the main characters feel like individuals rather than cookie-cutter products. Eric Courtland, the introverted rich kid, is refreshingly prickly and difficult to warm to, and he doesn’t completely lose that quality even when we get to know him better. Nick Thompson, the outgoing jock, conforms to some jock stereotypes and contradicts others, and their circle of friends are similarly individual.
The strong first half loses steam in the second half; there’s plenty of action and conflict but it feels less organic, more told than shown. Unlike a lot of NA or NA-type books right now, it doesn’t have the emotional wallop of traumas and crises that epitomize that period of one’s life.  Nevertheless, I enjoyed this first book enough that I’ve put the next one on my TBR. Reader warning, though: a later installment introduces a woman character, so if you like your m/m to stay m/m, you might not want to plan to read beyond this, which is chronologically the first book and has an HFN resolution. Grade: B- 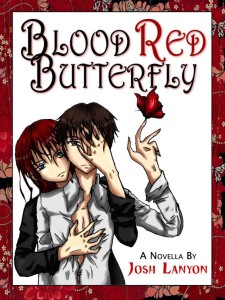 Toward the end of his sabbatical last year, Josh Lanyon released this manga-influenced detective novel. Detective Ryo Miller is investigating a homicide and unraveling the role of manga artist Kai Tashiro is essential to solving it. The mystery isn’t who did it but rather how the killer got away with it since no other credible suspects are put forward. Both the characters and the writing style are less coolly depicted than in other Lanyon mysteries, the overall mood is more emotional in the style that some manga is emotional, and the words evoke the drawings (I was frequently seeing manga panels in my head as I was reading). Both Ryo and Kai are alluring as characters, and the setting is vivid and engrossing. I want to stress that I can’t speak to the authenticity of the manga representation, because while I’ve read a number of stories I’m definitely an ignorant consumer of the medium. It felt like a particular type of manga, not just BL but one of the less complex versions. The ending is a bit ambiguous and very abrupt (even for a Lanyon novel). I’m still not entirely sure how the deception and murder took place, and if it happened the way I think it did I don’t entirely buy it. The novella doesn’t really work, in the end, but it made me think, and I enjoyed watching an autobuy author try an experiment out of his comfort zone. Grade: B-

Save the Date by Kate McMurray

Even when McMurray’s books don’t entirely work for me, I like the voice and the characters, so I picked this novella up. It’s a very simple story: Tristan needs date for ex-boyfriend Stuart’s Formal Gay Wedding and serendipitously discovers that his supposedly straight good friend Darren is not only gay but has had a crush on him for a while. They get together but of course the path of friends-to-lovers doesn’t run smoothly, friends and family react in supportive and not-so-supportive ways, but eventually they work through it, with time out for angst over past loves, weddings, permanent relationships, and football. So yes, it’s predictable in its plot and characterizations, but the writing is relaxed and smooth, the narrator is appealing, and the supporting cast is slightly clichéd but generally well depicted. And yet I ended the story frustrated, because I am convinced that McMurray has a really good, maybe even great, novel in her, and this isn’t it. It’s a slice of life, an episode in a larger, potentially more interesting story. I want the whole package. So I’ll undoubtedly keep reading this author, waiting for the book that hits it out of the park. Grade: B-/C+