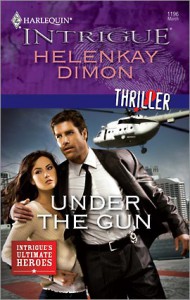 Under the Gun by HelenKay Dimon

I’ve never been a huge fan of the Intrigue line because I felt that even full length romantic suspense books struggled to fit both romance and suspense in one story, how could a compressed format do both topics justice? Under the Gun had a good balance of both the suspense (which was more of a whodunit) and the romance, in part because both were in full swing at the start of the book.

Luke Hathaway was jilted by Claire Samson, his one love, who then proceeded to marry another man a month later. Claire loved Luke, but he was always keeping something from her. At the last minute, she caved to her fears and gave Luke his ring back and decided to marry stable, wealthy Phil Samson. Only Phil decides to fake his death and pin it on Claire and now she looks for Luke to help her.

It wasn’t explained why Claire was so good at evading the law or why she thought Luke could help her other than he has a savior’s complex. I wasn’t super convinced at Luke’s easy forgiveness of Claire’s overthrowing him but it was a quick read with a decent suspense thread. B-

(eBook) |
Fictionwise | Books on Board 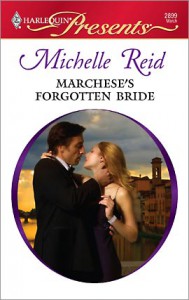 This is an amnesia story but this time it’s the hero who has amnesia. Allessandro Marchese is on hand to oversee the smooth assumption of his latest takeover. Cassie Janus is the single mother of five year old twins who nearly faints upon seeing Sandro again. She had had a romance with him and after she got pregnant, Sandro disappeared leaving Cassie alone and penniless. With her MBA, she’s managed to provide a good life for her children and she’s furious to see Sandro again. Further, she’s not sure if she really believes his crazy claims of amnesia. Sandro is manipulative and Cassie is helplessly attracted to him. For fans of the amnesia trope, this is fun to read about the hero with amnesia. All the good of an HP line is here without too much of the bad. It’s full of agnst and passion but not too much of the asshole hero and no doormat heroine (despite Cassie’s attempts to resist her own desire). B- 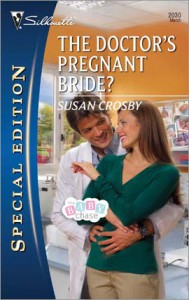 Ordinarily I stay out of this line. The doctor/nurse dynamic has never been one that interested me. Probably too many years of hospital related television dramas. Doctors never seem to have fidelity as part of their makeup.

Sara Beth O’Connell works in a fertility clinic whose research and results are under suspicion. She is asked by her best friend and boss to keep an eye on the clinic’s two main research doctors, one of whom is Ted Bonner. Ted plays the part of the absent minded professor, someone who is so focused on his job that he can barely remember to eat, let alone date. Most of the story involves Sara Beth becoming the focus of Ted’s attention, particularly while she decorates his bachelor bad at his invitation. There’s some clinic work, but the medicine is really a sideshow. I swear I read more about the two of them debating furniture pieces than about fertility science. It was rather a dull story and it didn’t inspire me to pick up others in this line. C