I would have never thought the three of you were a good match in an anthology but, for the most part, it worked. For the readers edification, however, only Hot Toy by Jennifer Crusie is a new contribution. Christmas Bonus by Lori Foster was previously published in All I Want for Christmas in 2000 and Naughty Under the Mistletoe by Carly Phillips was previously published in Naughty or Nice? in 2001. One thing I noticed about each of these anthologies is that each couple had a previous connection before the start of the story and none of the stories ended with babies. 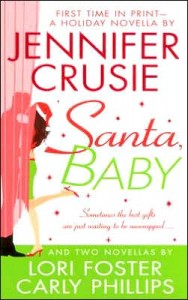 Hot Toy by Jennifer Crusie
For Crusie fans disappointed (or delighted) by Don’t Look Down, Hot Toy is much more in keeping with traditional Crusie writing. It features great dialogue, a mouthy heroine, and a fast moving plot. On Christmas Eve, Trudy Maxwell is searching for a MacGuffin, the season’s Hot Toy, for her nephew Leroy. Leroy’s father just ran off his his nanny and his mother is desperate for Trudy to find this particular toy. Only, because of its popularity, the toy isn’t in the stores anywhere. Trudy runs into Nolan Mitchell at the toy store. Nolan is a professor of Chinese literature at the local college who Trudy dated four times and then never called. Nolan really isn’t a Chinese literature professor but rather a secret agent. Frankly, who isn’t a secret agent in romance these days. The big surprise would be Nolan actually being a Chinese literature professor.

You can’t look too deeply at Nolan else you start thinking he’s a real ass. He is a real ass and there is no grovel which can be irritating. The action plot is quite farcical and the action “twist” is something out of a bad B action flick (are there bad B action flicks or is it just bad B horror flicks?). Read for the surface, the dialogue and the fast pace and it’s a reader pleaser. I would give this story a B-.

All I Want for Christmas by Lori Foster
This was the weakest contribution but had the most sex. I think the story to sex ratio was 30:70 in favor of the sex; but maybe that made up for the no sex in Hot Toy. Because All I Want for Christmas is all about sex, there isn’t much for me to write about in the review. Maggie Carmichael is a twenty two year old who just inherited her father’s Sporting Good firm. Eric Bragg thought that the presidency should have gone to him, but Maggie assumes the mantle. Maggie would rather Eric run the company so she can write her romance novel but thinks that this is her opportunity to act on her long but latent love for Eric and Eric decides that he is going to act on his long but latent desire for Maggie. Wondrously their two motivations are in sync and they fall into bed and have lots of good sex forever after. C.

Naughty Under the Mistletoe by Carly Phillips
This story was a bit of a surprise to me as I have been unimpressed by your books in the past. This was a fun, modern tale hampered by a stupid misunderstanding used to create artificial conflict but thankfully, this was an anthology contribution, it didn’t last long. Toni has the hots for her boss, but has kept her hands to herself. A promotion right before Christmas which will move her to another division allows her the opportunity to take a chance and when they meet at the office Christmas party, she takes advantage of some mistletoe and plants a hot one on her boss. Only it’s not her boss, but her boss’ twin. Embarrassed, she runs off, but the hot kiss was enough to send twin, Max, after her. It’s a cute breezy tale. B.

→ Jane
Previous article: REVIEW: Death in Berlin by MM Kaye
Next Post: REVIEW: The Scot, the Witch, and the Wardrobe by Annette Blair