Almost three years ago, I read and reviewed The Martian. While I didn’t love the book, I appreciated much about it. When I heard that you had a new book, a murder mystery set on the moon and titled Artemis, I requested an ARC so that I could review it. 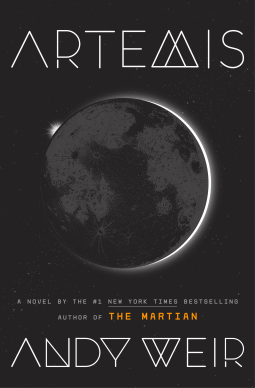 Artemis is the first and only city on the moon. It is made up of five big spheres called “bubbles,” each named after a different astronaut. Jasmine “Jazz” Bashara, protagonist and narrator, came to Artemis from Saudi Arabia when she was just six years old, and twenty years later, she considers herself Artemisian.

Jazz lives in a bunk in the grungy underground in Conrad Bubble. “If my neighborhood were wine,” Jazz says, “connoisseurs would describe it as ‘shitty, with overtones of failure and poor life decisions.’” But Jazz has big plans. As the novel opens, she is trying to pass an exam that would let her to join the EVA guild and guide tourists on the moon’s surface.

Since tourism is Artemis’s main industry, such a job that would earn her a lot more than her current position of porter. Unluckily, her EVA suit, which she bought used, springs a leak and she barely makes it back inside the airlock of Conrad bubble in time. Thus, she fails the exam.

This roadblock stresses Jazz out. She badly needs the sum of 416,922 slugs (slugs are the lunar quasi-currency; their name comes from the acronym SLG, for “soft landed grams”) for reasons that are initially unspecified, but clearly very important to her. Until she has another opportunity at the EVA exam, Jazz will have to continue working at her current job of porter/smuggler.

On the way to that job, Jazz runs into Dale, an EVA master whom she considers an enemy, and he taunts her about failing the EVA exam. At work, Jazz receives a shipment of contraband cigars from Mr. Nakoshi, the head longshoreman whom she bribes to look the other way. The cigars—contraband because the moon’s air is pure oxygen and therefore highly flammable—are for Trond Landvik, a wealthy customer whose fortune was made in Norwegian telecom.

Trond has a guest with him, a man named Jin Chu who hails from Hong Kong. Jin is holding a mysterious box on his lap. When Jazz enters the room, Jin closes the box, which makes her very curious about its contents. Later, he reaches for a coffee cup and inadvertently allows Jazz to catch a glimpse of its exterior, which bears the legend “ZAFO SAMPLE—AUTHORIZED USE ONLY.” But Jazz has no idea what Zafo is.

Jazz leaves to pick up her next “package,” a wife beater, and deliver him to Rudy, the man who comprises lunar law enforcement. Jazz has run afoul of Rudy in the past and she knows all he needs is evidence of her smuggling to deport her back to Earth.

Jazz then fights a fire (Artemis’s flammable atmosphere is a conceit which struck my engineer husband as unlikely), and afterward, has a much-needed drink at her neighborhood bar (although Muslim, she is not observant), which is when Trond uses her Gizmo (an advanced smartphone) to summon her.

It seems Trond has a job for Jazz. It is risky as well as illegal, but Trond as his reasons and Jazz needs money, so when he offers her a million slugs, she sets aside her instinct to refuse, and agrees to do it.

But not only do things go awry when she tries to execute her mission, they go worse than awry shortly afterward, when Trond is murdered and Jazz is next on the killer’s list. To survive she’ll have to work out exactly what Trond was involved in, identify and disarm the killer, as well as do something even harder for her–learn to accept help from others.

Interspersed with Jazz’s present day storyline are her emails to her Kenyan childhood pen pal, Kelvin, from the beginning of their correspondence in her childhood up through the present day. The emails are an effective device, allowing us to get to know Jazz’s backstory and see how she has wound up in the situation that she’s in when the book begins without being intrusive.

The mystery in Artemis is interesting and should perhaps be considered a thriller–it’s less a whodunit and more a whydunit. I wasn’t surprised at the killer’s identity but I was surprised at all that was going on behind the scenes.

The moon setting is really well-constructed, but the characterization feels thin, and Jazz isn’t the most sympathetic character. As many characters tell her, she squanders her potential, but the reasons why were never substantiated to my satisfaction.

It’s suggested that she’s rebelling against her father, but she’s 26, so it feels like she should be over her parental issues by now. It’s also suggested that she’s lazy, but her job as a porter can’t be that easy and living on a low wage when she wants a life of luxury doesn’t make sense either.

I was also annoyed at the way male characters mansplained her sex life and her resulting reputation to Jazz. It was a recurring theme that came close to slut shaming. Jazz’s own approach to these topics at least was unashamed, which was good. She was not always convincingly female, though, and her snarkiness wore on me a bit.

It’s hard not to compare Artemis to The Martian. One huge difference is that Artemis isn’t the same kind of feel-good story of human ingenuity and an incredible drive to survive. By the end of the book, I had come to like Jazz, but I wasn’t in her corner from the very beginning as I was with Mark in The Martian. Jazz does triumph over some unlikely odds but whereas Mark was stranded on Mars through no fault of his own and valiantly refused to give up, keeping his spirits up through a huge ordeal, Jazz brought almost everything that happens to her on herself.

The cast here is quite diverse (I’ll leave it to others to decide whether these portrayals are authentic), and the prose a bit more polished than in The Martian (there’s a little more differentiation in the characters’ dialogue). Artemisian politics are also more plausible than the ridiculous office politics at NASA in The Martian.

There are several secondary characters with the potential to be interesting if this becomes a series. My favorite might be Jazz’s dad, Ammar. He’s a great foil for his daughter, being honorable, devout and hard-working. You can see where Jazz gets her fierce “honor among thieves” outlook from.

I also liked the science interspersed into the story. It was similar to but less overwhelming than in The Martian. At the same time, it wasn’t always as compelling, since in The Martian, Mark’s life hung on his getting the science right, and this isn’t always the case here.

As with The Martian, Artemis ended on a jarring note. I can’t say much more without spoilers but I was frustrated with how something that happened during the climactic scene made Jazz seem less competent than she was purported to be, and I also felt that the conclusion of the story was a bit far-fetched.

Although I liked this book, it had its weak spots. You are an effective world-builder, though—reading this, I really felt like I was on the moon—so with that in mind, I’m giving Artemis a B-/C+.