Books that are in medieval time settings haven’t been my thing; for me the 14th century generally conjures up images of the Plague, dank, miserable castles, and men and women who are happy to remain unwashed for as long as possible. That being the case, it took me quite a while to pick up Wolf’s Cross, but I’m glad I finally managed it. 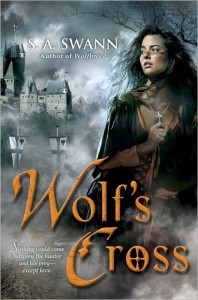 Brother Josef, a German monk still in his probationary period, is part of an Order called the WolfjÃ¤gers. The Knights are tracking and chasing what is evidently a werewolf; their order has been mandated by the Pope to exterminate the beasts. During their hunt, the knights track the werewolf to the border of Poland. There they are attacked and nearly decimated by the beast, but Josef manages to strike it near the eye with a silver tipped arrow. The order limps into a Polish border duchy, where they are greeted with plenty of suspicion and animosity.

Maria is one of the servant girls at GrÃ³d Narew, and is charged with caring for Brother Josepf. She doesn’t live within the fortress walls, and upon returning to her family’s farm the day the Teutonic Knights arrive, Maria is confronted by her father. He is apoplectic with a combination of rage and fear and accuses Maria of removing her silver cross while repeatedly yelling “What did you do?” at her. Maria’s father doesn’t survive the night, throwing Maria’s future into jeopardy and putting her at the mercy of her younger half-brother. Maria’s step-mother and brothers care for her though, and she continues to travel daily to GrÃ³d Narew, contemplating what will become of her on her trips.

On one of Maria’s return trips from GrÃ³d Narew, she encounters Darien, a handsome man with an odd scar above his eye. From this point, the pacing of the story picks up and events move along at warp speed. Maria is quickly introduced to her wolf-side by Darien and is confused and scared by what he reveals to her. Maria was raised human, totally unaware of her werewolf heritage or what, exactly, the crucifix she wears does to her. Once she learns what she is, she struggles to reconcile the woman she knows with the unimaginable creature inside of her. As her attraction to both Josef and Darien develops, her unease with both sides of her nature grows.

Maria finds her newfound power exhilarating, but she can’t reconcile her true heritage with that of her adopted one and this plays out in her relationships with Darien and Josef. It is unfortunate that her relationship with Josef deteriorates into Maria feeling guilty for being everything that Josef has been trained to fear and hate. I think that if there were something more than attraction to balance out the overwhelming feelings of guilt, the triange between her, Josef and Darien would have worked better. With Darien, it is evident from the beginning that he despises everything humans are to the point of insanity. It takes a while for Maria to catch on to this, and even when she does, that she isn’t instantly repulsed by everything Darien represents surprised me.

I mentioned that the story began to move along quite quickly after Maria is introduced to Darien. While I was happy that the pacing picked up, I would have loved to have encountered more of Maria and Josef’s developing relationship rather than Maria’s constant guilt over her true nature and her fear that Josef would discover her. Josef is a few steps above Maria on the medevil social ladder, and there isn’t a whole lot of discussion about this from Josef’s point of view. While some of the relationship aspects of the book suffered, the worldbuilding behind the wolfbreeds and the WolfjÃ¤gers was fascinating. This book was a pleasant surprise and change of pace. B-

This is a trade paperback published Bantam Spectra, a division of Random House.

→ Shuzluva
Previous article: REVIEW: All I Ever Wanted by Kristan Higgins
Next Post: REVIEW: Purge by Sarah Darer Littman