REVIEW: With No Remorse by Cindy Gerard

Sue Grimshaw, formerly of Borders and now acquisitions editor for the newly relaunched Bantam Loveswept line has always been after me to read you.  When the ARC of No Remorse hit my doorstep, I decided it was time to stop dithering and give you a try.  I’m glad I did.  This series has all the elements of standard romantic suspense fare and I mean that in the best way.  If readers like the connected series books featuring former military heroes, then they’ll like this series. 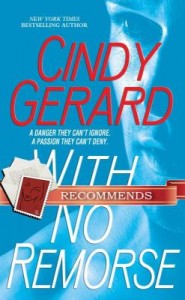 After reading No Remorse, I began to buy all the backlist titles to the BOIs. or Black Ops Inc.  I haven’t finished them all as I began to feel burnout (reading 4 books in the same series over the course of three days will do that to a reader) and I’m not sure where No Remorse falls.  I liked Risk No Secrets the best of the four I have read because I liked the complicated love story.  No Remorse offers a pretty straightforward love story: one of the last of the single operators gets caught in Cuzco trying to save a famous supermodel in hiding.

I think you can read No Remorse without having read the first four books but having gone back and read three of them, it has filled in a number of details (like the reason for the ridiculous name of the company that Luke works for – BOIs).  Luke does a lot of referencing former characters and their now happy home lives and how the changing face of the lifestyles of his friends and co workers is affecting him.  Luke is feeling dissatisfied with his life, wondering whether he really is the

Valentina is a Heidi Klum-ish character.  Discovered at a young age by a modeling agency, she parlayed that into nearly 20 years of celebrity success and a marriage to a golden California senator that ended badly. Attempting to get out of the public eye, Valentina is trying to enjoy a low key vacation (much like Luke) in South America. But someone is hunting for Valentina and it looks like Luke is her only way to safety. Like Breaking Point, much of the story is a sort of road romance as Valentina and Luke make their way through Peru.

I liked that the story took place not in the US because so much of what goes on would be implausible in the US (and possibly implausible in Peru but given my unfamiliarity with the country, it’s easier to by into the realism of the story). I also liked that this paramilitary organization was headquartered in South America.

Valentina was scared and mad and lashed out and that Luke, despite his teenage (and adult) crush on her, got upset and frustrated and lashed back. But was it just a little creepy how much Luke seemed to know about her? LIke he read all the tabloid/People/TMZ articles he could? Yes, a little.  And while I believed that Luke was a military person, I had a hard time buying into Valentina as a super model celebrity.

The story had good range with action, humor and agnst:

He pushed himself up on his elbows, suddenly full of concern. “What? What’s wrong?”

Her eyes were pinched shut, her face contorted in pain. “Po . . . potato.”

He scowled in confusion. “What? Is that some sort of safe word?”

Her laugh was part pain, part frustration. “No. The potato. It rolled under my back.”

The bad guys kept coming like the hydra, no matter how many you shoot, there is always something to replace them. (Why is there no limit to bad guys? It’s like someone churns them out by the dozen).

I know that there was an attempt at solid character development but it was never fully fleshed out. In amongst the action scenes, there just wasn’t enough space given over to making Luke and Valentina change over the course of the book. Valentina recognizes that she had lost control over her life yet she never really gained it back. She was largely dependent on the BOIs and Luke. Luke didn’t believe he was a hero anymore and yes, he got to save someone and that made him feel good but it never examined what it was about heroism that he identified with and could he live with himself if that wasn’t an option (like an athlete having to retire)

But obviously making me care about the BOIs group, both the men and the women, was done well enough that I glommed onto the backlist. I like romantic suspense and adventure stories and this one kept me turning the pages all night long. B-