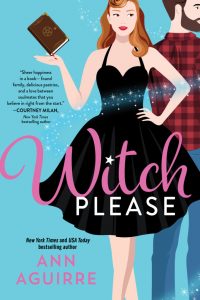 When I saw the cover of Witch Please I had to request it – it put me in mind of “Bewitched” which I remember from my childhood when it was constantly on repeat in the evenings on TV. In some respects, there are some similarities in fact – there’s definitely an Endora character.

Danica Waterhouse is a witch living in plain sight in the fictional small midwestern town of St. Claire. She and her cousin, Clementine, (they’re as close as sisters) run “Fix-It Witches” an appliance repair shop together. Customers thinks it’s kitsch and fun; they do not know that both she and Clem actually do use their magic to do the repairs they charge for.

Danica falls for a “mundane”, Titus Winnaker, the owner and baker at Sugar Daddy’s the local bakery. He’s handsome and a little shy and has terrible luck with women – he believes it’s a curse in fact.

When one of Titus’s ovens breaks, he goes to Fix-It Witches for help. Danica’s magical reaction to Titus is so extreme, the blender she is testing unexpectedly turns on and chunks of pineapple go everywhere.

Sorry that I—”
She cut in, “I know it’s a Midwestern tradition to apologize repeatedly when nobody is really at fault, but let’s call it even.”Her eyes twinkled at him, and Titus found himself responding, charmed by her warm smile and her candor. “Thank goodness you stopped me. I was prepared to apologize six more times. I might have resorted to inventing offenses.”“Such as being responsible for my smoothie malfunction?” she suggested.“That’s probably my fault. I startle small appliances all the time. It’s likely because I’m so tall and blenders are easily intimidated.”Most people found his sense of humor a bit odd, but she laughed, making his day 50 percent better, and then she joked back in the same silly vein. “Don’t worry, all of ours have been inoculated against tallness.”Titus immediately wanted to marry her. Or maybe find out her name and buy her dinner. Either way. Maybe all of the above, in a more sensible order.

Danica and Clem have made a pact to stay single. They are in the middle of a longstanding feud between their grandmother and their mothers (who are sisters) who both married mundane men. Clem’s father was her mother’s first husband – a witch – and it ended badly. Danica’s father is a mundane. Both sisters ended up happily with mundane men and Danica’s grandmother is Not. Over. It. She’s all about bloodlines and breeding strong witches. Danica and Clem have grown up with the story, emphasised every chance she gets by their grandmother, that marrying a mundane means you lose your magic and the only way to keep it is to marry another witch. She’s been constantly sending Danica links to various “Bindr” (heh) profiles and Danica is trying hard to ignore them.  Danica and Clem were trained in witchcraft by their grandmother, who has a similar magical strength (technomancy) and are very close with her but they both hate being in the middle of the family feud and feeling like they are going to disappoint someone no matter what they do.

When Danica meets Titus, she is not only doing all the things she swore she’d never do as regards the tension between her mother and grandmother, but she’s also breaking her pact with Clem. She promises herself she will stop. What harm can a little light flirting do, right?

Titus is dealing with his own family problems. His mother died a little while ago and he and his sister, Maya, run the bakery together. Their father remarried a much younger woman only six months after their mother died and dear old dad (who has since moved to Arizona with his new wife and her two children) has just announced they’re expecting a baby. It’s a lot. Maya is distraught and Titus wants to fix it but cannot.

Titus is head over heels for Danica from the first moment but he’s trying to keep his cool. His previous girlfriends and boyfriends (he’s bi) have often broken things off with him in some pretty bizarre circumstances. He doesn’t want to push Danica away by appearing desperate.

Danica is drawn to Titus. He’s a kind and gentle man, funny, generous and hot and she feels like she comes alive around him. But she can’t have him because he’s a mundane and she will never give up her magic. It means too much to her. She’s particularly close to the members of her coven (disguised as a “book club”) and she values them as much as any family member. She does not want to lose them or their connection.

In this world, if Titus were to find out that Danica is a witch, the “Council” would arrange some very severe consequences which would not work out well for him so that’s not an option either. How can she hide who she is and keep Titus? How can she give up her magic for him? How could she ever be happy doing that? With increasing pressure from her grandmother who is furious about Titus and threatening her own damage, Danica feels more and more out of control and her magic is arcing wildly.

Then a witch hunter arrives in town.

It all sounds right up my alley but unfortunately something didn’t quite gel for me. There was plenty to like but other things which didn’t work so well. There were a number of tonal shifts in the book which jarred – one example was the first time Danica and Titus had sex. It felt to me like that scene belonged in a different book. For that scene, things went from sweetly charming and gentle to steamy hot in about 1.2 seconds and it kind of gave me whiplash. I felt similarly about most of the other scenes where there was more than making out actually.

There were a lot of short, choppy sentences and some disconnected ideas in the same paragraphs which also jarred from time to time.

There was a reference to mental illness I didn’t love.

I found it an easy book to put down and walk away from and I was not expecting that at all.  Perhaps some of that can be put down to a reading mood which just didn’t fit with this book.

I liked Danica and I liked Titus but there was so much going on in the book, so many disparate ideas and story threads that most of them didn’t get the attention they deserved. One of the subplots, it’s clear will be resolved in Clem’s story, others were resolved surprisingly quickly and when I thought about why that was the tension of the conflict didn’t hold.

There were parts of the book that worked extremely well for me however. I especially liked the found family of the coven and the diversity of the town and the cast. I liked the queer representation. I liked the connection and chemistry that Titus and Danica had. I loved how gone Titus was for Danica.

Belatedly, she realized he was staring at her, like full-on gaping.“Are you all right?” she asked instead of a more conventional greeting.“I…think so?”“You don’t sound sure.”“It’s because I never realized beauty could be a blunt object before.”

One other note – when a character takes a flight there’s a reference to the “airlines [being]still desperate for travelers” which seemed to be an oblique reference to the Covid pandemic. If so, that was the only one. I wasn’t sure the purpose of that line to be honest. Either ignore the pandemic or include it in the worldbuilding fully. Maybe it was not about Covid – but if so, I didn’t understand what made the airlines desperate. I guess it’s a thing that authors are dealing with – how to incorporate Covid or whether to do so. I suspect there will be wildly differing views on the topic.

I was tossing up between a C+ and  B- for the grade. I think at least a bit of my reaction to the book was just bad timing so I’m going with a B-.

→ Kaetrin
Previous article: REVIEW: Into the Forest: A Holocaust Story of Survival, Triumph, and Love by Rebecca Frankel
Next Post: REVIEW: Pugtato Babysits the Snouts by Zondervan, illustrations by Sophie Corrigan