I consider myself a fan of your YA fantasy even though not all of your books have worked for me. I really liked Graceling, the first book in the Graceling Realm series, did not much care for Fire but loved Bitterblue, and Jane Unlimited, a book separate from this series and a kind of “choose your own adventure” story, was a dissatisfying mindfuck as far as I’m concerned. At their best, your books are stellar and you are such an insightful author. And all these books, even the ones I didn’t love, are far above most YA novels in their intelligence so despite their uneven track record with me, I wait for each new book with bated breath. 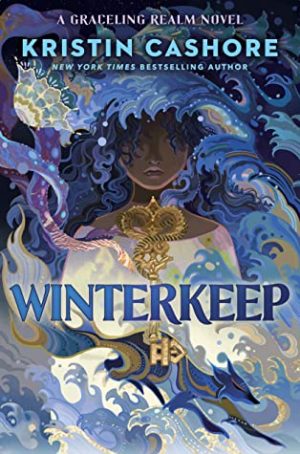 The story in Winterkeep is set outside the five kingdoms of the earlier books in the series. Instead it takes place in another country, Winterkeep, which is separated from Monsea by the ocean. Winterkeep centers on a few characters. A couple are new to readers in the series: sixteen-year-old Lovisa and Adventure (Ad for short), a sentient fox who spies on Lovisa and on others for her mother. Bitterblue, Monsea’s queen, whom readers of the earlier books are familiar with, is the third main character. Giddon, a courtier who is hopelessly in (secret) love with Bitterblue is an important supporting character and his POV is also included.

Early in the book, Bitterblue falls off the Monsean ship bound for Winterkeep. Bitterblue and her delegation, which includes Giddon and Bitterblue’s half-sister and spy, Hava, are on their way their way to Monsea on a diplomatic mission but also to investigate the disappearance of two of their countrymen. Lately Bitterblue’s lover, Katu, a native of Winterkeep and Lovisa’s uncle, has disappeared as well, though purportedly on a trip.

After falling off the ship Bitterblue is presumed to have drowned. Giddon and Hava are devastated when they arrive in Winterkeep, but Bitterblue has in fact survived and is being held captive.

Meanwhile, there’s Lovisa. She is the sixteen-year-old daughter of Ferla, Monsea’s president (it’s a ceremonial position for the most part) and Benni, an elected representative of Parliament. Lovisa is abused by Ferla and Benni is her refuge. Lovisa is always trying to watch out for Ad, the small blue sentient fox who is Ferla’s spy, so as to stay ahead of Ferla.

Lovisa is deceptive and sneaky, but as we read on, we discover she has to be in order to protect herself and her younger brothers from Ferla’s abuse. Winterkeep is primarily the story of Lovisa’s coming of age and of how she learns to contend with her parents.

Ferla and Benni are also the ones holding Bitterblue imprisoned, isolated, and hungry. They hope she’ll become malleable and willing to cooperate with their political schemes so that they can further their ambitions. Ad, who lives in their house, sees all this unfold. He admires Bitterblue’s spirit—her refusal to break—and decides to aid her as much as he can.

Ad has to find a way to do that without communicating with her, though. That Ad can communicate telepathically with anyone, not just Ferla (the human he’s bonded to), is a closely guarded secret. He and the rest of Winterkeep’s blue foxes can’t let humans discover it because they fear persecution. Ad is faced with a dilemma: just how much can he help Bitterblue while keeping himself and his siblings safe?

Although Ferla and Benni keep Bitterblue locked up in their house, Lovisa doesn’t know that she’s there. She becomes aware that something is being hidden in a locked room, though, and she wants to know what. Lovisa wants to get into the room but worries that Ad or Ferla’s guards will catch her if she makes attempts to break in, and knows that she must find another way.

While Lovisa despises Ad for his spying, Ad loves Lovisa. He identifies with her protectiveness of her younger brothers because he, too, has young siblings he’s protective of. Ad wants to help Bitterblue escape and is aware Lovisa can aid her, but he also knows that it will put Lovisa in danger and wants to protect her.

Meanwhile, Giddon wanders around in a haze of grief. He is heartbroken over Bitterblue’s death and wishes he had told her how he felt. For years they have been friends but from a political standpoint he doesn’t have the social stature to marry a queen. And Bitterblue, though she has taken lovers, isn’t in a hurry to settle down.

I enjoyed Winterkeep (albeit with caveats which I’ll go into soon). When I saw that some Amazon reviewers described the book as smut, I had a good laugh. The book was more explicit than the average young adult novel and certainly more than your others, but still not very by my romance reading standards.

I think part of the issue for some of the readers may have been the way the teenaged Lovisa approaches sex at first. Lovisa does not understand why others are enamored of sex is has sex mainly to try to figure out why they feel that way, so her approach to it is detached and experimental. At one point Lovisa uses sex to distract one of her mother’s guards from her attempts to break into the locked room. That is when she discovers that sex can actually be enjoyable, but this doesn’t turn into a romance.

Perhaps that experimenting attitude, in a sixteen-year-old and in addition to the adult Bitterblue’s casual approach to her love life, was an issue for some of those readers who feel that young adult novels should impart old-fashioned values to the young people reading them. I’m not of that view and I thought the frank and sex-positive handling of the topic was great. I loved how much we learned about Lovisa through her approach to sex, too.

The book is fairly diverse; most of the Keepish (that’s what the people of Winterkeep are called), including Lovisa and her family, are brown skinned and Bitterblue has light brown skin. Lovisa is also bisexual, as is Nev, a girl whose room at their boarding school dormitory neighbors Lovisa’s.

I loved the part of the book where Bitterblue was imprisoned. I loved that she did all she could to keep up her spirits, how she exercised to try to maintain her physical strength and did her best to stay sharp and glean clues. As with the eponymous earlier book, Bitterblue, I loved her strength of will. She was determined to keep her country and her people her foremost priority even at personal cost and that was heroic. And I loved seeing how much she had grown since the events the previous book.

I had mixed feelings about Lovisa’s plotline. I loved Lovisa’s growth in the first half of the book and how her views of intimacy and love evolved. I loved that she was willing to be ruthless to protect her younger brothers from her abusive mother, and I loved how she matched that ruthlessness against Ferla’s. Her struggle with her thoughts about her parents and was great as well. But I would have found it more believable had she acted differently and with sounder reasons when it came to her choices in the second half of the book. The scheming and cleverness that made her characterization so fresh and engaging faded from the narrative.

After being crafted in a way that was creative, smart, and funny, Lovisa became morose and passive, and I never felt that she fully regained the agency she’d had earlier. For reasons I won’t go into, it was only to be expected that she would become depressed. But prior to what triggered that, she was developing and growing and afterward her growth arc abruptly stopped. It was revived a little toward the end of the book but the last part of her story felt rushed and her ultimate choices felt forced and underdeveloped.

Additionally, a denouement at a point when all the characters came together was much too silly IMO and hard for me to buy. From a tonal perspective it felt out of place, and it was also too farcical from a thematic perspective. There were important and dark discoveries the characters made in this section of the book, and the humor didn’t fit with that.

Ad was my favorite of the new characters introduced in the book, which is saying a lot because I also loved the Lovisa and her (male) best friend, Mari. Still, I felt that Ad was the most interesting and complex character. I loved how his storyline progressed from hilarious to serious to desperate. His empathy for and understanding of Lovisa and the way he saw himself in her were marvelous. His relationship with his sibling foxes cracked me up and touched me at the same time. Ad was brave, selfless and bright, so I was frustrated with how his storyline was resolved.

There was a lot of unnecessary and dissatisfying handwaving there. Ad had suffered so much and been so self-sacrificing that I very badly wanted him to get a happy ending, but although the resolution he was given was presented as one, I could only see it as something that would ultimately hurt him further.

I have noticed that in a lot of fantasy novels with sentient animals—animal characters who are portrayed as every bit as smart, as caring, and as heroic as humans (Adventure certainly was)—that despite their being just as feeling and intelligent as humans, they are nevertheless treated by the authors as subordinate to the human characters in terms of how much their ultimate happiness matters. It was particularly ironic here because animal welfare was an important theme in this book.

The second half of the book suffered from pacing issues. There were more subplots than the book could do justice to and their wrap-up dragged. One of the things I love about the books in the series is how deeply they explore the characters. Their thoughts processes, emotions, and degree of self-awareness are thoroughly investigated. That can be wonderful but here the wrap-up felt like one deep dive after another, and though I normally adore character interiority, I reached a point of “less self-analysis, more decisions, please.”

In other respects, the ending felt rushed. The book dealt with messy, complex, interesting issues including technological development and armament, environmental issues, animal welfare, and political agency in a corrupt system and then, in the book’s last third, these issues were resolved with simplistic solutions.

The characterization, too, lost some deftness near the end.

With regard to Bitterblue and Giddon’s romance,

There was indeed a happy ending here, though not a ton of romance. I had been waiting for their relationship to develop since reading Bitterblue, so while I really enjoyed what we got, I also felt slightly deprived. Still, I don’t think more have fit into a book that was already overstuffed.


Despite the issues I’ve mentioned, I loved the new characters and felt that the first 60% of the book rocked and the worldbuilding was lovely and creative. I’ve missed this world and your writing voice greatly. I am also eager to read Hava’s story, Seasparrow, so Winterkeep gets a B- despite its flaws.