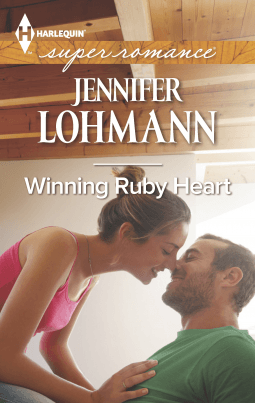 It’s a race to their beginning…
Exposing world-class athlete Ruby Heart’s cheating scandal five years ago made reporter Micah Blackwell’s career. Falling in love with her now could end it. Yet watching her determination to return to the top, he can’t resist the woman she has become.

Working with Ruby to tell America her story, Micah falls deeper under her spell. But at a crucial moment, his feelings for her conflict with his job—the very thing that once saved him. Now he must choose between his skyrocketing career and the unlikely love of a good woman….

I’d been wanting to read one of your novels for a while, ever since they started getting good reviews at DA. Yeah, it sometimes takes me awhile to make good on my best intentions but this one was meant to be. As I read your intro to the book and what inspired you to create the character of Ruby, it felt like fate since I had just that day finished watching a documentary on Lance Armstrong.

I started the book wondering just what Ruby had done to cheat and what her response to being revealed as one would be. What she did is – to me – slightly more unpleasant than taking steroids but I wondered that her coach would have talked her into receiving a transfusion of someone else’s blood rather than the usual of reinfusing her own. That’s what it seems like most of the cyclists did. Her initial response and public shaming on air reveal a woman totally out of touch with doing her own thinking and hint at the twisted parental influences that up until then had made her simply give in and do what she was told.

Now five years after her downfall from the pinnacle of public adulation to the depths of public scorn, Ruby finally is ready to take control of her life and prove – if only to herself – that she’s still got her talent and can do the thing she loves, the only thing she’s good at. It takes a sharp eyed news reporter to finally get Ruby to admit she wants more than just finishing a marathon or ultramarathon; she wants to win again. And in this, Micah Blackwell sees his way to getting what he wants most – an anchor seat and what might be the story of his career.

Due to the interview Micah did with Ruby five years ago, the two start out poles apart. Ruby can’t understand why this man who she feels publicly humiliated her thinks she’ll give him a chance to do it again but Micah is good at what he does and knows the public would salivate at the opportunity to see if Ruby has changed. Ruby’s harsh pronouncement that the public will forgive men who fall from grace while never doing so for women, especially one who used to be “America’s Darling,” finally registers with Micah when he sees the Internet vitriol that has been directed at Ruby for years.

But these two have a bit more in common than they initially think. Both are former athletic darlings who in different ways have been cut off from the sports they loved. They’re also used to people looking at something about them rather than all of them – parts instead of the entirety. They’ve struggled to move past what used to define them and make a future in their new reality. The main difference is that Micah’s made the transition while Ruby is just getting started and still has a lot to learn.

Honestly, I’m not sure about how real to life Micah’s disability is. Of course I’m trying to judge it as an abled person and I did try to read it with a critical eye. I don’t think his position there was totally to validate Ruby yet that is, to some extent, what the plot required but it would have been the same plot had he been able to walk. As much as he worked – in the capacity of his job – to get help her back into running and rehab’d in the public eye, she also worked on him – getting him to see her as a person who had learned, was repentant and finally understood the enormity of what she’d done instead of being merely a fantastic opportunity for a sports broadcasting series.

The chapter when she finally gets her agency with her parents is wonderful. So, okay it was a little “Hollywood feel good movie scripted” but damn, it was nice to see her stand tall, say her peace, not back down and almost grow 10 feet taller on the page. She also faces down Micah’s objections – on the grounds of her safety – to using her own name for race entries. She’s done with hiding and will face what her fellow racers have to say to her.

When Ruby and Micah’s personal conflict comes to a head, Ruby apologizes for still thinking of herself first even after what happens to Micah. True he had an equal amount to do with it as she did but I didn’t truly sense that they reached an understanding or had worked through this before they got back together.

I was kind of surprised at the twist at the very end. Sure the guy was a sleaze but I didn’t see the need for this “tacked on last second” conflict unless it was just to quickly finish off Micah’s redemption in the eyes of the network as the page count was running down. The end of the book and the future for Ruby and Micah, while complete, also came at a breakneck pace and suddenly, wham!, we’re done here. I even tried flipping to the next page on my ereader because it seemed too abrupt and unfinished.

My final feelings about the book are conflicted. I liked that Ruby didn’t get a do-over which wiped her initial sin clean – she screwed up and finally took responsibility for it but she found a way to forge a new life that includes running (which is shown as integral to her life) and stay within the bounds of her probation. I appreciated seeing Micah accepted as a top notch sports reporter and not as a top notch crippled news reporter. I loved Dotty the Dalmatian who the perfect dog for Ruby. But the issues which I felt weren’t completely resolved and the abrupt end lower the grade to a C+