I bought and read this book based on the recommendation of another author. I was told that it dealt with rape fantasies and I include this warning at the very beginning so that those readers who have triggers will know what they are getting into. The other thing that the recommender told me was that the book starts off with Laurel watching the hero of the story having sex with another woman. Part of me resisted this and I didn’t want to read the story because of it but when I read it, it not only made sense, but in a large part, this other woman was almost non existent in that scene so I’m glad I didn’t let my initial resistance keep me from reading the story. 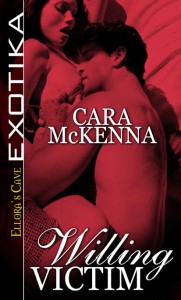 In fact, Laurel’s introduction to Flynn’s sexual side is with the help and permission of Pam, this other woman. It is the start of the whole issue of consent that pervades the book. Laurel is interested and attracted but she feels awkward about watching Pam and Flynn. Flynn is protective and while he doesn’t mind Laurel watching because he is attracted to her as well, he doesn’t want Pam to suffer.

"Curious is all well and good but I don't know you. And neither does she. If you freak out and go screaming about it all over town or the fucking internet, you could seriously fuck with the lives of two consenting adults. You follow?"

Laurel White is nearing thirty, living with two other girls, and waitressing in tourist trap in Quincy Market. She has an engineering degree, but she isn’t using it because Laurel is just floundering. She feels a bit dead inside. When Flynn arrives on the scene, she starts to feel alive.   One day she’s sitting outside and hears a young punk hassling his girlfriend, getting physical with her. Laurel is about to do something when she sees a big, brawny man dressed in construction worker togs walk up to the asshole, pick him up and pin him by his neck to a wall. Laurel thrilled a bit inside at this show of masculinity and she chases after him, both literally and figuratively. She tries to pick him up and he shoots her down but she persists and finally he gives her an address and a time and says that if, after going to this place, she still wants to date him, she should ask again.

Caffeine prickled in Laurel’s blood and she decided she liked him, officially. She’d like to be seen with a tall, strong, self-proclaimed asshole, out at a bar. Or better yet, to be visited by him while she was working. She’d like all her coworkers to see him and maybe warn her that he was trouble. She entertained a teenagerish fantasy in which she was the only woman who understood him, the dewy-eyed lead in her own wrong-side-of-the-tracks, star-crossed-lovers musical. Which was idiotic given that she wasn’t exactly an uptown princess.

There is something completely charming about Laurel.   I can’t remember the last time I read a heroine in a romance novel flirt and try to pick up a reluctant bachelor. Flynn is also charming but in a different way. He’s got a very attractive self confidence about him:

"Listen, kiddo," he said. "I'm a selfish prick, and I want to be the greatest fuck of your life and ruin you for every man who comes after me. But I'm not a mind reader, so I need some help. Otherwise I could end up as the douchebag who's got shitty taste in wine and totally traumatized you when you were thirty."

"So tell me," he breathed, right behind her ear. "What do you want me to do to you?"

Laurel and Flynn are true opposites in both physique – Laurel is pale, thin, weak whereas Flynn is big, muscular, tan – and personality – Flynn is confrontational and self assured while Laurel is uncertain and into avoidance. There is something magnetic about Flynn to Laurel and she can’t resist going to the address on the napkin at the designated time.

As I wrote on Tuesday, the issue of consent is pervasive throughout the story and it needs to be otherwise the very rough sex could be deemed an assault of violence rather than an assault of pleasure. Primarily because the story is told through the point of view of the woman, the assaultee, it’s fairly easy to see that everything that happens occurs because she wants it to. For all of the story, Laurel is in control even when she cedes it to Flynn. She struggles because she wants Flynn to be rougher. She resists because she likes to be held down. We are in her headspace, seeing her point of view. (I should note that while the story is told from her POV, Flynn is very verbal and open so we get to know him as a character as well).   It’s easy to see what Laurel sees in and wants from Flynn. He’s very open and generous. As Laurel correctly points out, in sex, he really makes himself vulnerable.

He made a face then laughed. "Don't think a woman's ever asked me that before- I just need you to be here with good intentions, I guess. Don't make me live the rest of my life feeling shitty about anything I do to you that you didn't warn me not to. That's about it."

I loved the frank way that they talked about sex and limits, mostly led by Flynn:

He nodded. "You want condoms with oral?" He seemed to be going down a mental checklist and Laurel wondered how many times he'd conducted this interview.

"Your choice." He got up and went to the filing cabinet standing between two windows, returning to hand her a paper with hospital letterhead dated two weeks prior-‘a long list of tests detailing Michael P. Flynn's negative status for all things contagious and undesirable.

Laurel made an amused face. "Is this what you call foreplay?"

"Pardon me if I kill your buzz, kiddo, but this is important to me. Should be to you too."

Even beyond the characters was the writing. I liked your way around a simile:

They fell silent, sleep coming down hard on Laurel like a narcotic curtain. Clothes, covers and no-cuddling rules abandoned, she fell asleep to the rhythmic sound of Flynn's breaths against her hair.

The bar was steeped in a breed of nasty fragrance that'd gone unnoticed before the smoking ban drove its camouflage outdoors-‘restroom base with fry grease overtones.

I think in romances, we start off with the assumption that the hero and heroine have no attraction to any one but each other and somehow any violation of that is infidelity, but the start of the book starts at the very beginning of Laurel and Flynn’s meeting and their relationship, such as it is, starts out there. Not in instant love but attraction. And then it grows from there in a very natural progression. The uncertainty of the status of their relationship is part of the emotional conflict. Are they just fuck buddies or is there something more between them? And to be clear, there is something more. Laurel and Flynn become exclusive for the short span of the book and they both find something in the other that fulfills them, not just sexually.

The main drawback in the story for me is that right when the emotional part of the story started – the exploration of why Laurel was just floundering or what attracted Flynn to Laurel (although that part was a little more clear) – the story ended. I really wanted more emotional introspection.

The story, though, just so cleverly and authentically voiced many of the insecurities and the emotional highs and lows of meeting someone and falling in love. The story was hot, the authorial voice was great, and I look forward to more McKenna stories. B-