I’ve developed a deep appreciation for New Zealand/Australian set books and when I saw this in the Samhain ARC listing, I requested it immediately. It is the first story of yours that I read. 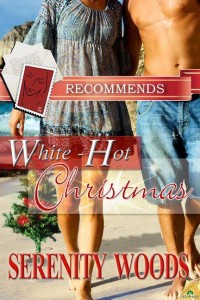 The Christmas story set in New Zealand immediately caught my attention. Merle Cameron comes to visit her sister and begins an affair with her brother-in-law’s best friend and cousin, Napoleon (Neon) Carter. It seems like a perfect setup. The affair’s end is a date certain when Merle returns to England. This provides both of them with the luxury of enjoying themselves without the attendant messy emotional feelings. This a lighthearted, sexy read but a totally enjoyable one.

Merle is a university lecturer (and I’m really not sure what that is in the UK as opposed to the US or even New Zealand). She has been caring for her mother who underwent a bout with breast cancer and has had little time for frivolity. Merle is spending a vacation with her sister, Bree, in New Zealand. She’s a bookish woman, having spent much of her life focused on trying to fulfill her very needy mother’s every whim. This vacation is as much an opportunity to relax and unwind as it is to visit her sister, Bree and Bree’s new husband, Jake.

Neon Carter is a firefighter who isn’t ready to settle down. He’s not opposed to getting married and having a family and is somewhat envious of his cousin Jake’s newlywed happiness. He complains to Jake that every woman suffers from tinnitus (ringing in their ears). “It just seems that with every woman I’ve been out with recently, we get to the third date and they start discussing the colour of the bridesmaids’ dresses.” Neon is sure that finding the right woman will take more than three weeks of dating even though Jake reports spending all of thirty minutes before realizing that he wanted to marry Bree.

My favorite part of the book was the realistic but funny dialogue between the characters whether it was Bree teasing Merle or Jake and Neon trading quips or sly interchanges between Merle and Neon. There were travelogue portions of the story which I found a bit dull. I also thought that the story could have delved deeper into the emotional conflicts such as the differences in intellect or social status. Merle delivers a slight insult to Neon early on when she is surprised by a Shakespeare reference. Neon is a firefighter and Merle is college professor (or something like it). Merle is puritanical compared to Neon and lacks self confidence of the women whom Neon dated in the past. Despite these issues, the largest looming emotional issue was Merle’s relationship with her mother. I wished I had seen more of how the mother had her hooks into Merle and why because the mother dictated the course of much of Merle’s life and I didn’t see Merle as a woman without backbone.

The dueling bets that Neon and Merle made with Jake and Bree over whether one could seduce the other were silly and if the genre wasn’t so replete with the “bet” perhaps the inclusion of the bets wouldn’t seem so stale. It could have been used as a joke throughout the story and that would have been a nice insider nod to a romance staple, but instead the “bet” was used unevenly throughout to cause minor emotional flares or provide a reason for the two to be indecisive about the relationship.

While Merle may not have had a lot of experience dating hot firemen in the past I was glad that the story didn’t dwell on that type of insecurity. That would have been a common and easy path instead, it focused on the geographic differences. No matter how easy it is to resolve the class or societal differences, Merle was from England and her sick mother, manipulative, neurotic mother, needed her. I liked the upbeat, modern tone of this book with the fun dialogue topped off with steamy love scenes. Christmas on the beach is irresistible. B-