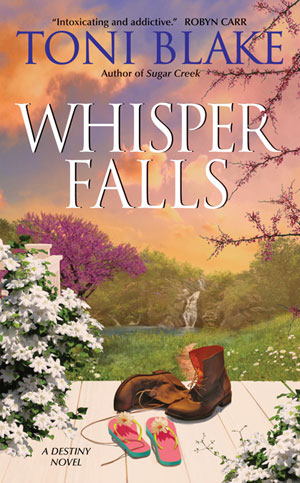 While listening to the DBSA podcast with Jaci Burton last week, Sarah mentioned having read and enjoyed your book, Whisper Falls. The book stood out to her because it features a heroine with Crohn’s disease, which is certainly unusual in the world of Romance. The premise intrigued me, so I gave it a whirl.

Tessa Sheridan is back in the town where she grew up, Destiny, OH. She’s moved back because a debilitating bout with Crohn’s disease has left her unable to fully take care of herself. She’s moved home to be close to her parents, who can help her when she has a flare up. But the trade off is, she’s left a very successful interior design business and despite her efforts, no one seems to be hiring interior designers in Destiny. One day, while catsitting her friend Amy’s cat, Mr. Knightley, he escapes the house. Tessa has no choice but to chase after him in her Hot Stuff pajamas. While looking for him, she bumps into her new noisy neighbor, Lucky Romo.

Lucky is also reluctantly back in Destiny. He’s moved home because he’s recently discovered that he has a child from a liaison that he had nine years ago. He’s decided that he’ll bring his motorcycle painting business to Destiny and set up shop. The town is close to Chillicothe , where there is an annual biker rodeo and a good concentration of bikers in the area, and Lucky is very talented. But he’s hiding from his family who lives right in Destiny. He’s not ready to see them after fleeing home when his sister died and leaving no word as to his whereabouts. During the time he was gone, Lucky made a number of poor decisions and has secrets he’d rather not reveal.

But when Lucky spies Tessa, he begins to flirt lightly with her. He knows that there will be no future for them, but he can’t seem to help his attraction to her. Soon, he hires her to redecorate a number of rooms in his house. He’s looking for “normal”, whatever that is. As Tessa works in his house, his attraction grows and one night he dares her to come to the biker bar where he hangs out. Tessa, wishing to live a little after being so sick for so long, takes him up on the dare and drags her friend, Rachel, along. Unfortunately for Lucky, Rachel is his brother Mike’s fiance. Mike is NOT pleased to see Rachel either at a biker bar, or with Lucky, who he blames from breaking his parents’ heart when he left town with no word. The evening ends in a scene, but not without Lucky finally making his move on Tessa. As Lucky and Tessa finally act on their attraction, both know that this will be a sexual relationship and nothing else, but the more time they spend together, the more they realize how well they get along and how much they’ve come to depend on each other.

This was an interesting book for me to read. I appreciated the treatment of Tessa’s illness. Crohn’s is no joke, and you depicted well the fact that she often doesn’t feel well, and Lucky’s drive to take care of her when she felt awful. While you didn’t touch on  some of the more unsavory aspects of Crohn’s, the depiction read true to me, and I thought it was an interesting internal force for Tessa to break out of her routine and try new things. I thought that Lucky’s past was credible and I liked that his son was never a distraction to the story, only a mild enhancement.  I understand why so many readers really enjoy your writing.

What I missed was a certain heat level. This felt like the kind of book I could happily hand my grandmother to read. The heat factor is very mild, and there are a number of references to things that made my teeth ache, in particular, the heroine’s idolization of Ellen Degeneres. She often times referred to Ellen as an inspiration to her to get out bed, or dance, or engage in life. And while I enjoy the Ellen show myself, and think she’s a wonderful example for people, it felt forced to me. The story has a very small town feel to it, which I believe a lot of readers will connect with. It is certainly a well written, entertaining contemporary romance that features a heroine with an interesting health issue. That being said, I also don’t think I’m the target audience for your work. I like my romance a little filthier and a whole lot angstier. My lack of deep engagement in the story means I can’t really grade it much higher than a B-, but I believe a lot of readers will disagree with me, and this book will be a satisfying, engaging read for them. This review is a case of good book, wrong reviewer, I think.

→ Kati
Previous article: Thursday News: English accents of the past, Metropolitan Museum photos now online, is YA too dark, and more on trigger warnings
Next Post: REVIEW: The Ruin of a Rogue by Miranda Neville