I specifically asked for this book to be sent to me by your publishing house because I had received the second one entitled “Dukes to the Left of Me, Princes to the Right” (a title I love by the way) and really wanted to read the first book in the series.   St. Martin sent me out a review copy right away.   I think that the contents of the book match the title pretty well. It’s a charming and light hearted story with enough depth to keep the story from being treacly.   What keeps this from being a full throated recommendation is that some elements of the story are pretty unbelievable and require a huge suspension of disbelief.   In some ways, I found the book to be intentionally farcical.   Whether I’m reading it correctly, I guess I don’t know, but that is the vein in which I took it.   And by farcical, I don’t mean funny, exactly but exaggerated intentionally for effect. 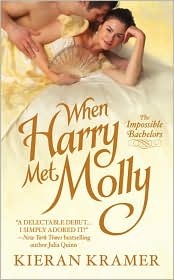 Harry is the younger son of the Duke of Mallan. From the moment he was born, Harry was the spare and after engaging in a scandal (kissing his brother’s betrothed), Harry has decided to live down to the expectations others have had of him. His next door neighbor, Molly (and sister of the betrothed), has been a thorn in Harry’s side since she was born. Molly was the one revealed his interlude with his brother’s betrothed. Molly was the one that got him banished to the army. And while the army was to be the making of Harry, he comes home under a cloud of disgrace, rumored to have consorted with his commanding officer’s wife while the rest of his unit suffered an ambush.

One night, carousing with his friends, The Prince of Wales shows up and says that the men must engage in a competition. Each will bring a mistress to a house party and the one with the “Most Delectable Companion” will be excused from the marriage mart for an entire year. It just so happens that Molly, only child of the wealthy Earl of Sutton, and Henry’s nemesis, is at the same inn where Harry and his mistress of the moment stop on the way to the week long competition. Molly is attempting an elopement with her father’s assistant, Cedric Alliston.

Harry is determined to win the contest and looked around for one of the most beautiful available courtesans. One reason Harry is not married already is that he doesn’t want to bring another person into his life who will only be disappointed in him. He’s got enough of those already. When his delectable mistress decides to run off with Cedric, Harry proposes Molly serve as his faux mistress for the competition, thus allowing Molly a way to escape ruin by secretly bringing her back to London and allowing him to win his competition.

Here is a real problem (besides the utter silliness of Prinny appearing through a secret door like some hedonic Santa Claus bringing whores and dildoes to every bad little boy in England). Molly is portraying this tarty prostitute / mistress in front of these other men and no one is going to know it is her when the gig is up just because she is wearing “loads of face powder and rouge”? I just find that idea ridiculous in the extreme. BUT, if you view this as a farce or a story gently poking fun at the genre and its crazy stories, then it kind of makes sense. I thought that the nod to this idea was tossed around here and there such as this line about secret doors in houses:

And then the bookcase opened. The one near the fire.

“What the hell?” said Arrow.

Harry knew, of course, that every great house had a secret door to somewhere, but he’d no idea his own club did.

What I did enjoy was seeing Molly blossom making friends with the lightskirts, revealing their various reasons behind becoming lightskirts (many do it because they have no other options) and helping them out in small ways, showing the competitive women that bonding together can have real advantages. This in turn helps Molly who had never had close friendships and had felt ignored by her father (benign neglect) and not as good as her older sister. Further, I thought Harry’s character growth was well done. He goes from being an adamant bachelor to recognizing that being a person no one expects anything from isn’t really all the fun or exciting:

He’d always been free of expectations, hadn’t he? So this notoriety–as well as every man-about-town activity he’d once viewed with enthusiasm and pleasure–was actually somewhat…

Beneath the silly games and the improbable nature of the story were two very likeable characters with insecurities who fall in love with each other and the reader is allowed to see what it is the two love about each other. In a genre of insta lust and insta love, this was a nice departure. In the beginning, these two really did not like each other. Plus, some of the incidents, lines, scenes are pretty funny. Harry has a very wry sense of humor and Molly’s “fish out of water” portrayal provided moments of comic relief. I wavered between a C+ and B-.