REVIEW: What’s Left of Me by Kat Zhang

When I first saw the premise for your debut YA novel, I was intrigued. Everyone is born with two souls but one gains dominance until finally, the other vanishes in childhood? Interesting yet twisted – my kind of thing. It was enough to make me look past the dystopian setting that’s become so overdone these days. 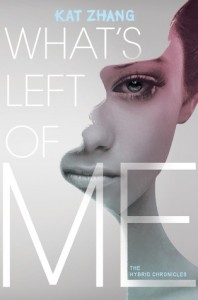 Addie and Eva are two souls born into the same body. But unlike other children, they settled late. Most children begin settling in kindergarten. For them, it didn’t happen until they were twelve. (Settling is the process by which one soul grows dominant and the other fades away.)

In fact, they never settled at all. Addie gained dominance – enough so that everyone was fooled into thinking the settling process had happened – but Eva didn’t fade away. While she could no longer move their body or speak, she was still aware and conscious. This made Addie and Eva a Hybrid.

Hybrids are major no-nos in the Americas. Upon discovery, they’re rounded up and taken away, never to be seen again. At best, they’re considered mentally unstable. At worst, they’re viewed as dangers to society.

So Addie and Eva have learned how to lie, to pretend that they’ve settled and that the only person inside their body is Addie and that Eva is merely a fond memory. That is, until Eva meets another Hybrid hiding in plain sight and realizes she has the opportunity to move their body once again. Of course, this choice doesn’t come without risk.

I really enjoyed following the narrative through Eva’s eyes. I wouldn’t call her the most likeable protagonist, but she was certainly compelling. It must be terrible to be trapped in a body you can no longer control but are still forced live a half-existence, living vicariously through someone else. But while I understand and sympathize with her bitterness, there were points in the story where I simply felt she was selfish. I know. Newsflash: teenagers, and people in general, can be selfish. But her desperation to regain control led to some seriously reckless behavior, and it was hard for me to like her at those points. It wasn’t just her she was endangering; she was also placing Addie in danger. Worse still, it would be Addie who’d bear the brunt of the repercussions because she was the one in control, in addition to being the one legally recognized as being in control. It wouldn’t have bothered me so much if Eva acknowledged this once in a while, but she rarely did.

On the other hand, I liked the relationship between Eva and Addie. It was like the most intense identical twin relationship. They had distinctive personalities, and their respective concerns and desires reflected that. I admit, while Eva was the narrator, I actually sympathized with Addie more. I guess I like the cautious, reserved ones more.

There is a romantic subplot but it’s in the background, which is nice. One of my major complaints about the dystopian YA genre is that the romance often overtakes the story. Maybe it’s just the SFF reader in me. I rebel against the idea of dystopian governments and societies being relegated to afterthoughts and seasoning.

I’ll be the first to admit the premise can be a little out there. Like most dystopians, you just have to accept it and just roll with it. If you expect any sort of explanation for how the world got this way, it’s not coming. Maybe it will in one of the sequels but it’s definitely not in this one. I wouldn’t have minded the lack of explanation except with the way the plot unfolded and the way certain conflicts between Hybrids and the government were revealed, the nonexistent worldbuilding became more and more apparent. Nonexistent worldbuilding can only work if the plot and conflict doesn’t reference it and unfortunately, both began to lean on it heavily as the novel progressed.

By the end of the book, I was trying to puzzle out how everyone in the world obtained two souls. I know some cultures believe in that, but nonetheless that’s a major change from our present-day society, so I need something more to go on. Was this far future? Was it alternate history? A little more exposition would have greatly helped on that score.

Despite the absent worldbuilding and lack of explanation for how things ended up the way they did, I found What’s Left of Me to be a worthwhile read. I thought Eva’s voice was very authentic for her circumstances and that her relationship with Addie was genuine. That said, while I enjoyed this book, I’m not moved to pick up the sequel. We’ll see. B-

→ Jia
Previous article: How independent booksellers failed to recognize the buying power of the mass market reader
Next Post: Open Thread for Readers for October 2012