REVIEW: What I Did For Love by Susan Elizabeth Phillips 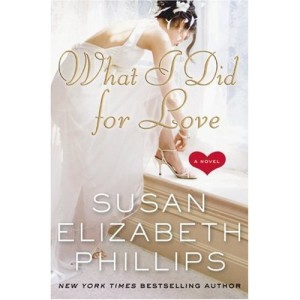 I count you as one of my favorite romance authors. I practically camp out at my local bookstore whenever your books are released. Needless to say, I was pretty excited to get my hands on this one.

Georgie York is best known for her role as the spunky Scooter Brown on America’s favorite sitcom "Skip and Scooter." Although she no longer has the bright red Orphan Annie hair or the trademark curls, Georgie still reigns as America’s sweetheart. Even a series of box office flops can’t seem to diminish her public appeal.

It’s not just the poor box office numbers that are plaguing Georgie. She’s also got a Brangelina-esque problem to worry about. Her movie star ex-husband Lance Marks left her for sexy do-gooder actress Jade Gentry. Barely surviving the heartbreak of her husband’s abandonment and the subsequent divorce, Georgie is shattered to find out that Jade is also pregnant. With paparazzi everywhere, Georgie goes to Vegas for a change of scenery.

Bramwell Shepherd is the Skip to Georgie’s Scooter. His career is going nowhere fast, and he’s only got himself to blame. He follows Georgie to Vegas where the former co-stars attend a party together and unintentionally drink some sort of drug laced beverage. One minute, they’re drinking and gambling. The next, they’re waking up together only to realize they got married Ross and Rachel style. In an attempt to avoid more bad publicity, Georgie convinces Bram to agree to a fake marriage for one year in exchange for half a million dollars and better press by association.

Like many of your books, What I did For Love is about second chances. A second chance at love, a second chance at a career, a second chance as a father, and so on. Although it’s a theme that touches upon most characters, it was better executed with some than with others. After some initial misgivings and despite some irritation with cranky housekeeper Chaz, I enjoyed reading about her second chance at happiness. I also enjoyed the subplot with Georgie’s career driven father. Falling under the dislike category are the Brangelina ex-husband and new wife. For a man who has been the catalyst of Georgie’s own second chance at love, it was disappointing to discover this character was so absurdly shallow and cheesy as to call into question the intelligence of our protagonist.

I noticed something right away and it’s something that jarred me from the story. I found myself comparing Georgie and Bram to two of my favorite characters from Honey Moon. Just like Honey, Georgie became America’s sweetheart as the lead on a wholesome family tv show. Like Honey, she was infatuated with her jerk of a co-star.   Other similarities include growing stifled with her image and wanted a change in her career.

As for Bram, he wasn’t driven by the same demons as Eric Dillon, but he did show a similar selfishness and self-destruction in his youth. Like Eric, he too is trying to escape his past and atone for his actions. But while Eric acted liked an ass because he felt more than a little self-loathing, Bram’s destructive behavior in his youth was basically due to his desire to party too hard.

Like Honey and Eric, Georgie and Bram are an odd couple. Bram has his amazing good looks complete with chip on shoulder. Georgie isn’t conventionally beautiful, but she does have a likability that’s hard to resist. Both go their own ways only to be reunited years later and fall in love. There are of course many differences among them of which include the absence of Honey’s earlier May-December romance, roller coaster symbolism that’s kind of WTF, and the heavier tone that weighs down Honey Moon. But . . . it was just enough that I couldn’t avoid immediately spotting the similarities, making the comparison, and ultimately finding Georgie and Eric a little lacking.

Despite the comparisons, I did like Georgie and Bram to some degree. They’re by no means my favorite of your protagonists, but they each have a vulnerability that is compelling to read.   For example, we find out pretty quickly that Georgie hates Bram with a passion and has ever since their tv show years. But we’re also told that:

Georgie had loved Skip Scofield. She loved everything about him. His big heart, his loyalty, the way he’d tried to protect Scooter from the Scofield family. The way he’d eventually fallen in love with her silly round face and rubber-band mouth. She’d loved everything except the man Skip turned into when the cameras stopped rolling.

I love that description. It says so much about the 16 year old girl Georgie used to be. The girl who had trouble distinguishing between reality and fiction. The girl who hadn’t always hated Bramwell Shepherd, but who had, in fact, imagined herself in love with him.

However, that was years and several difficult life lessons ago. Georgie and Bram haven’t been secretly in love with or lusting after each other all this time. They went their separate ways when the show ended, and gladly. Years later, Georgie still hasn’t forgiven him for his behavior toward her. And while Bram’s resents Georgie out of some misplaced sort of jealousy, Georgie’s anger toward him is very much deserved. Their relationship from resentment to distrust to trust to love is accompanied by your trademark humor. It didn’t work for me as well as your other books, but it’s still a very quick and easy read.

Other readers may be more amused than I by the lengths Georgie and Bram will go to in order to advance their careers and save face in the public eye. They may also be amused by the Hollywood setting and by what seems like a realistic portrayal of paparazzi and life as a celebrity. From lunch at The Ivy to mansions in the Pacific Palisades, the Hollywood setting was convincingly executed.   However, this book didn’t entirely click for me for several reasons.   The Brad Pitt and Angelina Jolie characters were jarring as was the inevitable comparison of Georgie to Jennifer Aniston.   This sort of thing may amuse others, but not me. And don’t even get me started on the SARS scare.

And although I appreciated Georgie and Bram’s vulnerability, I didn’t entirely sympathize with them. Georgie is a successful actress, she’s rich, and loved by millions, but she’s unhappy because the paparazzi have hounded her, turning her heartbreak over her divorce into a public scandal.   But, as it turns out, the ex-husband was a complete ass.   Why exactly was she so heartbroken? I would have been happy to be rid of the guy.   And yeah, she’s not happy with her career, but did I mention that she’s frickin’ rich?   Ok, so people don’t take her seriously as a dramatic actress. Too bad.   Do something instead of just complaining about it. I guess I’m just not enamored enough of the celebrity lifestyle to find Georgie’s utter devotion to saving her public image- lie though it may be- a little sad.

I admired Bram’s determination to get his career on track, but I had some trouble connecting with him too. Part of that is because he threw it all away years ago, something which he can blame no one but himself.   The other part is his use of Georgie to get ahead in Hollywood. It’s that mutual use of each other for their own careers that I found distasteful, and which prevented me from truly enjoying this story as I wanted to.

I would recommend this to your fans.   For anyone new to your work, I would advise them to start with one of your earlier books.

This book can be purchased in hardcover from Amazon or ebook format from the Sony Store and other etailers beginning January 27, 2009.