REVIEW: Wedding of The Season by Laura Lee Guhrke

When I read a couple of books in your bachelor girls series, I wasn't sure your historical voice was compatible with my reader's ear. Then Jane started urging me to read your new back-to-back releases, which are set a few (crucial) years later, starting with Wedding of The Season. And I am glad I did, both because I wish there were more Romances set in the early years of the 20th century, and because I found Beatrix and Will's story quite entertaining and appropriately modern. 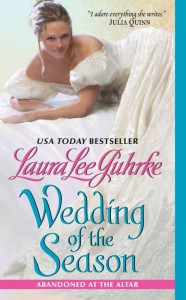 It was never in doubt that Lady Beatrix Danbury would marry William Mallory (now the Duke of Sunderland). Until, that is, the groom hied off to Egypt mere weeks before the wedding, persuaded to follow his love of archaeology rather than his love of childhood sweetheart Beatrix and his duties as the Marquess of Richfield. Besides the humiliation of having her prospective groom flee so precipitously, Beatrix must also deal with the emotional devastation of losing the only man she could imagine herself ever truly loving. So six years later, when Will returns to England to manage some of his ducal responsibilities and raise more money for his archaeological endeavors, Beatrix is slightly less than happy to run into him. And by "run into him," I mean she literally almost runs over him with her Daimler, which she drives through the countryside with all the joy she is not feeling about her second upcoming wedding to the handsome and serious Duke of Trathen (Aidan).

This time Beatrix is determined to make it to the altar, and she and Aidan share a mutual respect she believes will make for a solid partnership and ample security for her and their children. He wouldn't run off like Will did, and he wouldn't abandon his family and the duties of his title. So when she find Will sprawled in front of her car, thrown and kicked by a hot young gelding, she cannot imagine what has brought him back to England, let alone, straight into her path:

She made a sound of obvious skepticism. "I should have known not to expect a serious answer from you."

"None of your business. Is that answer serious enough for you?" He tried to stand up, but pain shot through his knee, making him grimace. "Damn, he muttered as he sank back down to the ground. "I really took a tumble this time."

She seemed indifferent to his pain. "I'd have thought six years away would have given you some measure of maturity, but I was obviously mistaken."

Will bit back the angry words that hovered on the tip of his tongue, and strove to maintain his careless air. "Six years?" he drawled after a moment. "My, how time does fly."

"Doesn't it? I'm surprised you would even bother to come back after all this time."

"I don't know why you should be surprised, old thing," he answered, and gave her a wink, "You didn't really think I'd miss your wedding, did you?"

Aaaaaand we're off. The first half of the novel is bright with these kinds of exchanges between Will and Beatrix, as well as more poignant expressions of the main obstacle to their mutual happiness, namely that Will wanted a life of travel and adventure, while Beatrix wanted a life of security and stability. Will accuses her of being afraid, reminding her of the things she wouldn't do as a young girl (riding a horse without a sidesaddle, diving off a cliff into the sea), for fear of disapproval from her very strict father. Beatrix explains that there is an enormous difference between riding astride and relocating to Egypt:

"I wanted children, Will. Just where was I supposed to have them? In a tent?"

"I told you I would build a house for you!" he shouted.

"No, Will…Not for me. It would have been an expedition house with bedrooms for your staff. I was engaged to a duke, not an archaeologist! And I had every right to continue to expect the security for me and my children that your position afforded us."

Even as we recognize that this novel will be a reunion story, the obstacles are real and the conflict understandable from both sides. First there is the issue of the new engagement, which is very real, even if Beatrix and Aidan do not share a great romantic passion for one another. Aidan is an honorable and upstanding man, a kind man, as well, and Beatrix knows that marrying him will give her the material elements of the life she desires. And since her experience of love was so emotionally disappointing, she does a fair job of convincing herself that such a feeling might be more of a hindrance than a help to a successful marriage and family. And even if Beatrix were not engaged, there are hurt feelings, wounded pride, and lack of trust on both sides.

In terms of Will and Beatrix's own priorities, Will has a passion for archaeology, and in an era where the aristocracy was in serious decline, his interests have the potential to create new economic opportunities. His search for Tutankhamun may be a bit historically precipitous (Theodore Davis found the first Tut artifacts in 1905, and Tut's tomb was not a common object of search this early), there was certainly a lot of work going on in Egypt, and quite a few riches making their way back to England, during this time. Beatrix's passion for a sedate English life is also heartfelt, for she is hardly a sedate woman herself, but she truly loves England and the rhythms of her life there.

It is a conflict that is both interesting and not easy to resolve (this the six year separation and unresolved feelings), especially for two likeable but stubborn characters. It is not merely that Beatrix is engaged to another man; even were that obstacle not present, there is a very real problem of how to negotiate a stable, happy marriage and family between two people who have such seemingly different life goals and values. And for much of the novel, the way these differences are handled feels fresh and engaging. Even with the clichéd phrases I've noticed in past books, as well, there is a modern feel to the authorial voice in this novel that fits the modern characters and the modern setting. Beatrix wears Turkish trousers (i.e. bloomers), drives a car, and has scandalous friends (most notably the unconventional Julia, aka Baronness Yardley, from whom she received the car and the driving lessons). But she is content to let her wildness be expressed within the confines of a more conventional life). And while Will's flight to Egypt can reasonably be seen as selfish and irresponsible (in terms of his family duties), his unabashed love for Beatrix and the character growth he demonstrates through the course of the novel, makes it difficult to disregard the importance of his dreams – in his own way, he is striving to be a self-made man, a very modern ambition for a man of his class.

The problem – for me, at least – is that this wonderfully earnest conflict ends up being resolved in a way that does not do the set up much justice. I cannot go into a lot of detail here without spoiling the main thread of the novel's plot, but I will say that the resolution came across to me as both abrupt and emotionally unsatisfying. Further, it undermined the smart characterization of Beatrix as a woman who had good reasons for valuing the life she pursued. It was especially frustrating for me because so much of my engagement in the novel was grounded in the clever construction of the character conflict and my anticipation at how it was going to be unraveled. Had the earlier sections of the novel not been so fun for me to read, my overall grade would have been much lower. Given my enjoyment of the first two-thirds to three-quarters of the book, however, it averages out to a B-.