REVIEW: Wait for You by J. Lynn

I’m beginning to think there was a secret ceremony attended by a bunch of NA novelists at which they all swore on a copy of first edition of Twilight to include at least six of the following plot points in their books:

1) the heroine must be, in some way, socially awkward or shy. It’s a plus if she doesn’t realize how gorgeous she is.

2) upon arriving at school, she immediately meets cute the biggest babe magnet on campus. It’s a plus if he needs academic tutoring.

3) the babe magnet is incredibly drawn to the heroine despite the fact that she’s not his “type.”

4) the young woman is incredibly drawn to the hero despite the fact that he’s not her “type.”

5) there is some obstacle keeping them from dating.

6) one and/or the other has something in their past they are hiding from the other. It’s a plus if it’s one of those “I blame myself for something awful thing” sort of thing.

7) at some point, one/and or the other will be wasted and will say things he or she would never say sober. It’s a minus if sex occurs during or right after this revelation.

8) they finally hook up and then break up.

10) they bonk like bedazzled bunnies and live happily for now.

Wait for You hews to this ten step program fairly closely. 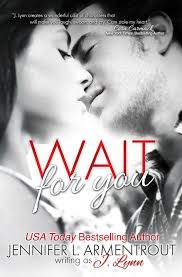 Avery Morgansten runs into tall, yummy Cameron Hamilton the first day of school as she’s barreling into her Astronomy class.

Something strong and hard went around my waist, stopping my free fall. My bag hit the floor, spilling overpriced books and pens across the shiny floor. My pens! My glorious pens rolled everywhere. A second later I was pressed against the wall.

The wall was strangely warm.

The wall was so not a wall. It was a guy. My heart stopped and for a frightening second, pressure clamped down on my chest and I couldn’t move or think. I was thrown back five years. Stuck. Couldn’t move. Air punched from my lungs in a painful rush as tingles spread up the back of my neck. Every muscle locked up.

“Hey,” the voice softened, edged with concern. “Are you okay?”

I forced myself to take a deep breath—to just breathe. I needed to breathe. Air in. Air out. I had practiced this over and over again for five years. I wasn’t fourteen anymore. I wasn’t there. I was here, halfway across the country.

Two fingers pressed under my chin, forcing my head up. Startling, deep blue eyes framed with thick, black lashes fixed on mine. A blue so vibrant and electric, and such a stark contrast against the black pupils, I wondered if they were real.

And then it hit me.

A guy was holding me. A guy had never held me. I didn’t count that one time, because that time didn’t count for shit, and I was pressed against him, thigh to thigh, my chest to his. Like we were dancing. My senses fried as I inhaled the light scent of cologne. Wow. It smelled good and expensive, like his…

Anger suddenly rushed through me, a sweet and familiar thing, pushing away the old panic and confusion. I latched onto it desperately and found my voice. “Let. Go. Of. Me.”

Cam has the same class as Avery but she is so overwhelmed by their encounter and her fears she sprints away from him and the class. Later that day, she again has a dramatic meeting with Cam. This time, he almost runs her over with his big silver truck. He offers her a ride, but, again, she can’t get away from him fast enough.

Avery finds, however, she can’t avoid Cam because he lives in the apartment two doors down from hers. But Cam has a tortoise named Raphael which combined with his “baby blues” and his “eight pack” abs helps Avery to relax around Cam just a tiny bit. Slowly, the two become friends.

Cam falls for Avery almost as soon as he meets her. He bakes her cookies, calls her sweetheart, is kind and patient, tells her she’s pretty, and is pretty much perfect. He teases her and flirts with her but never pushes her anywhere she’s not, albeit cautiously, ready to go. If you like your heroes tall, gorgeous, and flawless, you’ll fall hard for Cam. I don’t like flawless heroes, so I found him a bit boring.

The book is told in first person by Avery, a narration Ms. Lynn does a good job with. We get to know not only Cam, but Avery’s new best buds, Jacob and Brittany. Jacob is gay and portrayed in a nicely non-cliched way. Brittany is a typical college girl whose function, I think, is to give Avery a way to talk through her changing feelings about Cam. The story flows smoothly and the Avery’s voice offers enough detail to keep the reader on top of the story but not so much that the POV seems forced.

Ms. Lynn writes engaging, witty dialogue although it often doesn’t sound authentic. Everyone knows just what to say, is self-aware, and there’s never any arguing over trivial things. Here, a week into knowing each other, Avery awakes to find Cam knocking on her door so he may cook her breakfast.

“Cam, what are you doing? It’s eight in the morning.”

“Thanks for the update on the time.” He headed straight for my kitchen. “It’s one thing I’ve never been able to master: the telling of time.”

I frowned as I padded after him. “Why are you here?”

“You can’t do that in your own kitchen?” I ask, scrubbing at my eyes. After the astronomy assignment and the phone call, he was the last person I wanted to see at a buttcrack time in the morning.

“My kitchen isn’t as exciting as yours.” He put his stuff on the counter and faced me. His hair was damp and curlier than normal. How was it possible for him to look so good when it was obvious he’d just rolled out of bed and showered? There wasn’t even a dusting of morning scruff on his smooth cheeks. And he made sweats and a plain old tee shirt look damn good. “And Ollie is passed out on the living room floor.”

“Yep. Face down, snoring and drooling a little. It’s not an appetizing atmosphere.”

“Well, neither is my apartment.” He needed to go. He had no business being here.

Cam leaned against my counter, folding his arms. “Oh, I don’t know about that…” His gaze moved from the top of my disheveled head and all the way down to the tips of my curled toes. It was like a physical touch, causing my breath to catch. “Your kitchen, right this second, is very appetizing.”

A flush crawled across my cheeks. “I’m not going out with you, Cam.”

“I didn’t ask you at this moment, now did I?” One side of his lips curved up. “But you will eventually.”

“Most would say amazing.”

I rolled my eyes. “Only in your head.”

By the novel’s end, Avery and Cam have reached step ten (although there were no condoms involved, a minus for me). When I finished it, I felt I’d read a well-written typical New Adult novel. It didn’t do much for me but it didn’t bother me either.  I’d have enjoyed it more if Cam was a bit less man-god and the plot not quite so calculable. I continue to think I’m not the right audience for NA, perhaps because I have four new adults of my own, all currently at home, and creating an unbelievable amount of dirty laundry. Books about their age group aren’t escapism for me; they’re a reminder I need, for the third time this week, to go to the grocery store.

I give Wait for You a B-. If you like New Adult, you’ll probably like Ms. Lynn’s novel.