This is a fun spy caper book with a great and very competent heroine. It requires a huge suspension of disbelief but if the reader can let go, it is a fun ride.

Maggie Kincaid is an information services librarian at a large university whose similarity to another woman who posed nude in a car calendar has turned Maggie into an unintentional celebrity on her college campus.

Susan leaned a hip against Maggie’s desk. “So, what did your mother say about Miss April Hotrod?”

Maggie rolled her eyes as she set up her laptop. “It took me nearly two hours to convince her it wasn’t me in the picture.” She opened the top desk drawer and pulled out the calendar she’d tossed there. The nude woman in the picture, sprawled suggestively over the hood of a car stared up at her. Maggie still wasn’t used to that almost familiar face gazing back at her with lowered eyelids and a seductive pout.

She tossed the calendar into the trashcan underneath her desk. “She’s everywhere, damn it.”

“Um, have you seen the website yet? With our resident librarian centerfold?”

“There’s a website?” The words came out as a whisper and Maggie closed her eyes to try to stop the heat that flooded her cheeks. She’d aced her exams and had attended the University of Washington on a full scholarship. She’d taken pride in her academic achievements. Over the years she’d built a good, solid reputation at the university. Now she was popular for the size of her boobs and a likeness to a nude centerfold. It was frustrating. And possibly career-ending. 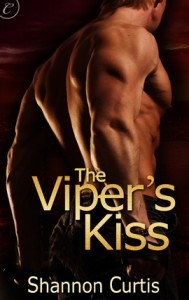 This resemblance leads to Maggie’s arrest for espionage and murder. She’s wanted by oversexed college students, police, Luke Fletcher of McCormack Security, and some very bad men all who believe that she is someone else. The police and Luke and the very bad men believe Maggie to be the Viper, a woman who stole a prototype suit from Tek-Intel, one that must be recovered at all costs. Maggie did work for Tek-Intel but it was only remote since the on site work setting up a virtual research environment that allowed the university and Tek-Intel to work together on research projects.

Someone using Maggie’s electronic footprint hacked in, sent out a virus and stole a research prototype that every one wants. She just needs to convince Luke and the other men of McCormack Security that she really is just a librarian and not the super spy that everyone believes that she is. A series of events helps to provide plausible doubt which allows Luke to feel a bit less guilty when he succumbs to the desire he feels for Maggie.

This is really an action book and there is very little emotional character arc for the individuals. If there is one, the focus is on Maggie whose past relationships have all ended poorly and whose mother has terminal cancer. The story arc takes Maggie from hiding in her library to meeting every challenge the world throws at her whether it is needle wielding goons intent on torturing her to special security experts.

Maggie carries on the long tradition of truly super librarians. (If I am ever on the Amazing Race, I hope to take a librarian with me. According to romance novels, under their prim skirts and buttoned up shirts, they are incredibly capable individuals). She doesn’t sit cowering in the bathroom, instead she is looking for every escape route. She pays attention and she fights back. There is just the right amount of sexual tension and humor injected into the story as well:

She glared at him, adrenalin still coursing through her veins. “Point and shoot, you said. Point and bloody shoot.” She started to shake. God, the woman had nearly killed her.

Luke’s winded chuckle reached her ears as he bent down and picked up the weapon. “Noah’s gun has a safety.”

The mistaken identity recalled to mind Adventures in Babysitting wherein the babysitter looks just like Miss January and it requires the same kind of suspension of disbelief. The reader has to buy into any number of improbable occurrences and coincidences. Maggie, despite being built like a playboy centerfold, is so retiring she is still a virgin at the age of thirty. (I can hear many of my readers groaning at this point). I found it difficult to believe how easy it was for Maggie to escape at times.

I was reading a review for the next Mission Impossible movie and the critic mentioned that he kept looking for the wires holding the actors up during the improbable but amazing action scenes. He couldn’t see them in the movie, but I felt like there were scenes in the book where the wires were clearly visible and that diminished my enjoyment somewhat.

However, the heroine is a capable and enjoyable protagonist with an equally capable and sexy hero by her side. The attraction between the two was well integrated into the book and I don’t recall a moment where I thought that they should be out hunting the bad guys instead of enjoying the horizontal mamba. It’s a turn off your brain and go with the flow book and sometimes that hits exactly the right spot. B-