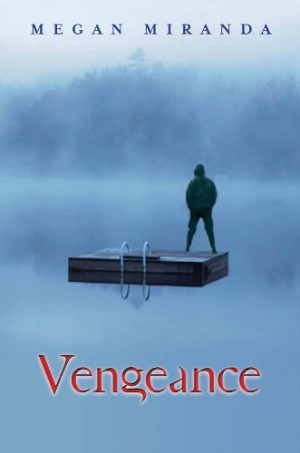 I loved your first novel, Fracture. Part medical mystery and part psychological thriller, I admit it was the shifting relationship between Delaney and Decker that caught and held my attention. I adore the friends to lovers trope, and it was done so well in that book. Even though I thought Fracture was an excellent standalone, I was happy to see there was a sequel. To say I jumped onto the request button on NetGalley is an understatement.

Vengeance picks up a few months after the events of Fracture. Things have settled down but the aftermath is obvious. Rumors of a curse circulate around town. Delaney fell through the ice and was saved, but not before being declared clinically dead for 11 minutes. And after she came back, an old lady passes away, a beloved friend dies in Delaney’s arms, and yet another boy perishes when he falls through the ice covering the lake. Delaney cheated death and death is unsatisfied.

It’s easy to dismiss these occurrences as coincidences. People die every day. Natural causes, epilepsy, recklessness… There are reasons. But when a series of unfortunate accidents begin to happen, all centering around Delaney, those coincidences become hard to explain away. Is death really retaliating for being cheated of Delaney’s life or is it something more sinister?

This is an odd book. I don’t have any other way to put it. I enjoyed it. It’s moody and atmospheric and I eat that stuff up with a spoon. That said, it doesn’t really live up to the tight package that was Fracture. Maybe that’s not a fair comparison but there it is.

Vengeance is told from the POV of Decker and while I’m not sure I liked him as a narrator, it was a necessary change for the story. Decker lives on instinct and feelings. Delaney, on the other hand, is all logic and facts. The kind of story Vengeance tells can only be told through Decker’s eyes. It’s his narration that plants the seeds of doubt that a curse could actually exist. After all, Delaney can tell when someone is going to die. Why wouldn’t it be possible for death to be angry about being cheated? I realize it’s very Final Destination but it’s the doubt that breathes life into the plot.

If Fracture was about the many ways traumatic events put pressure on relationships, revealing their weaknesses, Vengeance is about how grief over losing someone can transform a person, revealing the ugliness hidden beneath the surface and driving them to do terrible things. I actually thought the depiction of Decker’s grief was spot-on. When you’re in the middle of it, you don’t think clearly. You don’t see clearly. You think you’re acting fine when you’re really being an asshole to the people who love and support you most.

The mystery of the curse was a little muddled. While the red herring was killer and did a good job masking the truth, it also added to the lack of cohesion in the narrative. In fact, when the truth is revealed, it’s rather underwhelming. You see, there’s Decker’s grief and the way it strains his relationship with Delaney. Then there are the bad things happening to their group of friends. Then there’s Delaney’s attempts to look into her strange ability. So many threads that just needed to come together better. It’s just not as tight a story as it could be, which is a shame.

I don’t regret reading Vengeance. I’m glad to revisit Decker and Delaney’s relationship and how their lives have changed after. But I also can’t help but think this is a sequel that doesn’t really need to exist. B-

→ Jia
Previous article: Friday News: A Tale of Sony and Kobo
Next Post: Reading List by Jennie for November and December