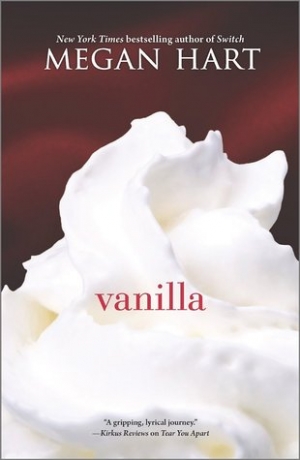 I try not to have any expectations when starting a Hart book, unless it’s the expectation that it won’t be a traditionally structured genre romance. That’s definitely the case here. The blurb centers on two people named Elise and Niall, but our narrator Elise doesn’t meet Niall until page 81. Before then, her attention is in two other places: a no-strings relationship with her sexual submissive, Esteban, which is starting to feel complicated, and her enduring heartbreak over a man from her past. (To say nothing of a lot of family drama around her beloved nephew’s upcoming bar mitzvah.) Moreover, both of those men continue to have a strong place in her physical and/or emotional life, as a relationship with Niall develops very slowly — so if you’re a one man/one woman reader, this won’t be the book for you.

Still, there’s an overall romantic sensibility to Hart’s books, even when they’re classified as erotica, as this is. Most of them are set in the same world, and when we see returning characters from previous stories (which happens frequently in this one) they’re still happily coupled. There’s definitely the potential for romance readers to enjoy this. I mostly enjoyed it while reading it, though afterward I started to have more doubts.

When Elise meets Niall, he turns her on in a number of ways. He’s attentive to her wishes, tuned into her preferences, and keeps up with her conversationally. “Oh, the banter. It was like putting a match to a pile of dry leaves.” But there are two issues: he’s blowing hot and cold with her, presumably because of discomfort with her kinks, and he’s unquestionably vanilla.

“You have this idea about me. About leather and latex and whips and chains. You probably get it from watching movies, not even necessarily porn, or from the media coverage of that popular book trend. You think that men who like to bend to the will of a woman are pussies or weak,” I told him. “So you make jokes to me about getting a spanking because that’s what you think you know, but here’s the thing. I’ve had lots of men joke with me about getting spanked, and the ones who really like it and want it, all of them, every single one of them, can’t stop from showing the truth in their eyes. It’s sometimes really subtle, the faintest look, sometimes the way their pupils dilate or even how they might cut their gaze away, if they’re somehow ashamed of wanting it. But the eyes always give it away.”

I shook my head.

This isn’t necessarily a dealbreaker for Elise, who gets off on giving pleasure and getting adoration more than on inflicting pain, and she’s certainly willing to give the connection she feels with Niall a try. Ultimately, their main conflict is not Elise’s kinks, but Niall’s response to them — or more accurately, his response to his idea about them. I’ve seen several readers complain that Elise pushes Niall too much to go along with what she wants and I don’t agree at all; if anything, the opposite is true.

I found Elise very sympathetic. As usual, Hart explains the psychology of kink in elegantly simple language, and incorporates it into sex scenes that are so compelling, you don’t have to share the kinks to find them scorching hot. But there’s a lot more to Elise than just her sexual desires; her attempts to deal with her difficult family show a person doing her best to be ethical and stay balanced, while rarely getting the care she needs from the people she loves the most. Mainly, she is touchingly vulnerable. In one powerful scene, Esteban is the one to give her aftercare, when she breaks down emotionally after dominating him.

Elise is very much in need of love and understanding, and the story is intended to show that Niall can meet her particular needs without being kinky himself (something which in my experience is certainly posssible, if difficult.) This didn’t entirely work for me — not because I couldn’t believe they could fall in love and make it work, but because I wasn’t convinced by the reasons Elise gives for falling in love with him. She views him through a haze of idealized perfection than makes her sound more like an infatuated schoolgirl than a 34 year old woman in love. (He can even make her come in the missionary position!) Perhaps intentionally, it makes it even more jarring when he lets her down.

Niall became a more convincing character when he started to reveal his real thoughts, and I was more able to embrace the romance:

Spoiler (spoiler for the ending): Show

Niall has a lot of understandable fears and misconceptions around Elise’s sex life:

By the end of the story though, Niall has become open to some exploration and compromise, and Elise has become able to find his misconceptions funny.


The language is sometimes repetitive, and some readers may feel that Elise over-explains things, although I enjoyed the explanations. And although she’s generally consciously open-minded about other people’s kink, there’s a touch of judgement at one point, which I guess is forgivable in a casual conversation. One thing that she doesn’t over-explain bothered me:

After Niall hurts Elise badly, she turns to Esteban and has sex with him. This is definitely about comfort rather than Elise getting something she’s been missing, so it works in the context of the story. But Elise doesn’t ponder what this means to her relationship with Niall, or how she should address it, dismissing it easily as if it had nothing to do with them–which I’m quite sure Niall would disagree with.

My main problem with the book seems to be the part that other readers love the most. Elise works for Alex Kennedy, so this is kind of a sequel to the three previous books featuring him. I don’t remember what I thought of Alex before, but here I found him tiresomely jovial, and desperately unfunny; Elise’s frequent comments about his irresistible charm were thoroughly unconvincing. (In general, Elise’s idea of fun banter is not what I’d call scintillating.) Having an entire chapter given over to him describing the events from previous books felt like intrusive fan service.

It was definitely a mixed book for me, but I was still intrigued by its themes and and enjoyed the writing considerably. I’m curious to see whether the negative or the positive aspects will most linger in my mind, over time. B-