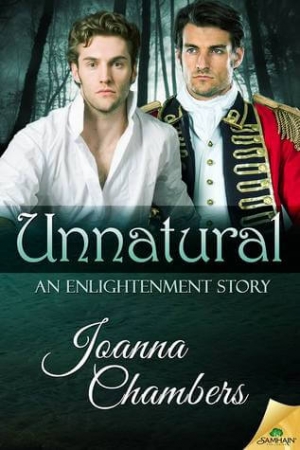 I enjoyed your Enlightenment series featuring Murdo Balfour and David Lauriston. One of the secondary characters in it was Captain Iain Sinclair, who became a (platonic) friend of Murdo’s. Iain was sent to Manchester as part of the Crown’s efforts to stop civil unrest and later, assigned to the personal retinue of the King himself and even became one of the monarch’s favourites. Iain always struck me as a charming, dashing character; noble and brave and true. And, readers know that he, like Murdo and David, is gay, in a time when it was very challenging for two men in love to have a HEA.

Unnatural is Iain’s story and charts the stormy course of his relationship with boyhood friend, James Hart. While it is not necessary to have read the Enlightenment trilogy to enjoy Unnatural, I found it helped because, for a lot of the book, I felt that Iain was not particularly brave and true. Having the earlier picture in my mind helped me to be more sympathetic to him as he takes a really long time to figure out what is in front of his eyes all along. (More about this later.)

The story is told  mostly in vignettes and episodes, “then” and “now”, with the past stories moving forward until the narrative joins the “present day” (1824) action. It both worked for me and didn’t. Because it wasn’t a linear story, I found myself, particularly with the 1824 scenes, wanting to stay with one particular timeline rather than moving about. However, it did show that Iain and James have a long history, a deep affection and affinity, as well as sexual attraction (even if the latter is more often denied than not).  Taken on it’s own, the 1824 storyline could be seen as a little thin; the flashbacks are what give the novel its emotional substance.

The words didn’t always flow well for me when I read. Some of the phrasing occasionally felt a little clumsy but that might be a function of me having an early copy; the final published version may be cleaner than what I read.

It struck me, as I was reading the last section of the book, where the story pulls all the threads together, that despite Iain having the heroic reputation, it is James who is the more brave of the two in important ways. James puts his heart on the line and asks for what he wants. He doesn’t let pride stand in the way and he’s more open to viewing their (potential) relationship as something which might be successfully (if carefully) managed.  In contrast, what holds Iain back is fear and pride. Even so, it is Iain who can’t stay away. James doesn’t make a habit of begging for Iain’s affection and, it is James who eventually takes a stand of his own. He is not a pushover for Iain. His quiet dignity and self-possession struck me as two of his greatest qualities. For a while, it was easy to see what Iain saw in James but a little more challenging to see what James saw in Iain.

Of course, Iain has good reason to be fearful and appearances are important not just to him but also to his family. I don’t mean to be harsh. Today coming is still often a fraught experience for LGBTQ people and it was (in Western society at least) even more difficult in Regency times when sodomy was a crime. Just when I was thinking a little dourly of Iain and wondering why James put up with it all, you reminded me of something very important. After the drowning death of his oldest brother, Tom (Iain, then 10, was present but unable to save him), due to Iain’s own misplaced guilt and the ill-placed grief of Iain’s father, Iain felt he needed to be the perfect son. The expectations on him from his father were twice (if not more) as great. Daddy Sinclair had thrashed a teen Iain for fooling around with the second footman and it was impressed upon him (literally) the consequences of ever allowing himself to be caught in such an indiscretion in the future. These complicated family dynamics and expecations were ingrained from such a young age – I’m not surprised it took him twenty years to finally be able to put it aside and live for himself.

In fact, there is a contrast between James’ upbringing and Iain’s. James’ parents were happy together and James had a good relationship with both of them. In Iain’s family, it was the opposite and I thought you showed how those things can (but not always actually do) make a big difference without making a specific point about it. I also think you celebrated quiet bravery, both with James and with Iain’s mother, who had raised children and managed an estate while her husband became an angry, sullen, alcoholic.

I would have liked a little more about how James and Iain were going to manage their HEA in a practical sense. I was less convinced by it than I was of Murdo’s and David’s setup. It’s not that I didn’t believe in the relationship; I did. But I would have liked to see some of how Iain and James were going to go along on a day to day basis. And, while I 99% believed that Iain would hold true to his promise, I think I’d still have liked to have seen him actually stand against some opposition or threat for me to completely buy it.

James, like his father before him, is a naturalist. He has a special interest in plants and insects which can mimic other creatures or have special camouflage so

“…it makes a place for itself in its world that is safe, right out in the open.”

It wasn’t just the the case that this was used as a kind of foreshadowing of a possible future for the couple, but I think it went a little deeper than that – I think that’s where James got his inspiration and steadiness from. I also liked that he received, from his naturalist studies, comfort that his sexual orientation (not that he referred to it as such of course) was not unnatural and he was as deserving of love and happiness as any other.

When it comes to everyone else, Iain is the hero but in their relationship, it is James who gives courage to Iain and inspires him to go after what he really wants, rather than what people expect or demand of him.  I liked the sympatico between the two men very much. Grade: B-