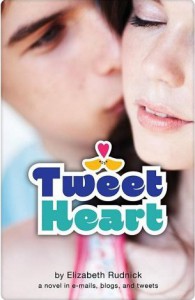 Social media is probably one of the funnest tropes that’s present in young-adult fiction.   How often do you see a regular adult novel belting out blog posts, emails, and IM’s in a way that tells a full fledged story?   Not very often.   Books that use social media have always been fun reads for me.   Some, like the TTYL series by Lauren Myracle, have become long-time favorites, while others like Heart on My Sleeve by Ellen Wittlinger fell flat.   Tweet Heart is a comfortable, in-the-middle type of novel that may not live up to the success of authors like Lauren Myracle, but provides a quick, entertaining read all the same.

Claire has just joined Twitter, the newest social media fad to hit high school, and is making the most of it.   Her BFF Lottie is coaching her through her major crush, hot lacrosse player JD, while trying to find the guy of her dreams as well.   Claire’s best guy friend, Will, is trying to find the courage to ask her out, but her crush on JD is making things a lot harder than they should be.   And Bennett, her other male comrade, is just trying to get attention from the opposite sex.   Being a Sci-Fi geek who knows Klingon and Elvish can put a damper on one’s social life.

Things are shaky but constant, until Will decides to hatch a plan.   JD doesn’t have a Twitter account, and Claire is desperate to talk to him – why not make a fake name, pose as JD, and make her happy?   Bennett convinces him it would be a good idea, but only once.   After that, no more speaking, comfort Claire, and maybe move past that dreaded title of friend into something more.   Nothing could go wrong – could it?

Talking to her once as JD was fine, but Claire was so happy and eager, Will just couldn’t stop at once.   Before he knows it, Claire’s feelings for JD have only grown stronger.   Now that school is back in, Claire, Will, and Bennett are working together on the school paper, and all they end up talking about is that jock JD.   Will can barely get a break, and Claire is too excited to think straight.

Tweets, blog posts, emails, and advice column segments make up this novel of misplaced affections and high school drama.   These four friends go through everything to discover that the person you like isn’t always so great after all.

Reviewing a book that uses social media is really difficult because I can’t talk about description or action or many other things that regular narratives have.   Social media requires strong characters and dialogue to make up for a lot of those aspects, and you have both hits and misses with them.

Claire and Will are a nice young-adult couple.   Claire’s Get Clueless column segments were really amusing, and were some of my favorite parts of the book.   I liked that she rode horseback and read, all of which made for a pretty well-rounded heroine that remained grounded when it came to things other than her crush JD.   Will was a nice fit for her, and his occasional bouts of geekiness made him really appealing, though his overall personality wasn’t anything that I got excited about – not to mention I would have liked him to quite the act of playing JD sooner.

Lottie and Bennett were my favorite of the two couples.   While it’s rather cliche to have the secondary characters get together as well, they added   interesting spice to the story.   Lottie’s constant boy troubles were always amusing and good for a few laughs, as was Bennett’s constant references to the geek world.   They brought some needed color to the book and it’s plot, and by comparison made Claire and Will’s troubles a lot easier to swallow.   Bennett’s blog posts in particular were funny, and I liked that he wasn’t the typical guy friend and egging Will on to continue the charade.   Having him be sensible and thinking of Claire, whose friendship means just as much to him, was nice, and broke from the bro-code mold some authors put on their heroes and their close friends.

Dialogue between all four of the characters was usually really witty and real.   You really know how to make your characters feel like high-schoolers instead of the usual mature, twenty something character type in a teenage skin that YA has a tendency to show.   This example   of a Tweet conversation between Lottie and Bennett is one of my favorites:

LotsOLove @KingOfSlack:   Hey dork – I know.   Was quoting a song which you would know if you listened to anything but Lord of the Rings soundtrack.

LotsOLove @KingOfSlack:   Say what?   Are you throwing crazy made-up languages at me again?

KingOfSlack @LotsOLove:   Glad u don’t speak Elvish.   U don’t want to know what I just called u.

LotsOLove @KingOfSlack:   I cannot understand why Claire hangs out with you.

The plot was nothing to really get excited about.   I’ve seen it done before to various degrees, and it was a pretty average take on high school relationships.   The social media format was really well done, however, and between the Tweets and the emails, I felt like the story seemed really fresh.   Other than a few minor things to figure out slang-wise, everything was really easy to read, and made for a good book to finish in a few hours.

While the plot doesn’t market itself as anything original or groundbreaking, Tweet Heart‘s use of various social media conventions like Twitter and Email makes for a fun story and read.   Coupled with witty dialogue and a fun cast of secondary characters, I am really anxious to see where you go next, especially if your next novel is in this same format.   B-