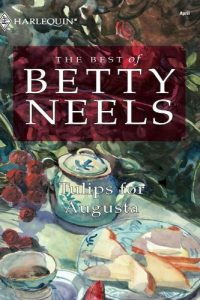 A CHARMING PURSUIT OF HEARTS AND FLOWERS

What a maddening, impossible man Constantijn van Lindemann is! Wherever Augusta goes, there he is—inviting her out, paying her compliments, sending her enormous bouquets of tulips, even kissing her on occasion. Augusta must admit she does enjoy it, especially the kisses. But until she discovers how important a role the glamorous Susan plays in Constantijn’s life, how can she possibly take him seriously?

I mentioned to a friend that I was feeling overwhelmed and slightly depressed by all the bad news lately. Fires to the left of me and hurricanes to the right (here I am stuck in the middle with you) plus assorted other worrying things. She suggested I dive into a comfort read. Though “Tulips for Augusta” is not a book I’ve read before, it comes highly recommended. And it’s by Betty – so I think I know what’s going to happen!

Young Staff Nurse Augusta Brown is getting her training and experience in one of those humongous old, “it’s been built onto with miles of criss crossing corridors” hospitals. Right now our girl isn’t best pleased as she’s being pulled from a men’s surgical ward (where she’s happy) to the private ward where rich people (sick and not actually so sick) have the money to (they often think) be waited on hand and foot by the nursing staff. Staff Nurse Brown, young though she is, is well able to cut through their verbal crap and complaining including Lady Belway (who is well enough to aristocratically whinge to Matron about the lack of pepper on her cucumber sandwiches). As I said, some of them are not really as sick as they think.

Augusta – who has aged out of childhood plumpness but has curves in the right places, splendid teeth (yes, really), and coppery hair – even gets along with the peppery Brigadier. But it’s the tall, imposing, quiet man she meets in Lady Belway’s room who gets her attention. Who is this man? And the beautiful young woman often there as well whose stylish wardrobe the nursing staff sighs over? Strangely he appears to know the rhythms of hospital life including nursing report time and walks along with Augusta down the lengthy corridors asking about the junior house surgeon he’s seen her with. Then the tulips arrive.

But Augusta will soon be taking a holiday – first to visit her family in rural England – and then to Holland to see a pair of ancient aunts and brush up on her Dutch. Lady Belway has been discharged so Augusta is resigned to never knowing who He is. Until suddenly he’s in her life again –

“I knew your voice,” he said, speaking English for the first time that night.
“But I was speaking Dutch.”
She saw the twitch come and go. “My dear girl, I should know your voice anywhere, in whatever language you chose to speak—which reminds me, I must give you some lessons on Dutch verbs. You had them in a hopeless tangle!”

– and asking about a young (and insufferable) Dutch man the aunts tried to set Augusta up with. And kissing her and sending more tulips. Augusta knows she’s no model but he says the oddest things to her. Then treats her with a mannered but slightly bossy civility that infuriates her because honestly, what can you do in the face of that? Well let him drive you around Holland, take you to his generations old house filled with antique furniture and a requisite Old Family Retainer and go window shopping with you even though he agrees that most men hate to do that. What the infuriating man won’t do is answer the questions about himself that Augusta most wants to know about and has the nerve (the nerve!) to say that she’s probably tied her thoughts into a dozen knots that no man could hope to untangle. For such a smart man (he’s got degrees from Cambridge and Leiden) he can sure be obtuse at times. But of course he’s not going to give up as we can all see that he’s madly in love with Augusta and has been since he met her. That makes his maneuvering and continuous popping up in Augusta’s life okay. Even if I want to smack him for not telling her something she needs to know despite her sorta asking about it several times. But La Neels has to keep this pair at odds and worried until The End.

So what do I like? Augusta isn’t a pushover either personally or professionally. She can easily put a snotty Dutch photographer in his place when he dares to comment on her wearing a midi dress. Augusta can also maintain a fairly breezy attitude with Constantijn van Lindemann – well, fairly breezy though he appears to be able to see through a lot of her breeze. Gussie is hardworking, competent, and definitely the nurse you want on hand when fit hits the shan. Whether you’re Timmy in the well with your labrador or there’s a mass casualty flooding your hospital with patients, Augusta’s got your back. Yet she’s also got some lingering self image issues from back in the day when her brother (as brothers will) called her “Roly” due to her weight. Also, she can tell that Constantijn is much wealthier than she is.

Constantijn is a Neel’s Dutch Doctor who makes no bones about the fact that he’s madly in love with his heroine. His means may be subtle – no kiss cam for him even if it existed then –  but he pays careful attention to what Augusta says (and tracks down the frankly awful sounding tat that she missed out on from the white elephant stall at the vicarage rummage sale). Her parents and brother like him, too. He’s kind, considerate of his patients, makes house calls, and (like many Neel’s Dutch Doctors) must live on No Doz given how much he can cram into a day.

What drives me nuts is the conflict that he refuses to answer Augusta’s many questions about. Once I knew what it was, I could see that he wouldn’t want this made public for the sake of other people involved but would it have killed him to tell her “Darling, trust me. This woman means nothing to me romantically, I’m trying to straighten out her mess, and once this is past, we’ll live happily ever after in my gorgeous old house in Holland and I’ll get your Dutch verbs untangled.” No, no it wouldn’t. Instead he deflected so many times and seemed to dismiss her concerns so many times (if your darling asks you about another woman that many times, reassure her) that Augusta’s self doubt reared its ugly head. And yes, maybe Augusta needed to have a “fine” argument with him, rather than acting as if everything was wonderful, to get her fears across but sheesh buddy, in the future – talk to her. B-