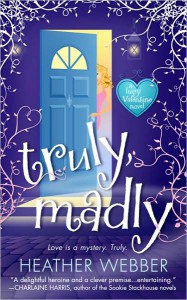 This is a cute mystery which I think readers of the “old” chick lit mysteries would enjoy. Like the chick lit books of old, this is told in the first person and features a heroine who is learning to be more sure of herself.

Lucy Valentine is the last in a long line of matchmakers who can read auras of people and using that ability matches people together. But unfortunately Lucy does not have that psychic ability. In an electrical accident when Lucy was fourteen, that skill was “zapped right out of [her]” and it was replaced with a different kind of ability. Lucy finds lost items.

Despite being legendary matchmakers, Lucy’s family has never been very lucky in love. They call this the Cupid’s curse because her family has the inability to stay happily wed. Lucy’s father got caught with another woman who was not Lucy’s mother. The truth is that Lucy’s father and her mother are quite content with their separation but who trusts a matchmaker who is not with his purported one true love. Lucy’s father leaves Boston to hide while the scandal dies down. In the meantime, Lucy is charged with manning the matchmaking agency. Lucy’s father leaves her color coded files to help her match up the clients while he is gone. It is supposed to be simple, painless.

Lucy’s first client is Peter who hasn’t been able to get over his first love, Jennifer. Peter is filled with regret. After a fight with Jennifer, he got very drunk and woke up in bed with one of Jennifer’s nemesis. He tried to apologize to Jennifer, but she refused to see him and her family wouldn’t let him near her. Peter is ready to move on after six years of regrets. Lucy is moved to try to track Jennifer down, to tell her how badly Peter feels about their breakup. When they shake hands as he is leaving, Lucy gets a vision of a skeleton’s hand with a diamond ring and she begins to wonder about Jennifer and her client.

Upstairs is a PI firm and Sean Donahue is filling in for his brother. Lucy asks Sean to find Jennifer. Upon touching Sean, she sees a vision, not of the past, but of the future, of the two of them naked and in bed with each other. Problem is that Sean is still living with his ex-fiancee and seemingly still attached to said ex. Sean admits that he and Cara, the ex, are in the process of decoupling.

The romance that develops between Lucy and Sean is very slow, snail like for romance readers, but probably more believable. This is the first in the series and a slow building romance is easier to maintain over a series than one that is more settled. Of course, we readers don’t know where this will take us. Authors like Charlaine Harris have readers buy into relationships only to kill off the lover and/or spouse. Not that I am bitter about it or anything.

One problem is that it seems like Lucy’s “finding” abilities really weren’t well exercised before the start of the story. For example, Lucy becomes caught up in the search for a missing boy and she is moved to break her family’s code of silence to lend her abilities to the search. Why wouldn’t she have done that before? When she touches Sean, she sees a vision of the future for the first time. Why? There is no concrete period of time given for how long Lucy has had these abilities, only that they’ve not been tested or used a great deal. Lucy is also one of those storybook trust fund kids who lives totally frugally and doesn’t ever tap her trust fund.

Lucy’s attempts to find Jennifer, locate the boy, and run her father’s matchmaking agency get her in trouble more often than not. She doesn’t need Sean to bail her out, but she does have to confront the law on several occasions. As I said at the outset, this was a cute mystery, somewhat in the vein of the chick lit books because Lucy is trying to find herself after several failed and miserable attempts to hold down a job or a relationship. I’m up for the next book in the series. B-

(affiliate link) and Barnes and Noble (affiliate link) or other etailers. There is no ebook version that appears to be available. SMP is the publisher, a division of Macmillan.