Why hello there. I had no idea you wrote such fun and entertaining characters.  I admit that I was initially put off by the series because it featured heroines with psychic abilities.  While Now You See Her and Dream Man by Linda Howard are two of my favorite contemporaries, psychic characters have always seemed a bit twee to me and I’ve never fully climbed on board with that type of paranormal.  I particularly disliked the use of pyschic abilities in romantic suspense, in part because I think the psychic part reduces the suspense part and raises all kinds of questions. 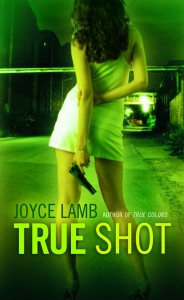 This is my long involved excuse as to why I passed you over before.  But True Shot has a lot of those different elements in the strong female protagonist and the less than alpha male protagonist. At it’s core, True Shot is a adventure road romance wherein the two flee for their lives while searching for answers which are primarily presented in a series of sort flashbacks as Sam West recovers her memories.

Mac Hunter is a newspaper journalist and good friends with the Trudeau sisters. He’s headed for burnout and they convince him to go to the family cabin in the Shenandoahs. Admittedly for someone seemingly at the end of his tether (a self medicating drunk teetering on the edge of alcoholism), Mac is shockingly put together such that the actual despair that drove him to the retreat seemed a bit artificial. Hard bitten reporter he is not.

And there are plot gaps throughout the story but much of that is forgiven by me because it’s rare to read about an awesome spy and the sidekick where the awesome spy is a woman:

She nodded but made no move to open her door.

“Maybe it’s stupid, but I hope that whatever we learn in there doesn’t change . . .” She shook her head with a soft laugh.

“Nothing. It’s foolish to think there’s anything even to change.”

“You mean, between us?” he asked, surprised. And hopeful.

His point exactly. “Well, I am your only friend right now. It’s like you’re Jason Bourne and I’m . . . I guess I’d be the . . . well, the resourceful girlfriend who gets killed at the beginning of the second movie. Hmm, not sure I care for that comparison on a couple of levels.”

The biggest problem with True Shot is that you actually see Sam, the super agent heroine, being super only in the beginning because she’s injured and then suffers a memory loss.  Her weakened state allows Mac to show himself as capable while he whips out one self deprecating quip after another. There are additional plot holes such as Sam having multiple epiphanies about her time with the agency and how she got to be there in the first place and learning about the awesomeness that is Mac by seeing some of his memories. The reunion aspect with her sisters is largely glossed over and the ending is treacly where all wrongs are forgiven.

Even so, I still appreciated the portrayal of a strong and capable heroine who was dangerous even while she was injured. I thought the suspense portion of the story was fairly well done and that the villain of the story had a sympathetic storyline. The chemistry of Mac and Sam was immediate but not inappropriate and I liked that the two didn’t fall into each other’s arms at the first moment that they were alone.

The wry humor from Mac provided moments of lightness during the race forward. I don’t know what happened in previous novels, whether there was a build up of a story arc and I was just now seeing the pay off but there is no cliffhanger ending for the series arc. The book was fairly well self contained and the secrets that Sam kept were all revealed. Part of the reason, I think, that the secrets were all spilled out in one book despite the storyline being encompassing was the use of the Sam flashback memory scenes. A lot of information was dumped in small tidbits throughout. It worked but I can see that this shortcut would be irritating. I was still pleasantly entertained and I’ll seek out other books by you in the future. B-