The following are reviews for three novellas written by Thea Harrison, published by Samhain, and set in her Elder Races world.  While I understand that men on the cover sell better, the stories are almost all focused on the female characters. Finally, a common thread throughout the three books is the strangeness of the Wyr. Alice is a chameleon.  Claudia is a former military part Other.  Seremela is a medusa, with a head full of snakes. I like that Harrison is taking chances, even small ones, in these novellas.  However, these are fairly short and their appeal to readers outside the Elder Race fan base may be limited.  As a spoiler, I’ll tell you that “Natural Evil” is my favorite of the three. 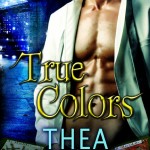 Gideon Riehl and Alice Clark separately notice a pattern of Wyrs being killed in some sort of sacrificial manner with the organs of the abdominal cavity being spread out “like stars in a dark constellation.”  Alice is a schoolteacher and Riehl is the once roaming former captain of Dragos’ army, now recently domesticated detective in the Wyr Division of Violent Crime.  The novella clocks in at under 27,000 words but you get a good sense of Alice (quiet and unassuming but smart) and Riehl (violent, alpha male, protective).  Their speech cadences and thought patterns are different helping to make the two seem distinct.  Riehl, however, is cut from the same alpha cloth as other Harrison males.  The short works, in part, because it relies on the reader’s experience with alpha males, quiet females, and mate bonds. Mix in a decent mystery and the result is a solid, readable novella.  It isn’t ground shaking but it is good.

He was faster in his wolf form, and he could run literally for days. But if he changed into the wolf, he couldn’t speak unless they were close enough for telepathy, and he could already taste her panic on the wind. Besides, NYC might be the seat of the Wyr demesne, but it was also home to millions of others as well. He didn’t trust how people might react to the sight of a two-hundred pound wolf hurtling down a city street.

He took a deep breath and bellowed, “NYPD! Stop!”

Of course she didn’t stop. He wouldn’t have stopped either just because some dumbass stranger yelled at him. Damn it, was she headed for the subway?

She was. In a move that was so suicidal it took his breath away, she plunged almost directly under the wheels of an oncoming truck as she raced across a street. Riehl didn’t think the driver even saw her because the truck never slowed.

Riehl had no choice but to pull up for a few vital moments, which gave her an even greater lead. After the truck he kicked it up, kicked it as a hard as he could. He blazed down the sidewalk like a heat-seeking missile, scattering pedestrians in his wake like so many squawking chickens. All other noise faded into the distance. He listened to the sounds of his breathing, the sharp wind whistling in his ears. At the subway station, he didn’t bother with taking the stairs at a run. Instead he gathered himself and spanned the flight in one massive leap, but it wasn’t enough.

Several yards ahead, the woman darted across the station platform and onto a train just as the doors closed. It was like something out of a goddamn made-for-TV movie. Unbelievable. Riehl spat out a curse as he came up to the closed doors.

They stared at each other through the barrier. The woman was panting and her eyes were dilated black in a face that was chalky white except for two hectic flags of color in her cheeks. 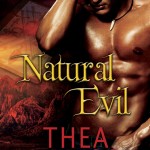 Claudia Hunter has power enough to be Other but she is no Wyr.  When she comes across the body of a large dog on the side of the road, she feels compelled to stop and help it.  This brings her to the next town, Nirvana, Nevada.  Claudia seeks out the help of a veterinarian who offers her housing in the form of a trailer at the back of the vet’s property.  Both the vet and Claudia recognize that the beating and abandonment of the Wyr dog has more meaning that what is obvious and suggest a darker side of the small town known as Nirvana. Luis Alvaraz is the Wyr shifter and he was sent to investigate the  Nirvana Silver Mining Company.  His discovery leads to his being beaten and left for dead.

Claudia is a loner by choice and circumstance.  She has been alone for so long that her attraction to Luis catches her off guard.  Luis is less concerned about his attraction to Claudia and he sets out to prove that while he is much younger than her, they are well suited.  This is a gender flip/role reversal with Claudia being the older, closed off, wounded military heroine and Luis being the younger, more resilient, more hopeful hero.  Of course, that is why I loved it.  The ending is a bit ambiguous but you leave the story believing that Luis’ indomitable spirit will win Claudia over, eventually.

She found Luis lounging against the wall in the sunshine, a duffle bag at his feet. He wore scuffed boots, faded jeans, a gray t-shirt, his black leather jacket and a scowl. She looked at his strong, graceful neck, where his satin-brown skin disappeared under his shirt, and she wanted to bite him again, to claw at that perfection while she took him into her body. Surely the gods had not been fair when they’d made that man so damn beautiful. She dragged her gaze away and squinted at the early morning sun.

“What are you doing here, Precious?”

Luis said, “I’m not done having sex with you yet. 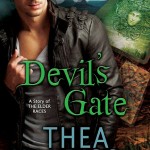 This story is set after Book 3 and the novella, Natural Evil.  The female protagonist is Seremela Telemar, a coroner and a medusa.  Her irresponsible niece, Vetta, runs off to Devil’s Gate.  Devil’s Gate is a town that has sprung up after a gate to the otherworld is discovered open. It’s like a gold rush town and the only law is the one that coin buys.  Seremela needs assistance which provides Vampyre Duncan Turner the perfect opportunity to show Seremela his interest and what he can offer her as a mate. Vetta has been accused of murdering someone and is set to hang the following morning.  Seremela seems to be written as a reserved, almost shy woman, apposite of the stereotypical Medusa.  Her snakes are sentient beings who seem to have a mind of their own. I was both repulsed and fascinated by them.  Harrison does attempt to make the snakes palatable through the point of view of Duncan who eroticizes the snakes and the potential bites they could leave over his body.  In a strange way, I was somewhat disappointed that the snakes didn’t play a bigger role in the lovemaking when they were such an important part of Seremela’s life.  Given my aversion to snakes in general, I would have to say that Harrison’s writing skill is strong as I ended up liking the story much more than I had anticipated.  C