The spirit of the Western is infused by the warmth of community in this pro sisterhood story of a romance between a spinster librarian and a wealthy Texas businessman whose spirit has been broken. I couldn’t decide if this book was subversive or trying to reinforce traditional mores of female and male behavior. 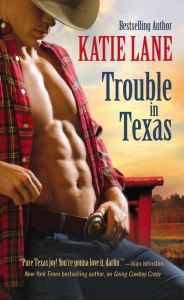 Branston William Cates is the oldest of the five surviving Cates siblings. He and his brother had planned on shutting down Dalton Oil, the company that keeps the town of Bramble alive. In a previous book, Billy Cates’ plans were foiled when he fell for Shirley and Branston is traveling to Bramble to attend the wedding between the two.

He takes a detour to Miss Hattie’s Henhouse, a notorious house of ill repute. His great grandfather died there and Branston half believes that the house and his grandfather’s death is responsible for the Cates’ curse. It took the life of his oldest brother, Brant’s wife and small child in a tornado, and his youngest brother is in remission from cancer. Brant’s not normally superstitious but he can’t find anything else to blame:

But if he didn’t have the curse to blame for the huge emptiness that his family’s death had created inside him, then what could he blame? There was nothing he could do about fate. And if he blamed God and renounced all faith, then he couldn’t believe in heaven. And without heaven, his wife and son would just be decaying in the hard, cold ground.

Brant’s attempt to infiltrate Hattie’s whorehouse is intercepted by three of the “hens.” Minnie, Baby, and Sunshine, are still living in Hattie’s house of ill repute that now is owned by Elizabeth Murphy, the Bramble town librarian. At the age of thirty-seven, Elizabeth is a content spinster. She’s also a virgin. (Why isn’t well explained. Nor is it explained why Brant, who misses the wedding, doesn’t immediately proceed to his brother’s new home to explain himself). Elizabeth has been raised by a “man hater” who grew up in Hattie’s henhouse when it was a working brothel. Elizabeth’s mother experience as a child and post the henhouse has led her to teach Elizabeth that men are dangerous, awful creatures. Elizabeth doesn’t exhibit any real animosity toward men in her life, more exasperation.

But her virginal status is put to the test when she encounters Brant. Minnie and her hens try to get Elizabeth in touch with her “henness” which I wasn’t sure was femininity or inner strength. Much is made of Elizabeth’s dowdy clothes and spinster status. Minnie believes that Elizabeth needs to shed more than just the prim suits and instead embrace the heritage Elizabeth has as the great granddaughter of Hattie Ladue.

The underlying message for all the characters is that life is brief and that it is better and braver to try to embrace it than to close one’s self off to avoid pain and loss. Elizabeth’s mother tried the latter course of action, eschewing men and trying to teach Elizabeth that men are the root of all evil.  Each of the hens teach Elizabeth a slightly different, more nuanced story. Some men can be evil and some can be wonderful.  The key is finding and holding on to the wonderful ones.

Brant’s love for his family, his heartache and concern over his brother, and his fear and desire for love in his life were tangible.  He and Elizabeth both have to learn to take a chance on each other and on love itself.  For all its hokey title and man titty cover, there’s a pretty good story taking place inside this book.  I did feel the “hen” part of the story was overly melodramatic and unrealistic, exaggerated for the sake of fiction with the three old ladies acting out the fan dance and partaking of liquor parties in a basement room modeled so that Austin Powers would feel at home. However, I’ll definitely be on the look out for more Katie Lane.  B-

→ Jane
Previous article: REVIEW: When in Paris by Beverley Kendall
Next Post: Daily Deals: Freebie, a YA, and two interesting historicals