REVIEW: Trade Me by Courtney Milan 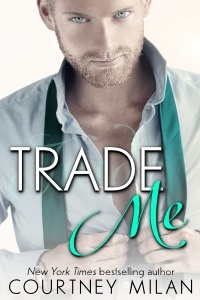 It cracked me up to read the GoodReads comments of people who are waiting for this, because most of them follow exactly my own thought processes: “New Courtney Milan, yay! Billionaire hero New Adult novel…. err…” I don’t think most of those readers will be sorry they followed a favorite author into a new genre, because this is definitely billionaire hero Milan style.

You might think from the set-up — a wealthy student switches lives with a struggling one — that this will be a story filled with adversarial sexual tension and comic misadventures, but it defies expectations at almost every turn. Blake Reynold’s reasons for offering the trade have nothing to do with teaching Tina Chen a lesson about how hard his privileged life really is: he is trying to escape that life as literally as he can. And although the book is often very funny, only a little of the humor comes from watching the two adjust to their new lives, which we actually barely see. The real focus of the story is on relationships: Blake’s fear of disappointing his much loved, exceptionally successful father, Tina’s feeling of responsibility towards her family, and Blake and Tina’s growing feelings for each other — which Tina is sure could only end in disaster for her.

“I don’t know why anyone thinks that looking at the stars is so romantic,” she says. “Have they ever read Greek mythology? It’s all the same story–God sees mortal, God desires mortal, mortal suffers gruesome fate and is rewarded with an eternity of pain in the cosmos.”

Both characters have unexpected backstories. Tina’s family immigrated from China when she was young, because her father was tortured for practicing Falun Gong. Now her mother devotes herself to helping other immigrants — even if the electricity bill doesn’t get paid, or Tina’s younger sister doesn’t get her ADHD meds.

I hate trying to explain Falun Gong to Westerners. Sometimes, I wish my parents had been caught up in something comprehensible, like tax reform or Tiananmen Square. I’ve tried telling people before and it rarely goes well… No, it’s not a freedom of speech issue. No, it’s not a religion, not like you understand it. It’s never going to make sense to you, which is why immigration judges don’t always get it. It’s like free exercise of… exercise, and my mother spends all her spare time beating her head against that wall.

Blake’s issue is also a rare and intriguing one for a hero in New Adult. I’m putting it in spoiler space since it’s revealed slowly, but since it’s not that hard to guess, it’s really only a mild spoiler:

Blake has an eating disorder. It’s not about weight or appearance: food has taken on unpleasant psychological associations for him, and he tends to over-exercise instead of eating.

And though Blake may be a billionaire — his father runs a company much like Apple, and he’s been appearing in commercials for it since he was a toddler — he’s also a Courtney Milan hero, i.e., the opposite of an alpha jerk. He genuinely cares about Tina, and he hears and supports her feelings rather than trying to persuade her or “rescue” her.

Part of what I enjoyed about the book were little details that just feel right. In one funny scene, Blake and his father find their experimental technologies believably clashing. The depiction of Tina’s poverty is spot on, as is her experience as an older student in a class full of freshmen, heatedly discussing issues they have no practical knowledge of. I don’t know how accurate the depiction of life for Blake and his father, Adam, is, but it never struck a false chord. I really enjoyed their interactions, and Blake’s fond understanding of his seemingly difficult dad:

What new fucking rancid bullshit is this? If you are blowing me off for some new-wave meditative retreat shit, I swear to God there will be a nuclear explosion down here.

People think that my dad is an asshole because he says shit like this all the time and they think he means it. He doesn’t. He’s not really an asshole. He’s just fluent in the language of asshole and likes using it.

If I had to choose one word for the story, it would be loving. Both Blake and Tina are very loving people, though her caring nature has been somewhat warped by bitterness and fear. What she and Blake give each other isn’t about money, but about moving past their fears.

The story was working great for me until the last quarter, in which suddenly a lot of unexpected and melodramatic events gave me a “meanwhile, in another movie” feeling. Although the plot turns do fit the overall themes, I found them so jarring that they inevitably affected my feeling about the book, and my grade.

The romance ends with a somewhat in-the-air happy for now. The next book will follow Tina’s best friend Maria Lopez (a trans heroine in New Adult, how exciting is that?!) and the third promises to catch up with Tina and Blake again, as well as with the foul-mouthed and opinionated Adam. I’ll definitely be reading the rest of this innovative series. B-

→ Willaful
Previous article: Tuesday News: Female road novels, the problem of ‘reliability,’ editors speak, and Tinder’s experiment
Next Post: Wednesday News: Three posts about the future of books and one honoring an American artist and activist