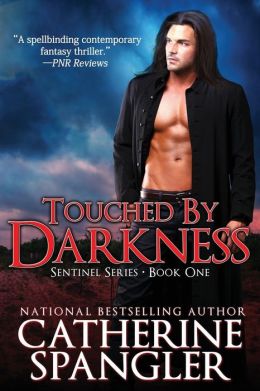 This is the first book in he Sentinel series and I picked it up on the recommendation of Has Bookpushers. To be precise Has recommended her upcoming release but I was impatient to try a new to me paranormal author. Touched by Darkness is reminiscent of older paranormals but in a good way. The emphasis was on world building and the romance was a slow burn.
After her husband dies a violent death, Kara moved her son to a small town of Zorro, Texas, where she set up shop as the local medical doctor. When she senses a flare of power in her new hometown, she contemplates running again, not only because she doesn’t want to suffer another loss at the hands of a supernatural creature but because her son exhibits the same powers her husband does and she fears for his life.
In Touched, the primary parties are all in on the secret. Kara is a human conductor and her deceased husband was a Sentinel. Sentinels are reincarnated Antlatean souls who have been reborn in the current time to fight the Belians.
Belians, of course, worship darkness and rely on human sacrifice to increase their power. Like the Sentinels, they can be reincarnated or they can possess the bodies of humans weakened by physical or mental disease. A powerful Belian brings Declan to Zorro, Texas, and he is both surprised and glad to have found Kara.
Conductors help to focus the seeking power of the Sentinel. Together the two form a nearly unbeatable combination in tracking down Belians. Sex between the two provides the sharpest focus. (As an aside, you’d think an orgy of Sentinels and Conductors would result in the best Belian posse ever, right?) When Declan and Kara meet, the last thing that Kara wants to do is have sex with a stranger. Declan, of course, is up for it because he views sex as a mere physical act. For Kara, sex, love, and conducting are inextricably intertwined because the only time she served as a conductor was for her deceased husband.
With a Belian stalking the people of Zorro, threatening her son, and threatening to wreak further havoc, eventually Kara feels selfish for not having sex with Declan. What’s well done is that Declan never guilts Kara into sleeping with him and tries hard told deny his own physical urges. (He actually does this so well that Kara believes he’s unaffected by their connection).
Through a series of visions, Kara and Declan find clues to who the Belian is possessing. First that s/he may live along the river and then what kind of vehicle the person may drive. With each clue, we are presented with a varying set of individuals who might be their nemesis.
At one point, Declan suggests that fate or the Universe has much more influence than any individual which seemed a bit sanguine for such a single minded man. Further, because Sentinel souls reincarnate, I wondered a bit about Richard’s soul and whether it was seeking Kara.
The real drawback is the romance. The slow burn was almost too slow and for much of the book Kara is tormented by the death of her husband, the first Sentinel that she had. There wasn’t enough text devoted to showing her moving past Richard’s death and her later declarations of love rang hollow. Declan himself was a cold man and approached sex as an enjoyable tool in his arsenal to fight the Belial. The effort was made to show him caring for not only Kara, but her son, but I never fully bought into the idea that he cared for them in a deep and meaningful way.
It’s not that I couldn’t see something stronger develop down the road but that in the moment of time we readers are permitted to visit the couple, it appeared to be more of a relationship of common experience and goals heightened by a strong physical reaction. The emotional connection, however, was undercooked at the end of the book.
The series has potential, though, and I’d definitely read another Sentinel book. I debated between a B- and C+. The book is described as an Urban Fantasy and from that stand point, I thought it was successful. The love relationship is where I think the book stumbled so I went with the B-.
Best regards,
Jane