I’ve read much of what you’ve written in the past five years. I’ve found quite a few of your contemporaries irresistible: Animal Attraction and The Sweetest Thing were two of my favorite reads in 2011. I’ve been less enthralled with your Harlequin Blaze books; they seem to me to be more formulaic than your longer novels. But, then again, they should be, right? The Blaze series has a formula—I know this because I went and looked it up on the Blaze website.

The Blaze line of red-hot reads is changing the face of Harlequin and creating a continual buzz with readers. The series features sensuous, highly romantic, innovative stories that are sexy in premise and execution. The tone of the books can run from fun and flirtatious to dark and sensual. Writers can push the boundaries in terms of characterization, plot and explicitness. Submissions should have a very contemporary feel — what it’s like to be young and single today. Heroes and heroines should be in their early 20s and up. We want to see an emphasis on the physical relationship developing between the couple: fully described love scenes along with a high level of fantasy, playfulness and eroticism are needed. And don’t forget, secondary characters and subplots contribute to the richness of story and plot action we look for in a successful Blaze novel.

Are you a Cosmo girl at heart? A fan of Sex and the City or Red Shoe Diaries? Or maybe you just have an adventurous spirit. If so, then Blaze is the series for you!

I am not a Cosmo girl at heart—I’m more of a Slate.com adult—and I think that’s why your book, though well-executed and entertaining, left me feeling unsatisfied. 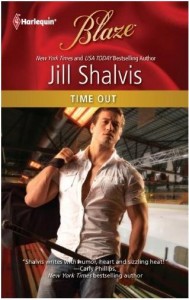 In Time Out, the very masculine, absolutely gorgeous hero with “silky, dark” attractively tousled hair is Mark Diego, the “youngest, baddest, sexiest” head coach in the NHL—he coaches a fictional team, the Sacramento Mammoths. Mark is a typical Harlequin leading man: wealthy, in superb physical shape, authoritative, and utterly self-assured. He’s the kind of guy who only needs to level “a long, hard look” at anyone who challenges him in order for the person to fall quavering back in fear. The Mammoths, who just lost the Stanley Cup finals on a controversial call to their archrivals the (real) Anaheim Ducks, are currently all over the news for a “seedy bar fight”–are there any other kinds of bar fights?–a few of their players instigated against the Ducks. The fight came to an abrupt end when Mark “strode up out of nowhere,” shoved his behaving badly boys out of the bar and into his big black SUV. Mark and the Ducks’ coach have managed to keep their players from being suspended by proposing “a solution that would involve giving back to the fans who’d supported the two teams”: the brawlers will spend their summer doing volunteer labor in their home communities. The Mammoth players will be working in Santa Rey, a working class town devastated by wildfires the previous summer. Mark grew up in Santa Rey and left it as soon as he could, determined to “do something big, something to lift him out of the poverty of his upbringing.”

Now he’s back, driving that big black SUV, and pretty pissed about the whole thing. He’s been working his ass off for the past seven months and really should be on vacation. But no, rather than lounging on a Caribbean beach, a scantily-clad babe on one arm and a drink in the other, he’s stuck babysitting his two youngest players in a low-rent town. There’s an upside, however. The minute he pulls into town, headed to the community center his brother Rick runs—his players are going to coach summer league ball there in the evenings—he runs into Rainey Saunders (she’s the junior sports coordinator of the center), she of the “perfect body,” with whom he shares—big surprise here—a past.

Rainey fell hard for Mark when she was in her teens; he was four years older and the brother of her friend Rick. The night of her 16th birthday, Rainey, wearing a titillating teddy and some borrowed CFM heels, shows up uninvited at Mark’s apartment, determined to confess her love and unload her virginity. Unfortunately for all parties concerned, Mark’s not alone. He is, in fact, slouched in a beanbag chair getting a blowjob from a chick named Melody. (I felt sorry for Melody—Mark is so startled to see Rainey, he sits straight up so fast, “he nearly choked his date.” That can’t have been pleasant.) Rainey runs out—running smack into the door, spraining her ankle, and ends “with her pride and her confidence completely squashed.” The two have occasionally run into each over the past 14 years, but, Rainey, despite the chemistry that “crackles” between them, can’t get over her embarrassment about the past and, every time he expresses “interest in every hard line of his body,” runs away from him.

Now that’s he’s in town for a while and Rainey’s no longer jailbait, Mark’s thinking it’s finally time to nail her. “One look in her fierce blue eyes and he’d felt… something. Not even in the finals had his heart taken such a hard leap.” (I rolled my eyes at this—I saw the Stanley Cup final the year the Hurricanes beat the Oilers; I’ve never seen such crazed people in my life.) Plus, upon meeting her again, he’d pulled her into his arms, hugged her and—and I thought this was a bit forward—bit her ear. That “sexy little startled gasp she’d made” decided him. This time, he’s not letting her ignore him. Mark always plays to win and he’s got 21 days in Santa Rey to win Rainey out of her tight shorts and into his bed.

Mark’s and Rainey’s sex life certainly meets the Blaze criteria in this book. You’ve unquestionably written “fully described love scenes with a high level of fantasy, playfulness, and eroticism.” The first time Mark and Rainey start rounding the bases, they’re in a supply closet; it’s definitely a fantasy the tiny room would be a comfortable place to make out—he’s jamming her back against a “hard, cold steel” shelving unit. The two have lots of pre-consummation playful banter and, when they finally rip off each other’s clothes; the sex is hard and hot and up against a door. Your text is superbly sultry.

She threaded her hands into his hair as he thrust deep inside of her. He made a rough sound of sheer male pleasure, his fingers digging into her soft flesh as she rocked into him. Again he thrust, slowly at first, teasing until she was begging. It was glorious torment, hot and demanding, just like the man kissing her.

They moved together, her breasts brushing his chest, tightening her nipples. She could feel his muscles bunching and flexing with each thrust, sending shock waves of pleasure straight to her core. When she came again, it was with his name on her lips as she pulsed hard around him, over and over again, taking him with her.

A bit later, there’s a fervently ardent shower scene that made me want to find Dr. Feelgood and use up all our hot water. I give you total props for the blazing part of your book. It’s steamy, sweetened by honeyed hot trash talk, and seductive.

You also have appealing subplots about Mark and his father and about the kids at the community center. There’s a fine amount of humor in your tale. Your portrayal of Casey and James, the two Mammoth players doing public works penance, is really funny.  I loved the scene where Mark is first driving them to the dive of a motel the two will be staying in while in Santa Rey.

“So we’re not going to the Biltmore?” James asked. “Cuz there’s always plenty of hot babes there.”

“James,” Mark said, “What did I tell you about hot babes?”

James slumped in his seat. “That if I so much as look at one you’re going to kick my ass.”

“Do you doubt my ability to do so?”

James slouched even further. “No one in their right mind would doubt that, Coach.”

“And anyway, you’re not allowed back at the Biltmore,” Casey reminded James. “That’s where you got caught with that redhead by her husband. You had to jump out the window and sprained your knee and were out for three weeks.”

So what let me down?

It was obvious Mark would seduce Rainey—she’d never really stopped loving him—and once he did, it was just a brief matter of time before he realized she was the one. I never felt the barriers their happily-ever-after faced were substantial. You establish at the beginning of the book she’s still crazy about him, he’s sexually and emotionally drawn to her, and the two are grown-ups.  (The latter, by the way, is a good thing.) Yeah, Mark thinks he’s not ready to settle down but from the moment he sees Rainey again, that’s all he does. It’s not a stunner that by the book’s end the two have professed their undying love to each other.

Mark and Rainey are excessively fictional characters—neither of them seemed as though they’d ever exist in real life. They also were overly familiar–I felt as though I’ve encountered the two countless times in contemporary romance. He’s the powerhouse of guy whom all women want and all men respect. She’s the incredibly sexually responsive, feisty, committed to her do-gooder job babe who, despite sleeping somewhat casually with Mark, is looking for the kind of relationship that leads to marriage and kids. She’s got a mom worried Rainey’s eggs are going to dry up; he’s got a dad who won’t take his charity. Even the debacle of Rainey’s Sweet Sixteen Seduction seemed pat. (And, the almost exact same “barging in on the blow-job” scene happens in Victoria Dahl’s Talk Me Down.)

Your novel’s plot is this: an extraordinarily handsome and magnetic player hero finds (monogamous) joy with a lively, modern heroine. The two have hot sex, but, the sex is a high-speed one way street to true love. And while you’ve done that trope well here, it’s a tired trope.

But, Time Out is a Blaze, not a more complex contemporary. It’s not interestingly innovative or especially enthralling, but it’s enjoyable and competent. As B- books go, it’s not bad. And the sex is smoking. I give it my bathroom wall recommendation: for a good time, pick up Time Out.

→ Dabney
Previous article: DA/SBTB Bestseller List, Week ending February 14, 2012
Next Post: Behind the Scenes of a Connected Series at Harlequin: The Making of the Notorious Wolfes