REVIEW: Thrown for a Curve by Sugar Jamison 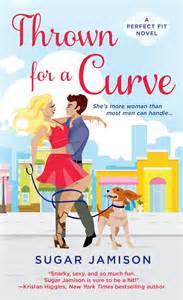 I picked up this book based on a couple of fairly shallow factors: 1) I liked the colorful, poppy cover, which seemed to signal to me that the book fell nicely in the convergence between chick-lit and contemporary romance and 2) your name. Why your name? Well, Sugar (Sugar Beth, to be exact), from Ain’t She Sweet, happens to be one of my favorite Susan Elizabeth Phillips heroines. I think there was an almost subliminal process that happened in my head that went:  sorta-SEP-style-cover+author with SEP-character-name=SEP-type book. What’s weird is that I don’t even always like *SEP* (she’s uneven for me), but still, the association (along with the book blurb) was enough to make me interested in reading this book.

Anyway, the plot: 22-year-old Charlotte “Cherri” Rudy has lived all her life in a small town in New York state. She lives with her grandmother and works in a dress shop with her best friends (one of whom was apparently featured in the first book in this series). She likes her life, but it has its stresses and disappointments. For one, her grandmother, who is the only mother Cherri has ever known (Cherri’s mother took off when she was a child) is getting older and frailer, and having episodes of dementia. Their financial situation isn’t great, and the house they live in is falling down around their ears. Also, Cherri got an advanced degree so she could teach art to children – a longtime dream of hers – but the only job opportunity she’s found is too far away; even if Cherri could commute she’d worry about leaving her grandmother alone for that long each day.

Then there is Cherri’s love life, or lack thereof. She is described as six feet tall with long blond hair and a curvy body. Yet she’s never been on a date and believes she’s fat, unappealing and freakish (due to her height). Yes, Cherri is one of *those* heroines – the clearly hot ones who are somehow convinced that they are hideous.

This aspect of the book annoyed me (it didn’t help that a lot of time was spent on it) – even if you accept Cherri’s self-esteem issues (which are tiresome but at least somewhat realistic), it’s hard to understand why she hasn’t attracted more (or any) male attention in her 22 years. The only thing that might explain it to some degree would be if she were super-shy and dressed in baggy clothes, but neither of those seem to be the case. Cherri actually has a somewhat bubbly, outgoing personality, and as far as I can tell, she dresses pretty much like an average woman her age – she wears dresses, jeans, etc. So I’m not sure how she’s managed to get to the age she has without apparently getting hit on at all.

Colin O’Connell is 34, an Irish immigrant and the best friend of Cherri’s boss’ new husband. He has a thriving business restoring antiques, and like Cherri, he doesn’t have a bad life but he’s not entirely happy. The woman he thought he loved turned out to be faithless, and in the two years since their breakup he’s gone through a period of being a man-whore and now an extended period of celibacy. He was also raised without a mother; the parallel here was a little odd to me, in that it’s never really examined or discussed between Cherri and Colin – do that many people have their mothers run out on them when they are babies and never contact them again? Colin was raised by his father, a feckless, charming skirt-chaser. He’s at the point in his own life when he’s thinking he should consider settling down and starting a family.

Colin and Cherri have known each other for a while (maybe a couple of years?), but, in one of those romance novel conventions that I just have to accept even though it usually doesn’t feel quite real to me, they’ve never admitted their attraction to each other. Cherri’s attraction to Colin is understandable: older guy, handsome, charming, Irish accent – what’s not to love? She’s never done anything about it, though – she believes Colin is out of her league (insert eye-roll here).

Colin finds Cherri’s figure luscious and her personality adorable, but he thinks he’s too old for her and she’s too innocent for him. That, at least, seemed semi-valid to me. He gets drawn deeper into Cherri’s life though when he meets Baba, Cherri’s feisty Ukrainian grandmother, and then later when he utilizes Cherri’s skills as an artist to help restore a piece he’s working on in his shop.

Before long, Cherri and Colin are working together and not-so-secretly lusting after each other. Each still has their issues (Cherri’s: I’m an unattractive freak and someone like Colin couldn’t really want me; Colin’s: she’s too young and innocent and I’ve been burned by love once already), and some of their friends don’t quite approve, but that doesn’t stop the inevitable from happening.

There’s a lot to like about Thrown for a Curve. I liked Cherri (in spite of her tedious self-esteem issues) and Colin. I liked the setting – small towns seem to work better for me when they aren’t rural and/or Southern. The prose style was smooth and readable (which sounds like damning with faint praise but I’m picky about prose so “competent” is really all I ask for or expect).

What didn’t work? The plot, kind of. Which is odd for me, because usually if the prose, characterization and setting are working for me, the plot doesn’t matter that much. In this case, the story started out fine, but got bogged down about halfway through. How many times can we hear about Cherri’s or Colin’s insecurities? Their situation changes, but the script is the same: he doesn’t really want me; she deserves to live her own life and figure out what she really wants. Wah wah wah.

I didn’t have a big problem with the age difference that bothered Colin so much until late in the book. The two fight on a couple of occasions, and Cherri lashes out rather nastily. She has a couple of reasons for being so vicious (to say more would take me into spoiler territory), but her inappropriate anger still felt like it could well be seen as evidence of immaturity.

I think I was supposed to be more charmed by Baba than I actually was. She wasn’t an unlikable character, but she had a pretty broad shtick that consisted of unlikely malaprops and inappropriate vulgarity (her ogling of Colin got old rather fast). The story of her mental decline was poignant, though. The few other secondary characters were likable enough, though my favorite was Baba’s cantankerous dog.

In spite of my criticisms, I think I may seek out the first book in this series when I get a chance. My grade for Thrown for a Curve is a B-.