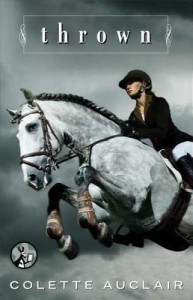 Your book was a Golden Heart finalist at the 2012 RITAs so I felt taking a chance on a new author was less risky than it might otherwise have been. For the most part, I enjoyed Thrown. Although there were some things I disliked,  I’m not sorry I took the plunge. I think you have a lot of natural writing talent and I’m looking forward to where it might take you in the future.

Amanda Vogel is a professional horse trainer and showjumper. Her dream is to represent her country in the equestrian event at the Olympics. However, after seeing her best friend die in a jumping accident, she developed PTSD and was unable to compete. This led to her losing business and she eventually had to sell even her beloved horse, Edelweiss. To get away from her troubles and to make some money, she takes a summer job teaching the young daughters of a Hollywood movie star to ride at his Aspen Creek retreat.  Grady Brunswick is a 35 year old widower, completely out of touch with his daughters, Solstice (11) and Wave (8), and basically clueless when it comes to parenting. He is also a gorgeous action movie star and has women throwing themselves at him everywhere he goes.

Amanda doesn’t make a great first impression – she breaks Grady’s Emmy.  And the children make an equally poor impression on Amanda.  They are spoiled undisciplined brats; they run amok and take no prisoners.

There is an unspoken attraction between Amanda and Grady from the beginning but the romance has a fairly slow build.  I liked this aspect of the story quite a bit.

Amanda begins teaching the girls and, through the discipline she applies with horses (which work quite well on young girls it turns out), Wave and Solstice improve their behaviour and become adorable plot moppets.  The turnaround was fairly quick and I’m not sure I entirely bought the ease with which Grady effectively took direction from Amanda on child rearing.

Celebrity chef and Grady’s best buddy, Harris Stembridge, is the sassy gay friend and fits neatly into the stereotype. There were hints of a life outside helping Amanda and Grady’s relationship along but I would have like to have seen his character a bit more developed.

“…If I could package the chemistry between you two and sell it, I’d be Bill Gates. With better clothes. And a more resonant voice.”

The writing style was engaging – some of the turns of phrase painted amusing word pictures which I enjoyed.

Her mind, which had possibly just shaken hands with the first molecules of vodka, unhelpfully provided a movie of Grady Brunswick showering.

Some of it was a bit on the cheesy side, but I don’t mind a bit of cheese occasionally.  It is something which is very subjective so other readers may like it more, or less than I.

“You have champagne?”
“My bedroom is a happy place. Champagne’s a happy drink. Want some?”

In retrospect, I thought the book was too long.  At 384 pages, it is a substantial debut.  Numerous conflicts were introduced into the story – some of which didn’t go anywhere and others of which felt, to me, like authorial manipulation designed to keep the characters apart.  I think it would have worked better if there were less conflicts but more development of the ones which stayed.   While I liked the addition of Luke the farrier – a handsome man who Amanda dates briefly in the book (mainly in order to subvert her attraction to Grady), I was disappointed that he had to be made into a patronising 1950s type jerk to get him out of the picture.  One of the conflicts very late in the book had me a little exasperated – it seemed to come out of nowhere and made little sense to me.

More intimate scenes wait until very late in the book, with one barrier after another hindering the consummation of Amanda’s and Grady’s attraction. There was one scene which may have scarred me for life. I thought it went without saying. But apparently I was wrong.  There is nothing sexy about a snuggie, even when it is being worn by a handsome movie star.  Snuggies leach the sexy in my opinion and I could have used not having the mental picture of Amanda and Grady in snuggies getting “friendly”.

I was not one of those little girls who was into horses and that didn’t t really change when I grew up – I think those who are more into horses will enjoy the book a bit better than I did.  That said, I wasn’t bored or uninterested in the horse information – I thought it was sprinkled throughout the story in manageable bites which I mostly understood (and those few bits I didn’t get didn’t detract from my reading experience).  It was clear to me you know of what you speak in this area and your love of horses and showjumping is evident.   Little things like what sort of flooring is best for a horse barn gave flavour to the setting.

The epilogue was perhaps a little saccharine for my taste, but overall, I found Thrown to be an engaging read.  If the book were shorter, the plot tighter and some aspects of the story a bit better developed, I would have put the novel higher in the B range but as it was, I’m going with a B-.