REVIEW: Through the Evil Days by Julia Spencer-Fleming

If the book interests you, you may want to try out the audio version. 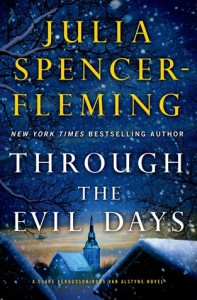 It’s eight books into this mystery series, and the achingly forbidden love between Reverend Clare Fergusson and police chief Russ van Alstyne is finally legally and morally sanctioned. How do you continue to keep the romantic tension going?

By throwing everything but the kitchen sink at them, apparently. On what should be a peaceful honeymoon in a remote cabin, Russ and Clare have to deal with threats to both of their jobs, Clare’s unplanned — and to Russ’s mind, much unwanted — pregnancy, various murderers/kidnappers/meth dealers, a missing child who will die shortly if not found and given medical treatment, and a destructive ice storm that makes the already complicated situation mindbogglingly difficult.

The story follows several threads — primarily what’s going on for Clare and Russ, and what’s happening with police officers Hadley Knox and Kevin Flynn, who are partners and erstwhile lovers. In each thread, the characters are investigating the missing child case while also dealing with some serious personal angst. There isn’t a lot of belaboring of the past, but we’re given enough background info to follow everything; a reader could probably even enter the series here without much trouble, though would get so much more out of it by reading the previous books first.

This entry leaned more towards romantic suspense/police procedural than mystery, and I was mostly happy with the romantic and personal elements. It would have been good to see Clare process around her pregnancy a little more: not only did neither of them want children — both have life-sucking careers, Russ is in his early fifties — but she’s suffering from PTSD and newly sober. Moreover she was unwittingly drinking and using drugs while pregnant, and their child is considered likely to have some special needs. I suppose it fits Clare’s protective and impulsive personality that she leaps to a decision to continue the pregnancy, but some acknowledgement of the serious impact this will have on their lives would have made me respect her more as a character. The lack of it certainly infuriates Russ.

More time is spent on Russ’s journey through anger and resentment, as life seems to roll over him, “one chaotic accident after another.” (He has no idea how very much more chaotic it’s shortly going to get.) When his suppressed feelings inevitably burst out, it’s an exquisitely painful moment for them both.

As a suspense story, this initially felt perfect: tense, not too gory, complex without being too complicated. I compared it favorably to recent Karen Rose books in which not only are the body counts unbearably high, but the threads of all the continuing characters tie themselves into unravelable knots. But then at some point, someone mentioned once again the need to find the missing girl in time, and suddenly I was in an action movie and there was a little clock ticking in the corner of the screen, and I was only surprised it wasn’t one week until Russ’s retirement.  The view of the man behind the curtain continued to dog me for the rest of the story: although the writing is always excellent, the suspense plot began to feel very pat and by the numbers.  The scenes from the missing girl’s point of view are written in a cliched style, more childish than childlike, that didn’t fit the description of her as very bright. Violence against women is also used in a way that felt manipulative. [spoiler]A chilling rape threat against Clare just fizzles out when it’s not longer a useful way to torture Russ. Not that I wanted her to be raped! But the convenience of the plot device really stuck out. [/spoiler]

Countering that complaint, it was powerful to see Clare — who steadfastly refuses to carry a gun because she insists would never use it — putting up a tough fight when she’s in a bad situation. She’s a priest, but she’s also been to war, and learned a lot about survival. Hadley is also very tough in her police work, though she gradually unbends to lean on the emotionally balanced and dependable Kevin when her personal life gets out of control. And since the incredibly rigid conventions surrounding pregnancy and abortion in romance are one of my biggest pet peeves, I’m glad to see a sympathetic and popular character showing realistic emotions around the issues.

As in many of the previous books, the story ends on a bit of a cliffhanger — which did not help my overall feeling of being manipulated — though not the really intense kind that leaves you tearing your hair out in frustration.

I keep going back and forth on a grade, because before I hiccuped on the genre conventions, I thought the book was very good. But in the end, I had to give it a “really liked — with reservations” grade. B-