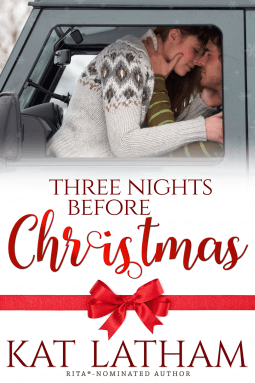 Have yourself a steamy little Christmas…

After three years in prison, freight train engineer Lacey Gallagher doesn’t expect this Christmas to be very merry and bright. At least chopping down trees for her brother’s Christmas tree farm will help her save money to get her life back on track. All her plans derail, though, when her new job puts her in territory patrolled by the man who haunts her dreams—the forest ranger who sent her to prison.

Austin Wilder isn’t thrilled about Lacey working in his forest—but he soon realizes he needs her help. His family is depending on him to restore an old steam train for a spectacular Christmas event, and train expert Lacey is his only hope of finishing in time.

Working together challenges every assumption Lacey and Austin have about each other, and they discover a desire hot enough to melt even the deepest Montana snow. But will the season of second chances be enough to mend the most hardened broken heart?

Despite the slightly misdescriptive title – the action starts in late November – this is a holiday book. The heroine’s family sells Christmas trees! And a lot of the action is centered on getting a Holiday themed park ready in time – one that features a steam train. Am I the only one who still waves at trains when I see them go by?

Wow, okay, we have an ex-con for a heroine and prison hasn’t been kind to her as Austin immediately sees. Her expression is deliberately blank, she answers only and exactly what is asked and nothing more. She’s got facial lines, gained weight and now has some gray in her hair. Lacey is a changed woman in so many ways. When he first meets her again, after he arrested her, saw her trial and she was gone for 3 years, Lacey gives nothing that she doesn’t have to. And something makes him keep needling her until she does. His mother might believe that she’s the innocent daughter of her best friend but Austin caught her red handed.

Lacey had a good job, apartment, friends and a no-good boyfriend she kept believing in. Until his racket got her arrested and landed her in prison. Nothing she said did any good and the worthless public defender might as well not have shown up in court. Now she’s got parole and nothing is going to mess it up and land her back in prison. She learned to survive there but she’s never going back.

Okay, so some excellent conflict here, right? To his credit, and despite what Lacey might think, due to the fact that he shows up in her life almost every day for two weeks and she has to report this to her parole officer, Austin does try and not treat Lacey as a prisoner. The parole board has granted her early release and he’ll try and give her the chance to start over.

As Lacey gets used to real coffee every day, unrehydrated food and the opportunity to pee in privacy after having spent 3 years in a dorm cell, she gets more pissed that Officer Wilder seems to always be watching her – and not in a pervy way though frissons of attraction have passed between the two. When he shows up asking for her expertise, she’s torn. It’s a chance for her to work with a train – win! But she’s also got to be around him which can bring on emotions of fear and anxiety in a heartbeat – so um, maybe not a win. Three years in the slammer are not something a person gets over in a week.

Still, when the train overcomes her reticence Austin marvels to see a woman in her element getting sweaty and covered with machine oil as she excels at something that would have paid her well and been a life long career. He also starts to doubt that someone with a good job and pay would have risked it all like her ex-boyfriend had testified at the trial.

The sexual tension has been building and building and Lacey takes control and decides to go for it. Usually when a character decides to try and “get someone out of their system with sex” I roll my eyes. In this case, after three years with just her hand, getting sex into her life makes sense. I’m still a little conflicted about the first scene when the two get into a situation that Lacey herself describes as like being overcome and I wondered that this would not have brought on her anxieties. I also pondered if she had to report these exact details of “being in the presence of a law enforcement officer” to her P.O. Could make for an “interesting” conversation.

Austin and her conviction status aren’t the only issues Lacey has on her plate. There’s her brother’s festering anger, over her sleezeball boyfriend, that he’s had stuffed inside him ever since her arrest but never voiced so as to avoid adding one more turd to her plate of shit. But now, now it can be said which starts three year’s worth of an argument. Then events, injuries and illness transpire to put Lacey and Austin together in the same living space.

But with Lacey’s chance at freedom, there comes a price. Austin must now retestify. Now comes the finale of the conflict – the last thing to get in their way. Here’s my deal. Generally as with the “let’s have sex and get it over with” above, this part of standard romances annoys the crap out of me as most “end of the book” conflicts come across as made up for the sake of a required separation before twue lurve conquers all. Not this one. Lacey’s negative and panicked response to the whole thing is reasonable as is her need for space. I’m not sure what changed testimony is usually like in these situations but is what Austin tells her he says realistic? Aren’t cops usually “just the facts’?

Even though the course of the story takes place over barely one month and there are a lot of issues being dealt with, I appreciate that Lacey still has some feelings and responses she’ll need to keep finessing as she adjusts to life in the real world. The “ILYs” don’t magically fix everything. I also like that Austin is aware of Lacey’s need for time in working through the lingering effects of what she’s been through. The final resolution is a bit fast for what I’ve heard about the criminal justice system but hey, it’s Christmas, right? But who won the “worst Christmas sweater” contest? B-