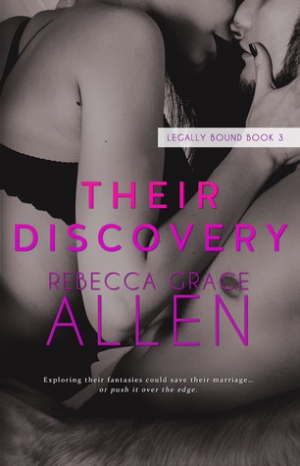 It’s also a marriage-in-trouble story which I have just realised might work better for me in theory than in practice. I am interested in what happens after the HEA. I do like to see established couples dealing with stuff. The last three marriage-in-trouble stories I’ve read/listened to however have been really quite grim. It makes sense and it’s on me for not realising this sooner but for the most part this trope is about dealing with something internal to the relationship rather than external and so there is often not a lot of opportunity for the main characters to be working together to overcome an obstacle. Naturally therefore, there’s a lot of angst before the happy part starts and, because there’s no conflict once everyone is happy, there’s often not a lot of HEA-wallowing with this trope. There are exceptions but they tend to be less common, in my experience.

Sam and Brady Archer have been married for 17 years. They have two daughters, Allegra, 10, and Hope, 7. Allegra has ADHD and it is apparent that Brady does too, although he is undiagnosed when the story begins. Sam had ambitions to be in the thick of politics in Washington DC but she had to leave her role as an assistant for a congressman when her mother became unwell. Then she re-met Brady (they had dated previously while they were both in college), got married and had children and her career dreams were shelved. Now, all these years on, Sam feels invisible and unfulfilled.

Brady doesn’t help much around the house or with the children, particularly with Allegra. He forgets things Sam has asked him to do, he spaces out when she needs him. She feels like she’s the only adult in the house a lot of the time and the burden is wearing.

Brady, for his part, recognises that Sam is unhappy. He loves her and his intentions are good but he has, in some ways, given up trying because he can’t seem to ever get it right. If he loads the dishwasher, he does it wrong so why load the dishwasher? He can’t remember where the things go in the kitchen cupboards. If he remembers to pick up the yoghurt for Allegra from the supermarket he will almost certainly get the wrong brand. Sam is so organised, so good at this stuff, it’s easier for him to let her do it. And at least she’s not mad at him for getting it wrong. He is trying to reconnect with Sam using ways that worked when they were in college or when they were courting but those ways (largely humour) aren’t working now and he’s terrified she doesn’t love him anymore.

Sam, for her part, actually identifies with the Doms rather than the subs and it is only kind of by accident that the couple stumble their way towards confessing these desires to each other.

Of course, Brady’s feelings about his sexually submissive desires are based in toxic masculinity. It does get addressed fairly late in the book. I get that this is a thing that could/would happen and I get that lots of guys have been damaged by toxic masculinity (as well as women of course) but I could have wished that wasn’t what was going on with him. Or at least, that it didn’t go on for so long. I wanted to smack him upside the head every now and then over it. I felt similarly about Sam sometimes too, albeit for different reasons.

I am by no means an expert on disability rep but I suppose it could be said that because Brady has ADHD as well and he is a POV character, that the representation of ADHD in Their Discovery was not just from the perspective of a carer. However, I was uncomfortable with Allegra’s portrayal generally. It wasn’t until right at the end that I saw anything much celebrated about her. Perhaps Sam’s thinking was more a product of her own dissatisfaction with her life but for most of the book Allegra was a challenge and a difficulty and a headache and a worry. While I have no direct experience with ADHD myself, I would have preferred to see Allegra as a more than her ADHD. I did appreciated that later in the book her ADHD is show to be not always a bug but also a feature.

Another thing that made me uncomfortable was the fat representation. Sam had put on weight with each pregnancy and had struggled to lose it. When the book begins she has finally worked her way back to her pre-baby weight. It eases off in the second half of the book but the first half contains a lot of Sam reflecting on how much she hated being fat. Her weight, then and now, is a thing she fixates on. Brady at least found her sexy and beautiful at any weight and I appreciated that but I wondered if the representation overall was fat shaming?  Sam references her weight all the time. She clearly despised being overweight.

I don’t know where the line is; at what point might representation slide into fatphobia. If someone wants to lose weight and they do and they feel good about it, that’s fine, right? I have some personal experience of a weight loss journey and I think it is a fairly common experience that women would want to lose “baby weight”. But there was something about the sheer volume and frequency of Sam’s thinking that bothered me. I don’t think I’m particularly sensitive to this and so if I noticed some discomfort maybe the line was crossed?

I did feel for both Brady and Sam. Both of them were stuck and scared and both of them made mistakes. Both of them needed to change their behaviours and to communicate better in order to get their HEA (re-HEA?) I thought you did a good job of not demonising one over the other. When I was in Sam’s head, I felt for her. When I was in Brady’s I felt for him. Even when I wanted to smack them from time to time I was nonetheless invested in their journey. There were times in the story where I was metaphorically peeking between my fingers, hands covering my eyes, because I could see the train barrelling towards the inevitable smoking wreck and there was no stopping it.

Your Author’s Note at the beginning of the book warns that Sam and Brady make a lot of mistakes, in their marriage and with their BDSM play. And, as much as I did want to bash their heads together sometimes, I did think it was a brave choice on your part to write them this way. They are far from perfect people. Even so, you made them sympathetic and relatable and I was rooting for them to get their shit together and work things out. The changes they each had made by the end of the book were significant and lasting and it was clear to me that the entire family was going to be a lot happier as a result. At this point, I began to get a sense of who the girls were apart from Sam and Brady and apart from each other. While I’d have liked to have seen it earlier, I’m pleased it was there.

I’m very glad the toxic masculinity aspect of Brady’s arc was addressed and he was set right in his thinking. I believed he had confidence in the man he was/is by the end of the story. That was largely his arc actually. My sense was that he thought he was a big fraud for most of his life and he was just waiting for the other shoe to drop, for Sam to find out and leave him. But when he accepts himself and understands himself, he realises he’s not a fraud or a fuckup. That confidence in his value helps him to step up – which is what Sam needs him to do.

The sex scenes are largely where the hope is in the book even though they are not always successful (in fact, there are a couple of encounters that go horribly wrong). But this is where I got a glimpse of what made Brady and Sam good together. Outside of the bedroom they were mostly too caught up in the daily grind and in old patterns and bad habits. I was grateful for the epilogue which helped me see those positive changes and believe they’d stuck; that Brady and Sam would be solid from then on.

I felt a little like I was holding my breath for a lot of the book, waiting for the hammer to fall. This made Their Discovery an uncomfortable book to read but I did believe that Sam and Brady had made their way through to the other side and came out winners.

→ Kaetrin
Previous article: REVIEW: The Accidental Veterinarian by Philipp Schott
Next Post: REVIEW: The Library of Ever by Zeno Alexander