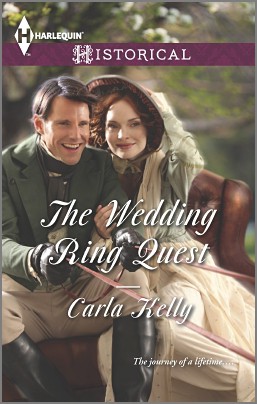 “Searching for a ring…finding a family!

Penniless Mary Rennie knows she’s lucky to have a home with relatives in Edinburgh, but she does crave more excitement in her life. So when her cousin’s ring is lost in one of several fruitcakes heading around the country as gifts, Mary seizes the chance for adventure.

When widowed captain Ross Rennie and his son meet Mary in a coaching inn, they take her under their wing. After years of battling Napoleon, Ross’s soul is war weary, but Mary’s warmth and humor touch him deep inside. Soon, he’s in the most heart-stopping situation of his life—considering a wedding-ring quest of his own!”

I totally agree with you about this cover. Instead of winter travel in a post chaise, we have a young buck (with both legs) who looks as he and a giddy heroine are about to set off on a London to Brighton wagered race. And where’s Nathan? Ah, Harlequin covers, you gotta love them.

When I saw the (incorrect) cover and read the blurb, I was excited that the book was a Regency. I do love your American frontier westerns but your Regencies are what I started with and reading one feels like coming home. In a way, the book has a lot of similarities with past Kelly books. It’s a Regency road romance featuring likeable if slightly downtrodden characters one of whom is a military man. There is a degree of instant attraction between Ross and Mary though neither is going to act on it for various reasons. The reason for the “Quest” is slightly silly, TBH, but one about which I can shrug and say, “why not” and “I’ve read more contrived plot premises than this before.” In the end, it gets our couple together, on the road and with time to start their romance.

The trip itself is fun to watch though a journey from the Scottish border through York and back through a Regency winter was probably no picnic. Bad inns, cold weather and a vindictive slacker from Ross’s past bog them down slightly but through it all, they manage to maintain their good cheer if not dry handkerchiefs. Yes, tears abound as the trip turns into far more than tracking down a lost ring.

Mary and Ross are both at a crossroads in life though neither actually realizes it. Mary has lived her adult life with relatives who care for her and treat her fairly well but in all honesty, she now begins to see her future spooling out in front of her with little variation or chance for change. Ross has danced to Boney’s tune as have most British military men for the past twenty years and though he loves the Navy and life at sea, the things and relationships he missed on land are adding up. An unintended side trip Mary engineers serves to show Ross both the cost of the life he’s lead and how much he can bring comfort to the people the butcher’s bill have left behind.

The people they meet along the way help Mary and Ross make decisions about themselves and spur the actions they take. I did think the Rennies’ initial easy camaraderie and exchange of information was fast but even more so is when they spill the whole story to complete strangers – my that York one was record time even for today’s “tell everyone your life story the 15th second that you know them.” I had thought this more an American thing than something that – even today – is common in the UK.

Things were going along well, feelings were being felt – though Ross needed a good knock upside his head for the sometimes thoughtless comments he’d make to Mary about his “perfect woman” – until a point when Ross loses it after he decides Mary is bamming them about her trip. Why? It seemed out of character for him even as a post captain who doesn’t suffer fools gladly. He’s instantly repentant but thank goodness the postilions and Nathan give him quiet hell and Mary Rennie proves her bona fides and lack of pettiness when she doesn’t backhand him. Though he deserved it.

The next section of the book is quietly wonderful. I felt much more comfortable with the extra months at end of fruitcake journey that allowed for the resolution of everyone’s business. After returning to Edinburgh, Mary stands her ground with her family and manages to get her way. Her adventure shows her that she’s not going to be content with her lot of sitting in Wapping Street for the rest of her life. Ross’s questions to her about what she could do with her future has given her the courage to think about changing it for what she wants and she discovers she enjoys making her own decisions.

Meanwhile Ross thinks long and hard about his own future and his relationship with his son before having to finish up what his “employer” restarted after escaping from Elba. He also starts to face what the past twenty years have done to him as a person and if he can find his way to a future. His “almost” action seemed a bit melodramatic for the way his character had been shown up til then but on second thought, this seems to be an issue for a lot of military men.

When Ross finally makes his move and goes after what he wants, I was pleased that Mary stuck to her guns about earning her own money, emigrating and making up her mind about marrying Ross even though she loved him. Her hesitation to “say yes” is with good cause and not just because he’s not said the three magic words. She’s convinced that he’s the kind of man who lives for danger and the thrills of combat and command. She thinks she has nothing to offer him that would take the place of this and it’s not until all this is settled that they’re ready for their HEA and it’s not until Ross has convinced her about how much she adds to his life that she changes her mind.

At first glance, this might sound like just another light and frothy Regency. But upon closer inspection, it’s much deeper and delves into the issues facing an older, unmarried woman of the day and an almost retired lifelong military man of any era. It does get a little sappy at times but smartens back up and allows a sufficient amount of time, thought and effort to go into this relationship to convince me that it will last. B-