The Unseen, released last year, was originally planned to be the first of 4 linked (serialised?) novellas, a spin-off of the Elder Races series, set in the fictional Other Land of Rhyacia. As it happened, due to events since then, The Chronicles of Rhyacia was reimagined as a duology. The second and final book in the story, The Adversary is out now. You were very open about the earlier book ending on a cliffhanger (thank you!). Anyone familiar with my reviews or my reading will know that cliffhangers give me hives so I elected to wait until the series was complete and then read them in one go. Hence, I’m reviewing them together.

To avoid spoilers for the first book, I will be a little vague on the synopsis of the second novella.  I figure there will other readers like me, who will not have read the first story yet.

While the duology has been called The Chronicles of Rhyacia (I don’t know if there will be more books set here in the future but I’d read them if there were), the books also properly fit within the Elder Races series (described as books 9.9 and 9.95 respectively on Goodreads FWIW). They really cannot be meaningfully read without understanding the world and the characters already.   There’s a wealth of worldbuilding and character development that sit behind this duology. New readers could read Dragon Bound (which still Holds. Up.) and the other books and novellas which feature Pia and Dragos but I’ve enjoyed all of the Elder Races so I recommend starting at the beginning and letting the series unfold as it was published. It’s also impossible to talk about these books without giving at least some spoilers from earlier books in the series, so mild series spoilers follow. 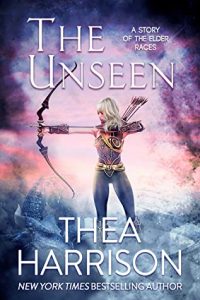 At the end of Planet Dragos, Pia and Dragos had decided to move permanently to the Other Land of Rhyacia. They have a new baby, Niall, who shares the same Wyr form as Pia and it will be easier to protect him away from New York and the rest of the world we readers know. There are other reasons too but that was a main driver of the decision. In this first novella, the couple finalise plans and then actually do move to the Other Land as planned. There are developments involving Tiago and Niniane as well and some suggestions of just a tiny bit of trouble in paradise between Pia and Dragos.

Even though they love each other deeply and have been through much together, in real terms they’ve been together only a few short years and in some ways they are still getting to know one another. Dragos is such a powerful ancient being with tremendous force of personality, sometimes Pia has to stand strong to maintain her own independence. It can be easy to forget that Dragos has so much history behind him. In terms of time, his marriage to Pia is a drop in the ocean and for millenia he had little care for the kinds of things Pia, who was raised with humans and is significantly younger, holds dear. There is a constant push/pull between Dragos’s essential nature and his equally powerful desire to care for Pia as she needs it. While Pia is small in size compared to Dragos, she nonetheless is not afraid to stand up to him – it’s one of the things which attracted him about her. Their differences are not things which felt like they would ever seriously threaten their relationship however; they’re more… domestic workings out, smaller issues which come up as a marriage deepens and grows and things inevitably change. They’re little “conflicts” rather than dark moments.

Before the couple leave for Rhyacia, because reasons there is an unexpected canine addition to their household and a fair bit of the humour comes from Dragos’ reaction to suddenly being a pet parent – something he never planned or wanted. To him, dogs are a “rejected snack”. Dragos is a dragon after all, a predator who most often looks on lesser creatures as prey. But, he will do just about anything for Pia, so…

This story does end on a cliffhanger, as advertised. I won’t go into precisely what happens to Dragos but the synopsis for The Adversary describes him being in a battle against an unseen foe who “doesn’t have a body” and who “can invade and turn his own mind against him”. That does describe things accurately, albeit it leaves a lot to the imagination. It’s left to Pia and Dragos, with the help of their friends but mostly separate from one another, to do battle in their own unique ways against this unseen foe,  to uncover the secrets of Rhyacia and keep their HEA intact.

This novella picks up straight after the events of The Unseen. Pia and Dragos each have their own battle to fight but fortunately their friends are there to help. All the original Sentinels and their partners, and most of the new ones, are there, as are Liam and some other favourite characters from the series, including Grace & Khalil, and Morgan le Fae & Sidonie from the spin-off trilogy Moonshadow.

Dragos and Pia have to identify their adversary and find out a way to defeat him, possibly with the help of some of the “unseen”. Along the way, everything Pia and Dragos hold dear is threatened. CW: There is some non consensual touching (the adversary is a very bad dude) but fortunately things didn’t go farther than that.

I thought the method the adversary uses to attack the main characters was very interesting and unique but I can’t be more specific about it without revealing spoilers. It did get me thinking about a few things and how much more difficult and complicated they were to deal with because of how the adversary worked. (How’s that for vague? Sorry.)

I don’t hold it again you that what was originally intended to be 4 novellas turned out to be 2. It happens. Necessarily though, the first book starts a number of threads which don’t get enough page time to be fully developed in only 1 other novella. For example, the storyline about Tiago and Niniane doesn’t go anywhere and is left unfinished. The suggestion of (mild) trouble between Pia and Dragos similarly is dropped and overtaken by the drama of The Adversary. The dog subplot also got short shrift in the second novella. I was less bothered by the latter two threads, but I do hope that readers get to find out what happens with Tiago and Niniane at some point in the future. It seemed pretty important.

Perhaps also because the series was truncated, things move very swiftly in the second book and everything is wrapped up very quickly. There are issues between Liam and Dragos which are resolved a little too fast (- to be fair, the resolution in the book does say that true healing will take time but it still felt a little underdone) and an entire plot point which could have been taken up was unaddressed. If there were issues between Liam and Dragos, why were there not at least adjacent difficulties as between Dragos and certain of the Sentinels because of what they had to do?

Also, and this is very much a personal thing, but I had mixed feelings about the running joke about Niall being a “little shit”. While I completely understood the vein in which it was intended, I felt a bit strange about it. Words have power after all and a child can be scarred by some of the words used toward or about them even in jest. Then again, it is a bit of a personal hot button for me for reasons and Niall is a fictional and supernatural character so it’s very possible this is a Kaetrin thing that will not apply to anyone else.

On the other hand, I am a sucker for a rescue and in this duology there are multiple opportunities for one or the other (or even both) Pia and Dragos to do some impressive rescuing and the angst in the lead up thereto was Kaetrin catnip. Dragos’ Achilles heel is his love for his wife and children and seeing him react emotionally to that does make me go a little squishy. And, Pia and Dragos are some of my favourite fictional characters and it was good to spend time with them again.

Because I read the novellas together, I will grade them together as well. In my brain, The Unseen is more of a “prequel” as the story being told is unfinished by the end. It would be really difficult for me to grade it as a stand alone and probably unfair given how I feel about cliffhangers.  Over all the duology gets a B- from me. I liked it but there were a few things left undone.

→ Kaetrin
Previous article: REVIEW: The Woman They Could Not Silence by Kate Moore
Next Post: REVIEW: A Comedy of Terrors by Lindsey Davis