REVIEW: The Principle of Desire by Delphine Dryden 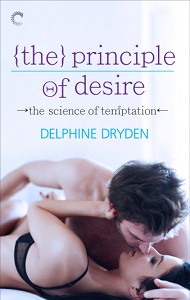 Seriously Switchy @Beth28 27d
Some guys need to learn how to take no for an answer. #subtweet #movingon

Rocket Man @MisterEd 5d
When you offer to be someone’s fake boyfriend and find yourself tied to a whipping post. And it’s fun. #whatthefrak

Seriously Switchy @Beth28 4h
My playlist: Torn between two lovers. Do I stay or do I go now. Breaking up is hard to do. #FML

Rocket scientist Ed may be smart, but he has no idea that several of his friends and their girlfriends have a secret life. When he uses a tracking app to find the phone he left in Ivan’s car, he discovers that they belong to a members-only club — and so does their very attractive friend Beth, whom he had just met that evening. Beth brings Ed in as a guest, leading other club members to assume he’s her submissive. When Beth’s former Dom — who still thinks he’s current — arrives, Ed offers to play along in exchange for a real date later. The play gets more serious than either intended, and both find themselves enjoying it.

Unlike the previous books in the series, the focus here is less on a newbie being introduced to BDSM than on the journey of  the more experienced partner. After years of being submissive to Aaron, a much older and very controlling man, Beth has been exploring her dominant side. With Ed, Beth discovers that it’s possibly to have kinky fun without specifically constructed roles and rules — to have a playmate, rather than a Master, “someone who was neither top nor bottom, but a fellow adventurer.” And she starts to wonder if Ed could give her the other things she wants out of life.

I enjoyed the originality of Beth’s journey, as well as the unique and authentically geeky Ed, with his “unshaven, unwaxed, non-metrosexual and non-ripped torso.” He’s “softer and furrier” than Beth is used to… and comfortable looking. Love it! Beth and Ed are sweet and playful together, and there’s some banter that had me laughing out loud at times. But I think too much story is stuffed into too small a space here. Not only do things move very fast between Ed and Beth, but Beth spends a significant part of the story thinking more about her ex than about Ed. His hold on her is understandably strong given their history, but, well… this is supposed to be a romance, too. It’s hard to get into sex scenes in which one character is constantly thinking about someone else, and being depressed about it, and the progression of the story only increased my doubts about whether Ed and Beth could wind up together. All of this might have worked beautifully if it were given more room to develop.

Readers who are looking primarily for depictions of the BDSM scene may appreciate this more than I did; they seem respectful and realistic. For readers of the previous books in the series, note that it gets a little further out there than I remember the other books doing: the main characters and those from the previous books all “play” together (apparently non-sexually), which is a little startling if you expect absolute monogamy in your romance. It’s not necessary to have read the previous books before this one, but it is fun to see the characters again, including the inflexible Ivan getting discombobulated as his Venn diagram of geek friends and kinky play friends begins to increasingly overlap.  There’s also a short bonus scene from the point of view of Cami from The Theory of Attraction, for those who want to catch up with her relationship with Ivan.

Ultimately, though I think this is definitely worth reading as erotica, I couldn’t help feeling that it didn’t quite fulfill its contract as a romance. B-