REVIEW: The Sweet Scent of Blood by Suzanne McLeod 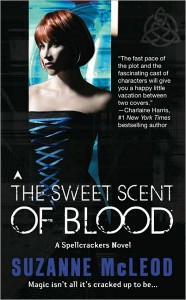 While I am   often skeptical when going into escapist genres like fantasy and science fiction, but the one that I always come back to and am comfortable with completely  is the paranormal genre.   Vampires are becoming played out and it’s hard to find a fresh face on them, but the blurb by Charlaine Harris, whom I really enjoy reading, along with the interesting urban fantasy/mystery premise really made it sound good enough to try.   I was mostly pleased with what I got out of reading it.

Genny Taylor is living in an alternate London, where fantasy creatures of all types exist, and have recently begun integrating into society within the last hundred or so years.   Fairies, goblins, and vampires – along with many other mythical creatures – are just beginning to be accepted into society, especially within hot tourist spots such as London.   Genny’s a sidhe, or fairy of ‘royal’ lineage, which means she isn’t the most common thing, even by magic’s standards, to grace London’s streets.   She carves out her living by working for Spellcrackers.com, an organization run by witches that deals with the ‘cracking’, or destroying, of spells for customers.

When a famous vampire – known for being a part of a prolific vampire calendar showcasing hot vamps – is accused of murdering his love, Melissa, and sucking her dry, things get complicated.   The vampire’s human father comes to visit Genny with a request to view Melissa’s body.   Witches and vampires aren’t on the best of terms, and taking the job could mean disaster for her job at Spellcrackers.   Things don’t exactly work out, and before Genny knows it, she’s shoved into a vamp power-play that could leave her changed forever.

The best thing you do as an author in this novel is within the character creation.   Genny is the epitome of my ultimate, kick-butt urban fantasy protagonist.   Her thoughts are swirls of snark and wit, and I loved her brand of intelligence.   A big problem with these novels is a protagonist that’s billed as smart but never really shows it, and Genny avoids this in every way possible.   I also loved her relationships with the other characters.   Finn is probably my favorite male of the bunch – a satyr with a fun personality and a really enjoyable White-Knight complex that manages to blow up in his face.   Other characters included Hugh, a rock troll that has a brotherly affection towards Genny, and Toni, a secretary at Spellcrackers and a character that amuses and surprises at many turns.

Your plotting, however, left me disappointed in some areas.   While I was enraptured for a good part of the novel, the mystery part of it never took off the way I thought it would.   While Genny herself admits repeatedly to not be a detective, you pulled me in with a mystery, and a lot of what was going on  had  seemingly no relation  to the mystery part of the  plot.   As an advertised part of the story, I expected a clearer mystery and one that seemed  more focused.   The intrigue with the many back stories and hidden agendas were interesting despite the lack of focus on said mystery, though I would take care to not put in too much unneeded information, as the fuzziness of the focus made the purpose of the backstories less clear.   I liked the idea that not everything Genny gets is going to help – because convenience is not realistic, and the good hallmarks of an urban fantasy involve it’s possible realism – but there can be too much of a good thing.

World building and writing style  are your biggest strengths here.   You have a good grip on similes and metaphors, and your word-choice offers  a  nice compliment to the modern fantasy setting.    Managing to make faeries and other mythical creatures seem so  modernized is a  task you’ve  accomplished well.   Not only do you write characters with finesse, but your world building is impeccable.   Every detail in this book reflects that, with the talk of the other races, their history and habits, and their placement in modern society.   Vampires run bars.   Brownies are nannies.   It sounds simple enough, but you manage to include subtle tidbits of information about each race and the relationships between the different species and magical creatures that run through London’s streets.   The only thing I did not appreciate was the Brownie’s accents.   Accents are hit-or-miss for me, and it had so many shortenings of words that it didn’t read in a flowing manner.   What made this world-building such a strength, though, was your ability to interest the reader in it.   Sometimes I could care less about a world and want the author to shut up about it.   If I can get interested, though, I want to stay in it far longer than the book allows me.   The only other thing that really deterred me was that it had some editing errors in multiple parts that could have been fixed, considering that this book came out in the UK a year or two before.

The Sweet Scent of Blood is a great addition to the urban fantasy/paranormal market, and I’m happy to see such a fresh take on the genre that’s written so well.   I loved the characters and the detailed world building, but the plot was muddled in places and the editing really did not do it for me.   The good outweighs the bad, though, and I’m very interested in continuing to adventure with Genny and the Spellcrackers series.   B-

→ John
Previous article: Jayne’s Offline
Next Post: REVIEW: One Dance with a Duke by Tessa Dare