The blurb for this one just sounded like so much fun that I hurried to snatch it up from Netgalley. A superheroine with family issues – namely an ex who had turned evil – and who has to worry about childcare. These are certainly not our grandparents’ comic book heroes anymore! But wait, there’s more. Much more as you pack lots of different angles into a compact story that’s easy to read in one sitting. It has a few rough edges but overall I enjoyed it. 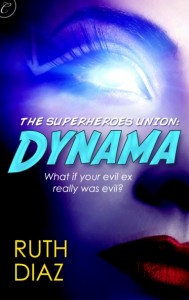 It starts out as a normal day for TJ and the Invincible Woman (aka Vincy). Get rid of a mutant creature created by the Iron Fist organization, save the inevitable small child who’s wandered into the path of danger then it’s time for after school with seven year old twins Esteban and Marisol. TJ’s so busy when the twins get sick and she’s waiting for the Union supplied child care – the Union, it’s not just for pensions and healthcare these days – that she misses the first reports that her evil ex Jon, aka Singularity, has been involved in a prison break. She knows he wants to rule the world according to his own guidelines – honestly, why he can’t see that this is still wrong is beyond her – and get the kids back.

In the past six years, she’s given up her public persona of yellow clad spandex and now blends into the crowd and uses the name Hidden Hand, but it’s only a matter of time before it’s likely Jon and his evil cohorts will uncover where she lives. Meanwhile, two puking kids are running her ragged. That is until Annmarie arrives. As the daughter of two supers, she knows all about the time demands of saving the world. It’s the reason why when when no powers ever manifested in her, she decided to go into child care in order to help take care of the ones who get short changed while the parents are out battling evil.

Esteban and Mari are fantastic kids but TJ isn’t so bad either. Annmarie hopes she’s not the only one who’s feeling the spark of attraction and when the opportunity presents itself, she’s more than willing to see where it might lead. But with a determined ex out to get his kids back and – oh yeah, take control of everything – does TJ even have time for any thoughts of a future together despite how hot things heated up to last night?

Some of “Dynama” sounded a little tongue in cheek, especially the Human Relations aspects of the Union. And the forms needed to be filled out to get a new phone number even in a crisis. Yep, got to fill out those forms. I liked the super powers that some of the characters have and how you’ve moved those into the 21st century with a techie superpower heroine. Other things made me groan and roll my eyes in disbelief. TJ’s boss can get her info taken out of the work computer but her info is in plain old filing cabinets!? I realize that there must be some Achilles heels scattered through the story where needed in order to allow Good to be menaced by evil before triumphing over evil but, I repeat, filing cabinets??

Since one of the “hooks” of the story is the fact that TJ is a mother with all the attendant worries and issues, I enjoyed seeing how involved she is with her children and how central they are to her. Annmarie’s background is as a child who was shunted down the totem poll of importance below her parents’ job but TJ could never be accused of that – not that she’d ever put her children second. Marisol and Esteban are darling but also a handful once they’re well and raring to go. But they’re smart too so I was glad that no one talked down to them, even when the moment of crisis hit.

The super stuff had both good and boring moments. It seems like you had a little fun with the stereotypes during the “in media res” beginning. Once TJ realizes where her ex is likely to show up, she heads there with some backup to try and catch him and, quite frankly, I kind of Zzzzzed out. Underwater turbine engines and tidal flows just don’t match the thrill of watching a train being saved from plunging off a trestle track or a building from toppling over. I hope the Union gets Singularity to cough up how he so easily tracked down where the children were being taken so that Steps Can Be Taken to prevent this in the future. Cause, it seemed like it was really a cinch for him.

But hold on, I still haven’t talked about the romance in the story. Sure the sexing is hot and the relationship starts out mainly physically but you manage to inject an emotional component instead of staying strictly in the erogenous zones. Though the only current relationship is between TJ and Annmarie, TJ is obviously bisexual as she had a happy marriage before Jon got ideas of grandeur. She is also proud to be a Latina super heroine as well though this isn’t played up as much as I might have hoped. One thing that did annoy me here is something I often have a problem with in stories that combine romance with the threat of danger. TJ’s ex is on the loose and she knows he’ll be coming after their children so what does she do but spend two nights making whoopie. Is there some pact between she and Jon that he’ll only make his move by day? You were limited by the shorter length of the novella but still part of me always gets irritated by these shack up scenes when known danger is lurking just off page.

I get the feeling here that you plan a series about several of the other supers who were introduced in this story and based on how much I liked this one, I’ll be looking forward to what you plan to do with them and their private issues and how you’ll update them into the 21st century.