REVIEW: The Submissive by Tara Sue Me

I picked this book up at Amazon after being somewhat intrigued by the premise. I’ll freely admit that while I disliked 50 Shades of Grey, I was captivated by the “the love of a billionaire” trope. I found out after reading your book that it is also Twific. I found it to be better written and better edited than 50 Shades of Grey, which enhanced my enjoyment of it quite a bit. 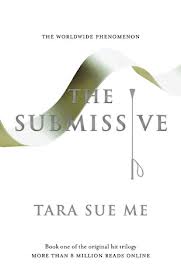 Set in New York, The Submissive opens with Abigail King being conducted into Nathaniel West’s office. Nathaniel is widely known to be one of the most powerful men in business. But Abby also knows a lesser known fact about him: he is a Dominant who is seeking a Submissive. Abby desperately wants to fill that role. Nathaniel agrees to allow her to come to his estate for the weekend to see whether they’ll “work”. He’s aware that Abby has no training as a Submissive, so he’s agreed to train her as well.

When Abby arrives at Nathaniel’s home, he has laid out explicit rules for her, which he expects her to follow without complaint or hesitation. Their first few sexual encounters involve training and some light D/s behaviors, but mostly it’s about her understanding his expectations for her. At the end of a weekend that completely overwhelms her, Nathaniel offers her his collar, which she eagerly accepts. They are together on the weekends, and then Nathaniel begins visiting the library where Abby works during the week as well.  The more time with Nathaniel she spends, the more emotionally attached she becomes. He overwhelms her sexually and is meeting every dream or wish she ever had. While she is falling for him, she’s unsure of how he feels about her. He is inscrutable and often distant. But occasionally he shows small signs that his feelings for her might be something more than what she’d originally assumed. As he introduces her farther into his life, she meets his friends and family, and they tell her over and over how much he’s changed. How he smiles more often, talks about her frequently and really seems to be falling for her. This only makes Abby fall more deeply in love with him. Nathaniel has warned her time and again not to fall for him, but Abby can’t seem to help herself. After a night of truly torrid passion where Abby feels they’ve really connected, Nathaniel is distant, preferring to go back to the way they were before. Can Abby make him see that what they have is worth fighting for?

When I started reading this book, I didn’t much like it. I felt that Nathaniel was perfunctory with Abby, almost business-like. Since the story is told first person, only from Abby’s perspective, I found Nathaniel pretty unlikeable, given that it seemed Abby was the only one feeling anything. But as the story unfolded, and Abby meets others in Nathaniel’s life, and we the reader get to know him, it becomes easier to understand why she would fall for him. Nathaniel is definitely a wounded soul, and his defense mechanisms make him distant. As we learn more about his history, I found myself softening towards him. And when he and Abby have their big fight, man does he give good grovel. The sex scenes are very spicy, although the BDSM element is quite tame, and certainly nothing that exercised my comfort or squick level at all.

If I had any quibbles, it’s that Abby is quite the Mary Sue. But then, knowing that the book is TwiFic, and she’s loosely based on Bella Swan makes her behavior more understandable. The book is also clearly derivative of 50 Shades, although the little bit of research I did on Google made me think that perhaps this book came first. My biggest complaint is that I understand that this book is the first of three. The book ended on a definite HFN note, with a resolution that I actually bought, so I was surprised to hear there would be two more featuring this same couple – it feels unnecessary. I found your writing to be strong enough that I’ll probably read the next book, but I guess I’m confused about what more there is to tell about this couple.

Overall, I found The Submissive to be quite well written and certainly entertaining enough to keep my attention. If a reader is looking for a book that offers the same elements as 50 Shades of Grey, but is more strongly written, I’d say The Submissive is up your alley. I give it a B-.

→ Kati
Previous article: Sunita’s Top Reads of 2012
Next Post: Tuesday News: What are you looking forward to in the New Year?; Banished words; Favorite books