Landing the PR contract for North Carolina’s new soccer team could take Holly Taylor’s career to the next level. Her task? Make Kepler “Killer” de Klerk, an athlete with a party-hard reputation, a star. But revamping the sexy footballer’s image while battling her unwanted attraction to him is easier said than done.

The car accident that derailed Kepler’s European career also gave him some much-needed perspective. He’s ready to give up on fame and focus on the game he loves. The last thing he needs is a headstrong brunette pushing him back into the spotlight, even if butting heads with her is the most fun he’s had in ages.

The more time Holly spends with Kepler, the more she sees how different he is from his tabloid persona. But when she’s offered her dream job for a price, she finds herself torn between the career she’s spent years building and the man she doesn’t want to give up.

This is my second sports romance in a month which is quite unusual for me. But I’m trying out sports I don’t generally follow so footie (soccer to the US) it is. While I ended up liking the sports aspect of the story, the set up and resolution of the romance conflict felt very tried and true and nothing new. 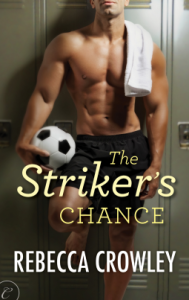 First off – why do so many romance heroines have to be so insecure about their looks? Here is Holly, slim, medium tall, nice hair and she has no self esteem whatsoever. Kepler thinks she’s beautiful from the get-go but more often than not Holly mentally denigrates herself. Then comes one of the standard romance scenes of Holly getting tipsy and whinging to Kepler about how she’s so much less pretty than her sister. Of course she hasn’t had sex in ages. Maybe I’ve just read too many of these set ups before but I’m tired of this.

Meanwhile Kepler is handsome and gobsmacked when he discovers what Holly thinks of herself. One change I am happy to see more of is the thought-to-be rake hero who turns out not to be as rakish as everyone thinks he is. Holly has seen the British tabloid photos of Kepler with gorgeous women hanging on his arm but in actuality, he’s much more restrained about who he beds – especially in comparison to his early, young, wild days.

The conflict between Holly and Kepler – that she’s building him up and burnishing his rep so that his US team can sell him off to the highest bidder – is revealed early on as are the two villains – a freelance reporter and the Evil Corporate Henchwoman. And just as most romance readers will guess, Kepler finds out before Holly can tell him of her change of heart. The main difference in how it plays out is that a few months actually pass before the reunion scene. So there is that.

But I said I mainly picked up this book for the sport and this didn’t let me down. Kepler feels like a guy who is on the downward side of his career, who has seen it all and is tired of the manipulation and lack of control he has over it. The media has blitzed him in the past so he has no love of the PR spots Holly sets up for him. He does realize that this opportunity with the US team is probably his final one and he’d better make the most of it. I love the transition for Kepler from last chance, to team leader, to inspiration for kids. I can see him settling into his new leadership roles and the maturation that follows.

I also like that he redeems himself with the press and fans by his own actions rather than the fluff stuff that’s fed to the media. The game descriptions sound correct but don’t quote me on that. At 31, he’s also getting old for a pro athlete and this isn’t papered over. His hamstring tightens up, his ankle can get gimpy, and post game ice downs are a matter of fact. Despite all this though, his love for the game and determination to play his best shines through. And that is why my grade rises above average and is a B-